Hi all - any good recommendations with local tradesman who specialise in rodent control.

Can hear the little things at night… Any idea on costings and timings would be ideal too.

I’m hoping it is mice rather than rats.

Check with Lewisham councillors. They often provide these services.

I used a similar service in Southwark and it was excellent.

Envirocall at Lewisham were very good.

Thanks - i did read an earlier thread that suggested they visit three times but over quite a long period, which isn’t helpful.

I had mice a few years ago and managed to get rid of them myself so don’t rule the DIY option out. I would say don’t waste any time - where there’s one, there’s likely to be more rapidly. I heard them under my bed and was sure there must only be 1. I caught 9 over 10 days!

Step one is usually trying to identify where they might be coming in - that’s harder when there are floorboards, gaps at skirtings etc as they can basically get through a crack less than a pencil width. And, if you can, block those up with more than just plaster - wire wool is useful. I’m in a very old property with lots of ‘routes’ in so I failed at this part! You can sometimes see a faint brown smear if you have white skirtings where they are rubbing along them.

Next - I got old-fashioned traps, baited them with a nut or soft fruit that had to be pried off the spike - and laid them out perpendicular to the skirting boards where I was hearing them. Wear plastic gloves when baiting so your scent doesn’t end up on them - and obviously when disposing. You can vary the bait and the positions slightly every couple of days. I caught 8 this way - and the traps seemed relatively humane with death seemingly instantaneous for the couple I witnessed.

If you (and your neighbours) don’t have pets or young children, poison is worth considering too. It tends to be an anti-coagulant so that when they squeeze through small gaps, they bruise themselves and bleed internally. I’m told that it’s painless and they tend to lose consciousness and don’t wake up. But there’s always the risk that they die in an inaccessible area and you’ll end up with the smell etc.

Plus one for mouse traps, these traps are cheap, longlasting and very effective, a bit of banana or peanut butter brings them into the trap and the strong spring means an instant despatch. The clever design means you never need to handle the mouse,

Filling gaps where mice can access with tin foil also seems to work. 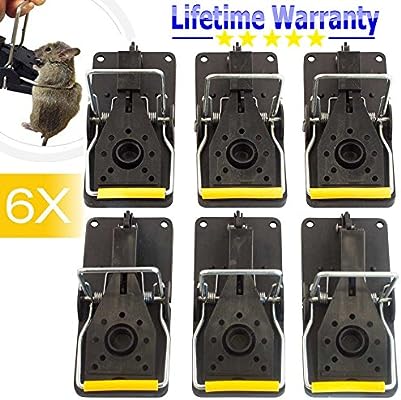 Mouse trap is easy to set, easy to biat ✅ Strong force, worked senstive ✅ Get rid of the mice clean ✅ Release mouse without touching the mouse ✅ Reusable, Durable. It is easy to set and trigger easily ...

I agree with @applespider, we have been plagued with them over the years & a neighbour a few doors down with 2 young children had them at the same time!
Sticky traps (don’t know if that is what he was talking about) with poison positioned in front. Also very important keep all floors & work surfaces spotlessly clean, one crumb is a meal. Also as apple spider said fill all holes with wire wall or Brillo pads, they can’t chew through them.
Funnily enough when ours finally disappeared, so did our neighbours! There are a lot of cats round here roaming about, so we are hoping they are catching them before they come indoors

Lewisham Council will just do the same as above, we tried them.

Has anybody had a company in to ‘rodent proof’ their house? We’ve been quoted over £800 over the phone which seems like a lot but I have nothing to compare against. Our house is clean and the poison is working but we want to solve the root cause wherever the mice getting in. Thanks

Also keep your garden neat and tidy removing areas where they may hide before entering your house.

Plus try products like this and there are other variants too:

Bear in mind a mouse can squeeze through a hole that might only be as wide as a pencil so if you use these mesh products make sure they are nailed or clipped very closely into place.

Thor’s advice on traps is solid too - although if you have kids you may want to use a humane non-killer variety where you can employ a euphemism and tell the kids you sent your captures to the farm in the country.

My recommendation above took care of rodent-proofing the house before installing bait traps and several visits to follow up, at less than half the price you’ve been quoted.

Thanks Sherwood, anon5183jd and jonfrewin for your quick responses - much appreciated!

Bromley Council have a recommended contractor, which at the time, charged £75 for 3 visits.

May be worth checking to see whether Lewisham Council does something similar?