Just on my way back with the kids from a matinee showing of Aladdin - this years pantomine at the Catford Broadway Theatre… and is it any good? I’d say a very definite ‘Oh yes it yes!’

If some good fun songs, tounge in cheek jokes and a bit of ‘he’s behind you’ is your thing, then it’s definitely worth a look. 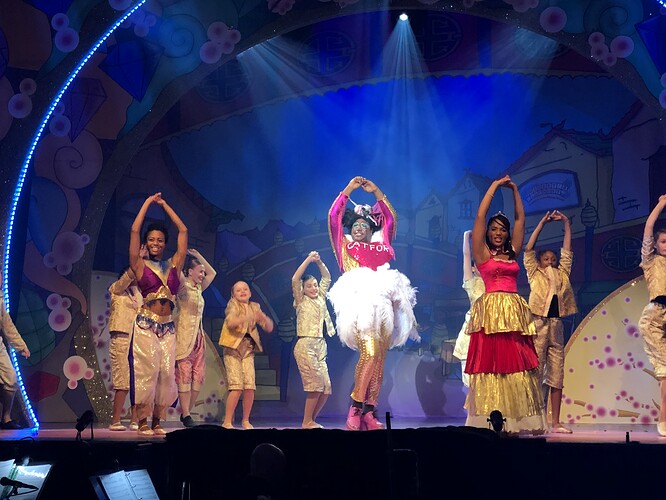 Hey Simon. I did think about going. Would it also be good for grown-ups without children? Or is it firmly in the kid’s camp.

I love a pantomime. We’re off to Cinderella tonight at the Palladium.

Hi Simon - my kids were at the same one - sadly I am ill and tucked up in bed. The kids said they loved it though.

I’m hoping they make this an annual event as it would be cheaper and more local than other pantos! I heard it was the 1st time in 4 years they had a panto so hopefully people get down to see it - I think they might want to advertise it a bit more next year!

They probably have no budget for advertising!

Aw - you missed a good show, hope your feeling better before Santa drops by. Christmas feeling ill with a couple of excited bunnies running round can be trying at best

I actually went to the last panto 4 yrs ago - and to be honest, I walked away a little disappointed. Pleased to say that everything about this years one very much improved - acting, singing, script, production. I’m still a little in shock at how good it was.

Hey Starman - you certainly don’t need to be a child to enjoy a good panto, but being a matinee performance - it was definitely aimed towards the kiddies, and a happy kiddie is a happy parent after all

I’d like to think that the evening performances attract more patrons sans kids - and there’s definitely enough in the script to tickle a more mature funny bone.

@Sherwood in fairness I don’t know what they did, maybe I missed it. I’d just like to see a panto there each year, but if not enough people know about it, won’t happen.Lots of theatres make shedloads of money from Panto, no reason Catford could not.

@armadillo my wife said it was good also. Glad to hear it was better than before!

I’d just like to see a panto there each year,

Based locally in Deptford, International producers Selladoor, have made a 5 year commitment to work alongside The Broadway Theatre to present the annual Pantomime.

Selladoor Worldwide are an award winning production company, touring shows the length and breadth of the UK and Internationally.

For publicity they are on Twitter.
They usually advertise through all the local primary schools.
They seem to be getting good reviews.

Welcome to Magic at the Musicals

If you've found this page then you're obviously a fan of musicals, so we...

It’s a good price, but has the condition that ‘The Broadway Theatre will allocate seating prior to arrival’, so you don’t get to chose your seat.

This is what my wife and kids did, with others, they just give you the best seats they have left (and they got decent seats). I’d recommend it, of course if you want guaranteed seats you can go full-price, which is still good value compared to the ‘big’ Theatres and pantos. They won’t just stick you at the back, and I suspect it works quite well for all.

I was just debating what to do since I am taking my 3 y.o. who may or may not have the concentration span to enjoy it and would probably struggle to see the stage in certain seats.

It’s always hard to know at that age! We had to take our eldest out of one show in the first half once at that age for another panto, but our second child no issues at that age. We do always make sure we have plenty of food for any moments when distraction might be required! We took one of those kids footstool type things recently which we put on a seat which worked well. My wife thinks after the first 6-8 rows it’s all well raised and steep as such, so views should be good (they ended up in row M) I think this is the raised stalls but I’ve never been myself. Good luck - it does sound like a good show for kids and my kids liked it as much it not more than other pantos at more established panto theatres (Richmond and Bromley).

We had the same concerns with our nearly 3 y.o. She was definitely a bit freaked out by the panto villain at the start and spent the first half cuddled into either me or my wife. By the interval she was asking to go home

, but we had some other kids with us and didn’t want to have to split the group, so managed to convince her to stay with a little lolly-pop bribery.

By the end of the second half, she was singing and dancing with the rest - and even now, nearly a week later, she keeps on telling us all about various scenes that she remembers (she was especially taken with the bit involving the egyptian mummy) to the point of even reciting some of the lines!

As @oakr says, anything outside the Front Stalls (M onwards) is on a good slope so unless you’re really unlucky enough to get a 6 footer like me sat right in front of you, your 3 y.o should be fine. We were on row N and everyone was able to see OK.

thanks very much for sharing your experiences, @armadillo and @oakr

We just went to the penultimate performance of this show today. It was absolutely fantastic and we hope this year marks a long-term return of pantomime at Catford Broadway, since it was so easy to get to, and such a lot of fun!

I saw here that the producers have signed a multi-year deal with Lewisham / the theatre and there will be panto for the next few years at least.