Has anybody lost a wardrobe?

Somebody lost a wardrobe at the back on Sainsbury’s. If anyone recognises it, please let me know, I’d be happy to return it. Hurry before I report it to fixmystreet. 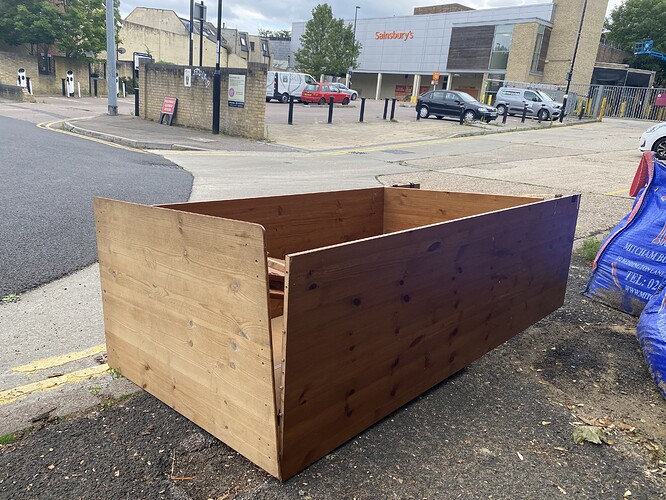 It’s easily done. Which of us - hand on heart - can say that we have never mislaid the wardrobe.

Narnia… how will they get back from there now??

Someone has now broken up the wardrobe (why?(, dumped a black bin bag full of broken tiles, stolen one of my almost empty blue building sand bags (weighed at least 50kg as I could barely drag it) and then lifted a load of sand out of the second full bag. Is it really worth it for £40 worth of sand. People suck.

It seems that people are don’t lie level fly tipping in the area more often. Embolden by years of the police and council doing nothing

While that’s certainly one factor, the restrictions on what can be put in bins or taken to Landmann Way ‘reuse & recycling centre’ also mean it can be difficult to get rid of small amounts of some waste e.g. a bag of broken tiles is probably classed as builders waste and may not be accepted at Landmann Way.

The list of materials is here and doesn’t mention tiles or ceramic (though plant pots and ornaments are accepted):

What you can bring to our reuse and recycling centre

Find out what you can and can't bring to our reuse and recycling centre on Landmann Way.

When I lived up in North London, I recall their ‘recycling centre’ took almost everything, including tiles:

I can’t say fly tipping wasn’t a problem there, but it was easier to do the right thing. Meanwhile here in Lewisham we have neither a carrot or a stick

Regardless if it collected curbside, or from a recycling centre the Councils which manages these still need to pay for their eventual disposal, or onward use and that all comes at a price. Councils individually need to determine whether additional cost justifies this.

For instance, we benefit from mixed recycling. Processing this costs the council more than if we, as residents were to sort and separate ourselves. Frankly, I don’t think that is particularly a tough task and we should be doing this. But where mixed recycling is used there is a much greater uptake of recycling. In this case I presume Lewisham would have to weight the additional cost against higher recycling rates.

Having come to FH from Southwark, I’m not the biggest fan of recycling in this borough. But I also think if we are doing home refurbishments like bathroom and kitchen refits, we should start to take more responsiblity and budget in the cost of licensed commercial waste companies.

Of course another solution would be neighbours to collaborate and share the cost of a skip or similar.

For instance, we benefit from mixed recycling. … Frankly, I don’t think that is particularly a tough task and we should be doing this.

I agree in principal, but if this means another wheelie bin or container, I think many properties would struggle to find the space.

we should start to take more responsiblity and budget in the cost of licensed commercial waste companies.

It’s things like small amounts of DIY waste that are difficult to get rid of in Lewisham - the bin bag of broken tiles being possibly such an example. Sure, if you are ripping out a bathroom or kitchen or whatever, get a skip and make plans, but I doubt that would be cost-effective for one bag of tiles or similar.

Also note that as far as I have checked (only about the first 5 or 6 websites), none of Lewisham’s licenced skip hire companies have up front pricing. The Hippobags are the exception on pricing transparency, but the smallest is £90 for a 90cm3 sack - not cheap, and overkill for a bag of tiles which could have been disposed of without charge in North London.

Of course another solution would be neighbours to collaborate and share the cost of a skip or similar.

Or we could all share a useful borough-wide recycling centre which is funded through council tax. Not that I don’t like my neighbours, but I’m not sure their DIY schedules match my own which tend to be unpredictable and drawn out affairs.

One thing I did learn is that these guys (https://brewsterswaste.co.uk) also do wheelie bin hire for smaller amounts of waste which looks useful (but still no online pricing I can see).

Anyway, none of this is an excuse for fly-tipping. I’d just like to point out that doing the right thing isn’t necessarily straight-forward or affordable in all cases. Combined with a lack of prosecutions, fly-tipping will surely continue in Lewisham until something changes.