Demented foxes in the night

For the last few months we have had a couple of young foxes occasionally snuffling around our front garden at night. We’ve probably only been aware of it because we have a bell that sounds in our bedroom if anyone goes near our cars.

But lately they been serenading us from under our bedroom window and last night they reached a crescendo.

They do an answer and call. One is a perfect imitation of It from the Addams Family - if slightly more frenetic and a hell of a lot louder. The other sounds a bit like a very loud cawing crow crossed with a furious Pekinese.

They suddenly look a lot bigger but that could be their winter coats. It’s a bit early for fox rutting isn’t it? I thought that was more January ish? I wish they’d just get on with it and go off and have a nice quiet afterglow.

We chase them off but 10 mins later they’re back. Last night was exhausting. This morning I feel like I’m tge one who’s had the night on the tiles; but they’re the ones that had the fun.

I’m going out with the Jeyes Fluid today. Any other suggestions?

do you have a hosepipe neaby? I use this, fairly effectively, for cats 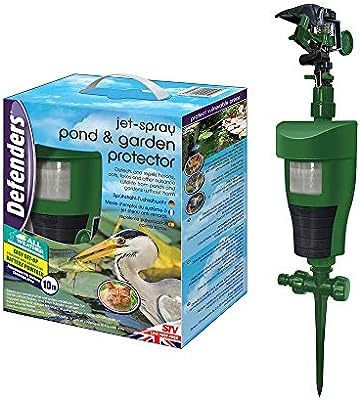 Great prices on your favourite Gardening brands, and free delivery on eligible orders.

Unfortunately they trist at the front of the house, on the driveway and by the front door so it’s not practical to rig anything like that up. I’ve often wished we could install one of those to keep cats off the border, but the shape of our front garden doesn’t allow for it We’d soak the neighbours as well as delivery people.

I wish they’d just get on with it and go off and have a nice quiet afterglow.

This really made me laugh.

Otherwise friends have had mixed success with those high-pitched noise deterrents, but that also troubles their own cat, so it’s not for everyone

They aren’t rutting, just communicating each other. The young from the past breeding season are still spending time with each other.

I love having them in my garden. We had two kits this year. They do tend to steal the dog toys from all around and bring them into our garden to play with.

Oh believe me, they’re not so cute at 1am, 2am 3am … night after night … directly under the bedroom window.

Nor when they bring all the leftovers from the local chicken shop and leave it all over the garden. And use it as a toilet. And smash all the fences to get through to all the neighbours’ gardens!

I shooed them off several times last night only for one of them to return and spray in the porch. Especially lovely as our house is on the market! I’m beginning to think they work for a rival estate agent. Why us? Why now after all these years of peace? Can we get an ASBO?

Can we get an ASBO?

So a combination of constant shooing the foxes away and then the installation of our ultrasonic whistling thingy in the porch at night seemed to work. Then I felt guilty and we removed the ultrasonic whistling thingy and one of the foxes - just the one this time - returned and ate the insulation off of our ourside tap.
So the whilstler’s back on again.

ate the insulation off of our outside tap

Wow - I’d have thought there are better pickings for foxes in London, but perhaps lockdown has hit them too!!

When I lived up on Sydenham Hill they used to do my head in.

This is what the foxes thought of our ultrasonic noise emitter… 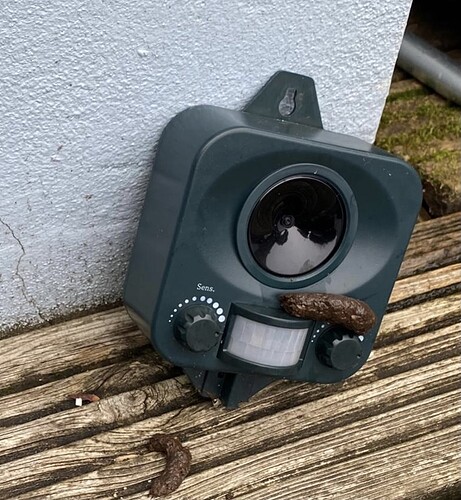 Coincidentally they did the same thing to the fox spray bottle we left outside.

Sometimes it really does feel like they are trolling us.

Their loud night antics are also keeping us up at night if it makes you feel any better.

We recently had a random flat tire on our car - totally deflated with holes in the side that I thought might have been deliberate, if not a very unfortunate brush with a sharp object by a kerb. Mr Kwikfit took a look and reckons it was a fox claw/bite! I’m still not sure I believe it, but this thread makes me think they might be sentient and wanted to express frustration with LTNs being removed.

I must admit to getting a bit excited whenever I see a fox walk down the road or across my path, they are very beautiful creatures. But by god they are troublesome and annoying sh**s, particularly in cities.

A slashed tyre by foxes is a new one!

When my husband was fixing the replacement insulation to our outside tap, a fox sauntered up and stared at him before turning and chewing at my car trim.

I do have a slow leak in a tyre, but I think that’s down to Halfords as it coincides with them replacing a tyre (probably unnecessarily) as part of a service. I drove straight off from Halfords 150 miles down the motorway and arrived to find my tyre was flat as a pancake. It’s had a slow leak ever since.

Maybe the fox is sponsored by Halfords?

a fox sauntered up and stared at him before turning and chewing at my car trim.

The evidence is mounting!

Foxes are nowhere near as bold in the countryside as they are in London. If you actually want to see them in all their glory you can ‘squeak’ them in by rubbing a piece of cork on some glass (windscreens are good). It’s how me and my dad call them in when we go foxing (which I haven’t done in some time).

I have seen 1 fox since moving to Norfolk. We had a den at the bottom of our garden in FH.

They don’t have any natural or determined predators within the M25. Rather, the only real threat they face on the whole in this country is armed humans. On the South Downs in W. Sussex the most you’d realistically get in the bag with a thermal optic mounted on your rifle is about eight foxes. Given permission I could probably shoot upwards of thirty in Crystal Palace park in one night alone… Which is clearly impractical given the proximity of nearby dwellings and lack of backstops.

My son has recently had to replace his car windscreen, as there was a split at the bottom which grew in the time he had to wait to get it replaced (needed a specialist appointment).
He strongly suspects it was broken by foxes, as their paw prints are all over the car.

They’ve got the right colour uniform, you might be on to something

Not guilty, m’lud. With the exception of an air rifle I don’t own any guns. The guns I help my dad use on the foxes are all held on his license.