In further recognition of Perry Village being the capital and cultural heart of Perry Vale ward, this year it looks to be getting it’s own Christmas tree: 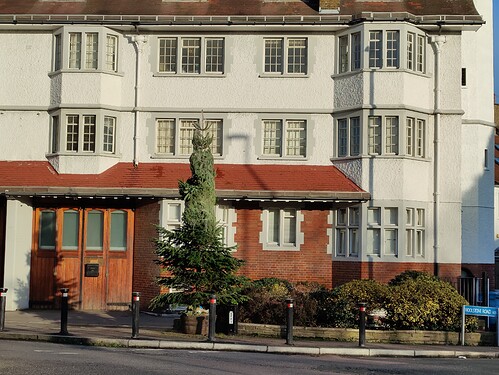 It might not have owls or be decorated yet, but I dare say it might be taller than the little one up in Forest Hill

@ThorNogson - any word from the village elders on this one?

Approving glances from the small gathering clutching their cappacinos and bacon rolls outside the bistro. Animated discussion centres on whether the top should be traditional or perhaps be left free for exclusive use of the falcons.

I haven’t been to The Village for a couple of days. Has the tree been decorated yet? Or does it still look like a bank-robber

It wasn’t decorated yet this morning

By what date might The Villagers initiate guerrilla decorating? Sat 19th seems too late.

The lights are up, beautifully done and tastefully restrained in true Village style Can’t wait for darkness to fall. About 4.30 isn’t it? 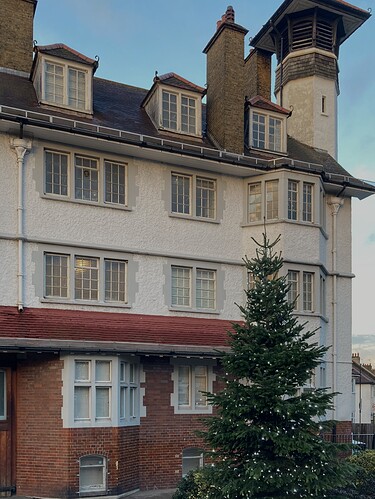 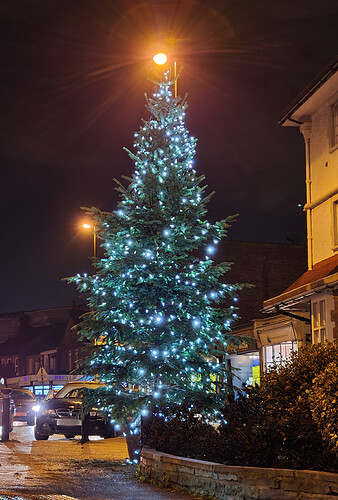 And, not quite three wise owls, but I found our three Ward Councillors under it too! 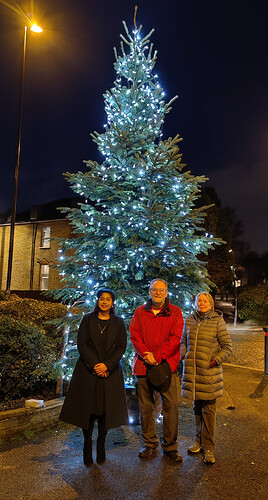 From left to right there’s Cllr Sakina Sheikh, Cllr John Paschoud & Cllr Susan Wise. (Apologies for making them stand a bit closer together than 2m, but they work together so are in a work bubble and had hand sanitiser and such.)

Anyway, the ward councillors said that they had been working hard to get the tree in this year, just managing to get the power point added, and it should have been lit earlier in the week except a positive test result of a Skanska worker caused all sorts of problem getting it finished off.

It looks great, and is a nice location. Next year Susan said they plan to trying planting a Christmas tree at nearly the same location so we can have a tree every year (if the tree survives, which doesn’t always happen, but they will keep trying!).

Looks great! I’m “going down the bottom” to look at it now.

Would be lovely to have a real tree (I noticed there’s a sycamore growing in the Allenby Road flower bed - definitely don’t want that there) but can we check the sightlines first? Some of the shrubs in the Fire Station bed are already a bit problematic in blocking the view of traffic coming down Perry Vale for pedestrians waiting to cross Woolstone Road. I’ve never liked to mention it before in case Lewisham cut down all the shrubs.

In further recognition of Perry Village being the place to be seen, I met Ellie Reeves, Labour MP for Lewisham West & Penge, by our lovely Christmas tree. 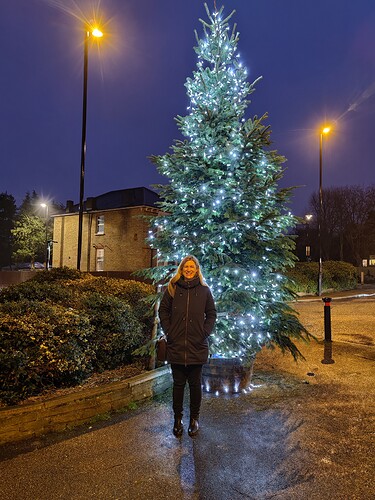 It was raining, but we had a quick socially distanced chat. Her constituency office is just up the road and as a child Ellie attended Adamsrill Primary School just over Perry Rise. I reiterated our efforts to recognise the name Perry Village, though stopped short of asking her if she could raise the matter as I think she’s got much more important things to be doing!

Oh no! Looks like it’s been felled by storm Bella (it’s laying on the bushes!): 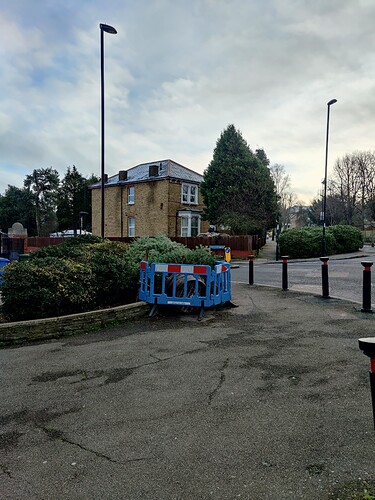 I’ve reported it, so hopefully it can be fixed for a few days before being sent for composting.

If we get a real real Christmas tree planted for 2021 I guess this won’t be a problem then.

Village elders carried out a safety appraisal this morning. It’s all electrically safe and fenced off by the council. Probably easily rightable with a rope but you can’t know how stable the tallest Xmas tree in the area and its barrel base will be until you try. So left as it is.

Good news - the tallest tree in the village stands proud once more!

Thank you to whoever restored it.