This happened outside our house in Winsford Road with violence threatened yesterday evening at 20.15. The couple who own that car were standing there and you can see were threatened with a weapon. This is not just theft but violent crime. The police were called immediately and did not turn up.

Beware. Criminals are having a free-for-all all around with ZERO deterrent.

This is really shocking, especially as the police are not responding.
You could pass this onto the South London Press, and see if they could follow it up. This is the crime reporter lottie@slpmedia.co.uk

Omg this was horrible to watch. I’m so sorry you/your neighbour experienced that behaviour. I would have confronted the ****s too!

I hope the police are investigating this seriously now!

No they are not investigating it seriously - the police were chased for an hour as to their attendance. I have great respect for the individual police officers who do a very difficult job. But as a public service they are utterly useless now.

If we had confronted similarly armed and fought back no doubt the police would have been there like a shot to arrest us for any injury caused. Like I say, it is a criminals paradise now.

Sadly this is not new. I was attacked in Waldenshaw Road by two people who were trying to steal a motorbike. My wife was screaming and calling the police. After fighting with the two for about 10 minutes they left on their stolen scooter. What upset me was the owners of the motorcycles came out after the event to say how brave I was. They had watched the whole thing. The police turned up 35 minutes later, did a bit of a shrug and left. No other neighbour helped. You are very much on your own these days.

You are very much on your own these days.

That’s a shame that nobody helped. As soon as more people came to help in this video the thieves backed off. Safety in numbers.

I personally lost faith in society a few years ago when a train packed full of commuters watched on whilst a mentally ill stranger came up and aggressively threatened me. I vowed I would never watch on if I saw the same thing happen to somebody else, but clearly not everyone feels the same.

The sad thing is I understand why. I was stupid enough to take on two guys, one armed with a crow bar, the other with a heavy chain. It wont stop me doing it again.

As you say, you dont need to do anything, just being their in numbers does make a difference.

Have we really got to the stage where people are threatened by thugs with weapons and the police don’t come ?

I suspect there are simply not the resources to deal with this adequately, and we are going to have to wait for a special operation of sorts like the one that targeted those using scooters to rob people. You’d think there would be enough reported issue with this for one to start, but I guess we don’t see the other pressures.

There people certainly appear to act with inpunity, stealing at all times of the day in broad daylight. I’m not sure what the answer is at present if the police can’t deal with it, which concerns me as at some point something none of us want will happen.

You make a good point as always, but this is not just stealing by force (low end robbery), but this is stealing with the threat of violence and with an actual weapon which is an offence of a different magnitude. If that does not even warrant turning up anymore, then we really have got problems.

The sad thing is that if something similar happened to me and I shot them with my air rifle I’d be sent to prison and they’d be booked in for therapy. I’m not making out that I’m some kind of hard case but I think you get the picture.

9 posts were split to a new topic: Posts moved from Catalytic converter thefts

Although there haven’t been a huge number of reports of catalytic converter thefts on this forum the number of reports on other forums covering a wider area of SE London indicates that this is rife at the moment. Even though the criminals doing it are often captured on camera or video it doesn’t seem to result in them being identified though

Our friends in Blacklands Road had the same happen on their driveway from their old MX5. It’s happening everywhere.

Likewise my next door neighbour

I received this in a group email this morning. Nothing new and I’d no practical help, but thought I’d share anyway.

You may be aware that there has been an increase in theft of catalytic converters from cars on the Forest Hill Ward.
This crime is attractive for criminals as the exhaust components are highly sought-after due to the precious metals inside: palladium, platinum and rhodium. Catalytic converters (commonly known as ‘cats’) can contain up to seven grams of these metals.

Palladium, platinum, and rhodium found in the converters are worth a fortune to thieves. Currently, palladium is even more valuable than gold, rhodium is worth almost two thirds of the value of gold, and platinum is around half the value of gold.

As your local Safer Neighbourhood Team, we wish you provide you with some knowledge on this topic, including how to reduce the risk of catalytic converter theft from your car.

Why are they a target for theft?
The chemical reaction that takes place within the converter requires precious metals to act as the actual catalyst. These include palladium, platinum and rhodium. Market values for these rare materials have increased substantially in the past 18 months. Palladium can be sold for £1,500 per ounce, with rhodium worth up to £6,700 per ounce. Both figures are higher than the price of gold.

How do thieves steal catalytic converters?
As part of the exhaust system, catalytic converters are left exposed beneath most cars. This means thieves can simply slide under the car to remove them. SUVs are particularly at risk, as their raised ride height makes access beneath the car easier. Some are bolted onto the exhaust, with other types being welded into place. The latter can be removed by cutting through the pipework to free the cat.

Most catalytic converters are unmarked, meaning they cannot be easily traced to an individual vehicle. Once taken, they can be sold to unlicensed scrap metal dealers.

Why are hybrid cars being targeted?
Hybrid vehicles, such as the Toyota Prius, account for a large proportion of the catalytic converters being stolen. Admiral data shows that the Prius, Honda Jazz, Toyota Auris and Lexus RX are the cars most susceptible to theft. Thieves target these vehicles as the catalytic converters are said to be less corroded. The hybrid drivetrain results in lower overall exhaust emissions, leaving the precious metals in better condition. In turn, this makes them more valuable to sell on.

What can I do to protect my catalytic converter?
Not all cars are at such risk, with some models having the catalytic converter mounted within the engine bay. This makes it much harder to steal. Drivers should check with their local dealership if they are unsure.

The following advice will help local residents to reduce the risk of your catalytic converter being stolen:
• Parking your car in a locked garage overnight
• Trying to park in a location that is well-lit and overlooked
• Avoid mounting your car on the kerb as it gives thieves easier access
• Installing CCTV to cover where your car is parked
• Marking your catalytic converter with a forensic marker (see below)*, which can make it harder to sell on
• Speak to a car dealer about a tilt sensor that activates an alarm if a thief try’s to jack up your vehicle

If you require any further advice regarding this issue then please feel free to get in touch with us.

If you require any further advice regarding this issue then please feel free to get in touch with us.

How about something on the investigation and detection of these crimes?

• Installing CCTV to cover where your car is parked

As a visible deterrent, or to provide evidence for the police? It appears that in this case, film was available, but still no investigation.

The precious metals are a nice story and could be true.
I would wager most of the profits come from selling the stolen converters to (disreputable) garages who then sell it back to people who have had it stolen.

In reply to the original post… absolute f*ckers! I am so sorry this happened to your neighbours and I hope they are not still shaken from this (although likely are). Thank you for sharing. So terrible that we do not have a police force that is fit for purpose. My brother is a police officer (not in the Met), I know in his force officers are leaving in higher numbers than they can recruit them, things aren’t going to get better any time soon.

Happened to my neighbours on Siddons Road also. We heard a noise and looked out the window in time to see them run off up the road.

Not quite our postcode, but it looks like some positive policing around this problem, even if it was happened upon by chance:

Police came close to catching a group suspected of stealing catalytic converters yesterday in Eltham after a wave of the thefts has swept Greenwich and Bexley.

Coldharbour and Eltham North Police teams were leading Covid enforcement patrols on February 15 when they spotted three people acting suspiciously inside a vehicle.

Inside the vehicle officers found tools and equipment linked to catalytic converter thefts.

Coldharbour Police say these have been seized and await examination from crime officers, and the vehicle has also been seized.

The team described the trio as a ‘catalytic converter team’ successfully disrupted, and added there was an investigation ongoing to identify those responsible.

There have been a growing wave of catalytic converter thefts across south east London in the past year, with thieves regularly targeting vehicles outside people’s homes or in car packs.

If you see anything suspicious, please ring 101, 999 or DM @MPSAbbeyWood or @MPSPlumstead.

it looks like some positive policing around this problem, even if it was happened upon by chance:

It’s probably a small group of people responsible for the “wave of thefts”. Glad the officers doing Covid patrols were using the opportunity to gather intelligence on other matters.

I think I’ve been targetted. My ancient Honda Civic was making a lot of noise when I started it up to head home. I usually park at the Honor Oak end of Grierson Road but there were no spaces available. I parked further along out of sight of the main road. Insurance right off for me given the age of the car. That was my late father’s car and it breaks my heart.

Let’s hope this positive development also affected those who have been carrying out this crime in our neighbourhood: 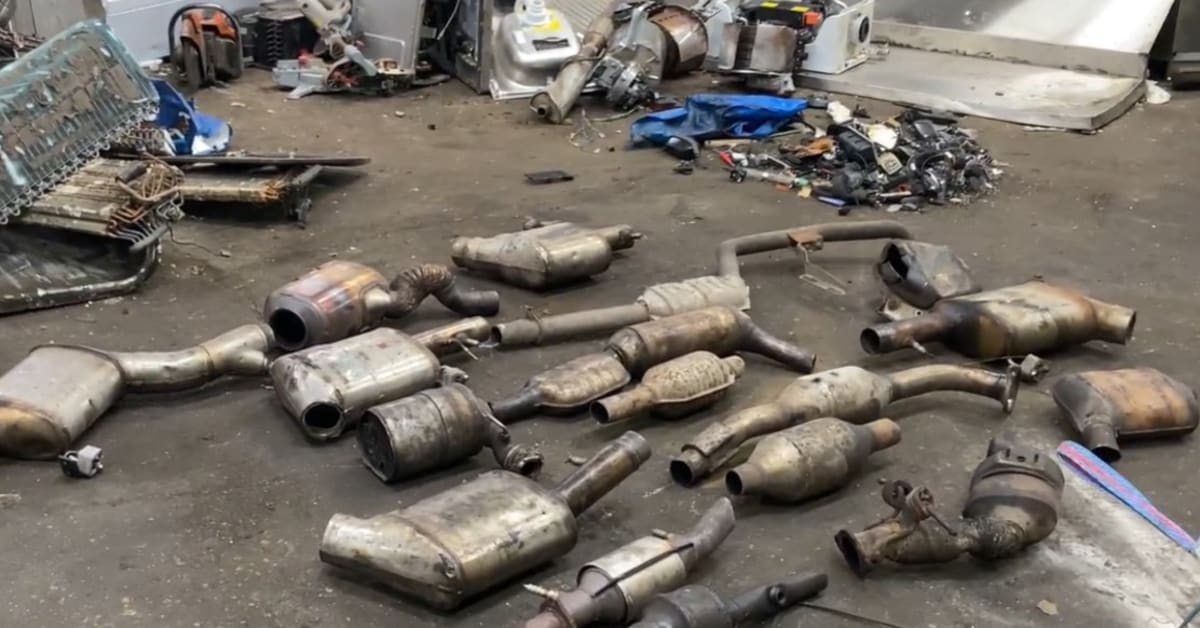 Met officers have executed a number of warrants as part of an operation into the organised criminal theft of catalytic converters.

Good news - similar to the moped crimes of a few years ago, so many of these crimes seem to be committed by a compartively small number of people.