I can’t have been the only one to have witnessed some truly hair-raising driving about an hour ago with a car being chased up and down Whatman Rd & others - police helicopter right overhead banking at a terrifying angle & the actual smell of burning rubber permeating the air…! Does anyone have any idea what on earth was going on, or if they eventually caught them? It’s not the first unusual event to happen on Whatman Rd, I swear there’s something in the air around here…

Saw on another ap it was a police chase of stolen car / robberies. They caught him around Mayow

Looking at the footage on NextDoor, how can someone that old have the energy to commit multiple burglaries and evade police in a stolen car? Looked like he was in his late 70s.

My husband saw that chase go past him twice as he was walking home. He says the driver looked about 35 to 40 years old. Also a very low flying helicopter. Glad it was a successful outcome.

Drugs can have a terrible effect on people; but that guy looked a lot older than 35 - 40 years old.

There were actually two different police helicopters over Mayow Park at one point.

I saw some of it and the car being chased up Whatman and Hershell Roads, turning in at no notice, tyres screeching still with plenty of young kids out and about - thankful seemingly he didn’t hit anyone or crash into someone or something.

After circling around HOP a second helicopter appeared and it seemed like the chase moved to somewhere near Bell Green.

Looks like the person was driving the Van stolen from Dartmouth Road as detailed in the other post on here:

[image] [image] [image] UPDATE: we have pictures of him from CCTV! Does anybody know this thief?! My partner’s grey VW Caddy van was stolen from outside the flat in the early hours this morning. They’ve been trying to use his bank cards in shops on Dartmouth Road this morning, and later in Brockley. The van was full of camping gear which they may dump - a blue IKEA bag full of beige and blue bedding, calling chairs, a white drive-away awning, kitchen unit, gas burner and bottle, walking bo…

Yes, it was the grand finale of our stolen van saga! We think the van is indeed written off, though to be honest I don’t ever want to be inside it again. The chap was a drug user, crack pipe inside, overpowering smell in the vents, burns in the seats, and a weird red leather bed shonkily installed in the back. The police found him after we advised that he was driving around the area daily using fake number plates. The followed him, he tried to speed off, mounted the kerb, hit a post box, rammed the police car, and seeing as that was now wrecked they used it to pin him in. He jumped out and tried to run but they got him - another man got away.

I have to say that local people and businesses were instrumental in us being able to direct the police to him - I’m glad they finally stepped up but it was a very slow response given we knew he was local, and driving a 2 tonne van totally off his head. It’s very lucky that no one was hurt. Sad and stressful for us throughout, of course, and I don’t suppose we’ll ever see any of our stolen belongings again, but I’m glad he’s now in custody, and we are trying to move on. 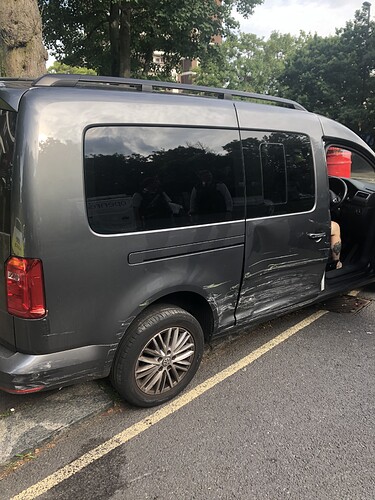 Sounds horrible for you both, and not a good outcome really for you either it seems.

That said, well done for being so on the front foot and getting him (and hopefully his accomplice) off the road to stop them doing further damage to others. I’m glad you got help from local people, that’s always good to hear.

Good luck with everything.

I’m gutted for you - but this may not be a terrible as it feels right now.

The damage in that photo is superficial and could probably be made-good quite easily - albeit that I appreciate it will never be quite the same for you.

Please feel free to PM me if you want and I will talk you through the possibilities.

Well done @Lucie_Mussett for your persistence. I hope tge damage is just what we can see the the photo and nothing structural, so that you can get in repaired. Maybe without going via your insurance. Insurers have to have someone “at fault” they can claim from. I can well understand you not wanting your vehicle back, but maybe you could get it repaired (and thoroughly cleaned!) and sell it?

Oh dear! Well at least it seems like no one was injured in the chase, and well done for your persistence too.

Sorry to hear this Lucie. I had my car stolen at the tail end of last year and I must say that when I got it back, fixed from the garage provided by the insurer, I wouldn’t have known it had been taken - or the state I saw it in when found by the police.

Most of the contents had been thrown out by the thieves (15 year old kids) though I did get the car returned with a vape and a ‘herbal’ grinder!

Insurers have to have someone “at fault” they can claim from.

Insurers have a contract with you and will pay a claim regardless of their ability to reclaim their loss from any at fault party.

comprehensive insurance normally covers repairs to your vehicle even if you caused it yourself.
Theft insurance will also cover loss or damage to the vehicle as a result of theft or attempted theft. Either would normally cover the market value of the vehicle if repair cost would exceed that.

I’d say it was pure luck that no-one was injured as that lunatic drove down the pavement on Bampton Road to escape police scaring my wife and children who were clearly driving too slowly on the road for him. I have heard other reports that he did a similar thing in Mayow Road forcing a mother snatch her baby out of the pram.

Unfortunately @ThorNogson if insurers don’t have someone they can claim back from, whilst they can might meet your claim they also count it as a claim on your insurance rather than the other driver’s, as there’s no one they can pass the cost on to. This means your insurance costs can rocket. I speak from personal experience as both M&S and the Coop Insurance have done this to me, despite having the maximum of nine years protected no claims discount. One time was when catalytic converter thieves made a mess of my car and another time when some maniac drove into me when trying to overtake me on Sydenham Road.

Ok, perhaps I misunderstood. I thought you had implied that generally insurers would not meet a repair bill unless they could recover their outlay elsewhere- which would rather make insurance pointless.

Anyway this whole episode has been quite awful enough and I hope the victim is well treated by their insurers.

At least you have closure Lucie. That said it is still a horrible thing to happen to you & your husband. I hope the insurance company are not giving you hassle & you get what you are owed.

One tip Lucie, if your van is a write-off your insurer will probably offer you the market value that you could sell it for. Do not accept that. The Financial Ombudsman has stated, way back in 2010, that they consider the market value to be the amount you would have to pay to buy a comparable vehicle.