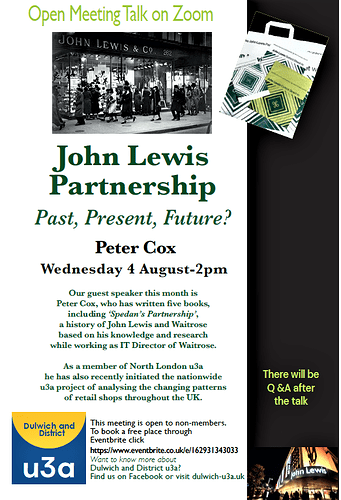 I filmed on the Longstock Estate many years ago The tiny village shop was a branch of John Lewis! I can’t remember the name of the Estste manager - Maurice ??? - but he had such hilarious stories of eccentric but visionary John Spedan Lewis. I look forward to hearing some more.

On a more serious note the Partnersip was a great model. More’s the pity that more businesses didn’t adopt it.

Spedan Lewis was a visionary; he believed in lifelong learning, sabbaticals, wellness with clubs/societies and countryside hotels open to all workers and put those things into place nearly a century ago. He once said that it was entirely wrong that we had millionaires while we still had slums and hoped that the Partnership would provide a different model of capitalism. I suspect he’d be rolling in his grave to know that we now have multi-billionaires while there’s still poverty.

I suspect the talk will be entertaining; there’s all sorts of entertaining stories in the Partnership’s archives from Spedan wheeling a shopping trolley from Oxford Street full of cash when buying Peter Jones to him having gibbons on an island at Longstock.

I’ll be off on a John Lewis yacht sailing around the Dorset coast keeping Spedan’s vision alive.