Today the timetable proposals for 2018 have been announced by Southern as part of a consultation. This describes how our train services will change after all the works at London Bridge and on the Thameslink route are finished.

The detailed information can be found on the Southern website under Your Journey and then Timetable Consultation.

There is a lot of information to go through, but whilst it looks like there are a lot of improvements for many other routes, it looks like train services from our SE23 stations will get worse in many ways!
The headlines I could identify so far are:

This won’t only make many journeys more inconvenient, it is also against other facts outlined in the documentation which show that our route is one of the ones with the most people to travel to Thameslink stations via London Bridge.

Given that this is a consultation which will last for 12 weeks, there is hopefully an opportunity to mitigate some of the issues above, but I suspect it will need a lot of us to voice their concerns in order to make any impact.

Anybody else got any views?

Seems like they’re favouring the longer commutes to make the journey times sound good for sure…
Looks bad for us… especially for commuters going into LBG but I also often go to Brighton for work and the non direct to ECR and Norwood Junction thing will make it a nightmare. On the way back they often made the slow trains fast anyway from ECR to FOH when delayed, forcing change at Norwood J… good luck with that with the new proposals.
Here’s the link for response to consultation:

This makes my decision to work from home look like quite a good idea.

Here is a link to the proposals:
http://www.southernrailway.com/your-journey/timetable-consultation

I think that @Forethugel summarises the changes nicely. Will miss the East Croydon direct connection but they seem to have been scaling that back of late anyway. The most puzzling thing is the London Bridge service cuts. It seems to be at odds with this paragraph from page 11 of the consultation document:

Analysis has also revealed that passengers travelling from stations between Norwood
Junction and New Cross Gate (shown as the Sydenham route on the graph), in many cases
travel beyond London Bridge to stations such as London Charing Cross, London Blackfriars,
City Thameslink, Farringdon, London St Pancras International and beyond. Whilst this route
ranked third in terms of passengers travelling to Thameslink stations London Overground are
expected to operate additional services to meet this demand. Introducing Thameslink trains
on this route is not appropriate due to the direct interaction with other high frequency trains on
the East London Line and a lack of suitable turnaround facilities. Equally there is insufficient
track capacity between London Bridge and Charing Cross due to the intensity of
Southeastern Kent services so these options are not proposed in this consultation as there is
no scope to introduce a direct service. Alternative high frequency Thameslink and
Southeastern trains will be available at London Bridge where passengers will be able to easily
interchange, for onward destinations, between trains using step-free access.

There will be some destinations that can be served from the Overground but this will put yet more pressure on Canada Water. I understand why we are not getting Thameslink services stopping and can even appreciate why no service direct to Charing Cross but a reduction to London Bridge seems very odd to me - from 5 down to 4 per hour in the morning peak.

The consultation states that Forest Hill only has 4tph in High Peak. This is true but only since Southern temporarily removed services from the timetable following the mess in services in 2014 and 2015. It now looks like we will not have services restored to the level they were at in 2010 at exactly the time that Thameslink services run through London Bridge, making it a more important interchange.

Surprised it hasn’t been mentioned yet, however the proposal is for Victoria services to operate on Sundays at the same frequency as Mon/Sat.

The diversion to West Croydon of our Caterham/Tattenham Corner trains is a wasteful duplication of the London Overground service.

@Michael Yes, the current London Bridge to West Croydon service via Tulse Hill and Selhurst would go to East Croydon. We should be pressing to keep that service at West Croydon and for our services to terminate at ECR instead to maintain the current connections.

The diversion to West Croydon of our Caterham/Tattenham Corner trains is a wasteful duplication of the London Overground service.

@Michael Yes, the current London Bridge to West Croydon service via Tulse Hill and Selhurst would go to East Croydon. We should be pressing to keep that service at West Croydon and for our services to terminate at ECR instead to maintain the current connections.

Agreed with all that but with the slight difference that we should press for a retention of an ECR service. To say that it should terminate there is probably asking for something unrealistic.

@Brett Not exactly unrealistic when you consider Milton Keynes trains terminate there (previously South Croydon), however if there isn’t capacity to terminate them further south (Coulsdon Town is a possibility), then something has to give and it may be fast services for Caterham/Tattenham Corner passengers.

There are plans to resignal and retrack the section between Selhurst/Norwood Junction and East Croydon in the early 2020s, which may add capacity through East Croydon and ironically add more London Overground services to West Croydon, which they can’t do with the existing infrastructure.

All true but Southern (GTR), incredibly, seem to be working against those plans: 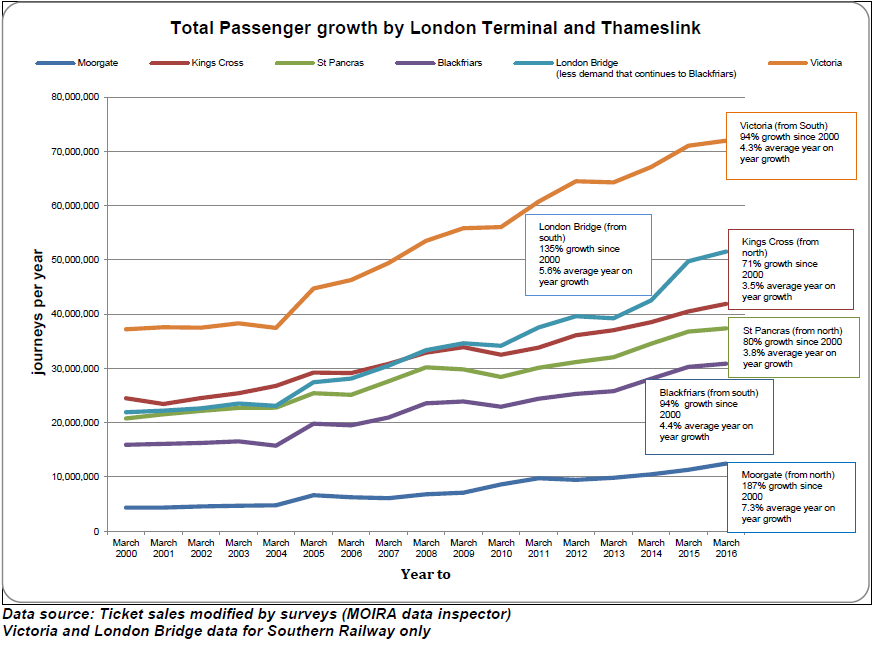 Govia go via Greenwich: GTR and the Thameslink Timetable

It has been an open secret that the planned 2018 Thameslink timetable was unlikely to work. Wholesale changes, however, were something no one was expecting.

It is interesting to note that the revenue from GTR goes to the DfT and GTR get a management fee. It does make me wonder whether the route changes are intended to align the franchise with TfL’s future takeover vision: 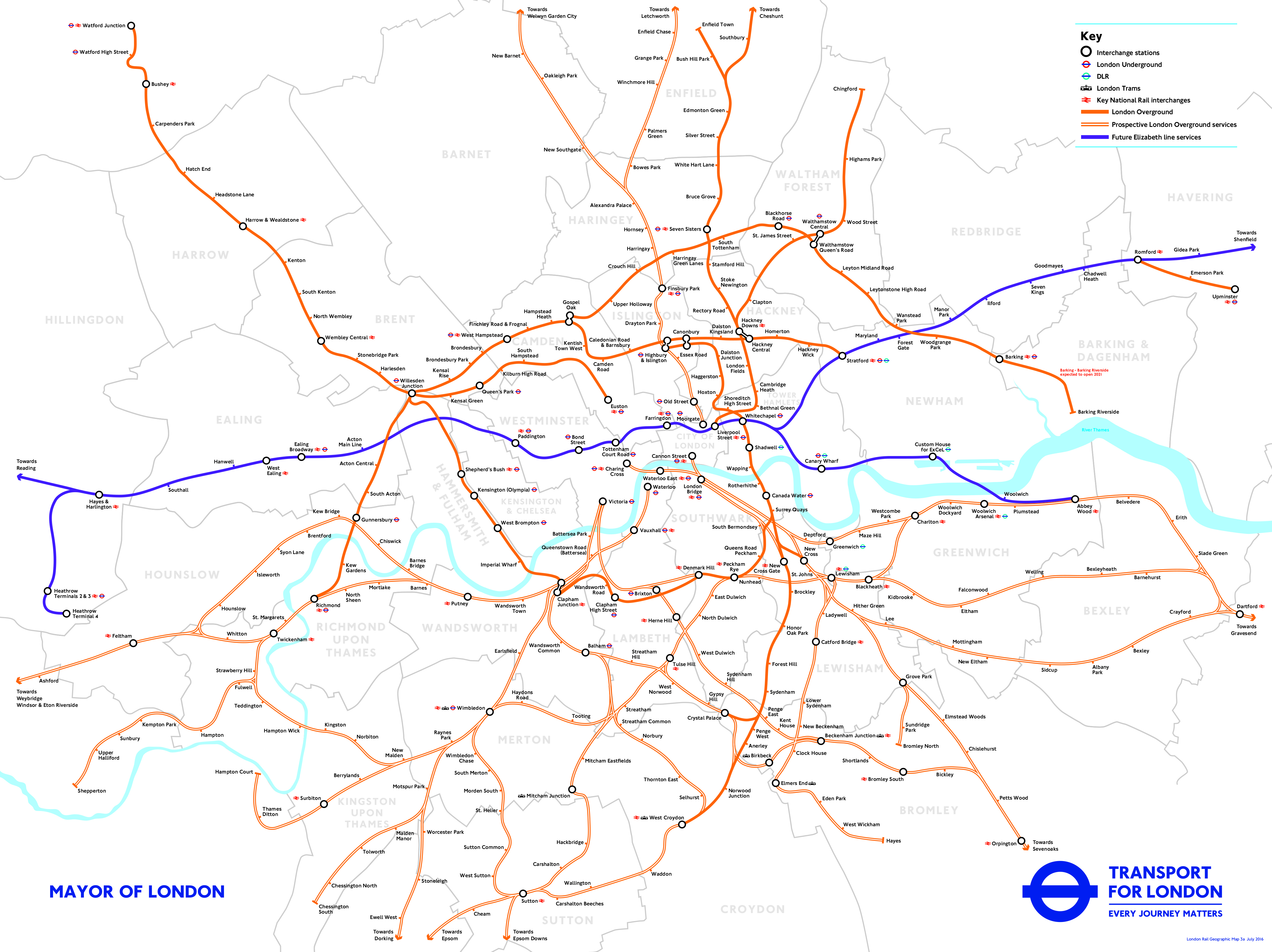 [quote]I am writing to tell you that Nick Brown been appointed as the new Chief Operating Officer at Govia Thameslink Railway. Nick will join us in November to replace Dyan Crowther who is leaving after two years to become the new CEO of High Speed 1. Dyan will be leaving with my warmest congratulations and grateful thanks for her significant contribution to GTR.

Nick is a highly experienced transport professional with more than 35 years’ experience in the industry and until recently was Managing Director at London Underground and Rail for Transport for London. He is ideally placed to help us achieve our business goals and deliver a better railway and excellent service for our customers going forward. [/quote]

I have just moved back to the UK, having left in 2008 and I’m shocked how much time it takes me to get from honor oak park to angel, 1hr!

Yes I can now get to Canada water and other eastern destinations but most people want to get to the centre of town, not whitechapel!!

You have been away a while. Whitechapel IS the centre of town now.

I have just filled out the consultation. It’s not a particularly easy to use survey (it would have been better if it only asked questions relevant to your location once you have filled that in) and there is no obvious space to complain about the relative lack of consideration given to commuters with shorter journeys such as those from Forest Hill to London Bridge. I guess that isn’t the purpose of the consultation.

However, I thought it might be helpful to copy the link again and highlight that if you want to complain about the changes to the London Bridge to Caterham via East Croydon services then all that is required is 2 mins to enter your information at the top, to answer questions 59&60 then submit all other questions blank.

I read on the other local discussion board that Southern are proposing to cut the number of London Bridge services from FH and HOP down to 4tph from 6tph. I couldn’t get the link to work, has anyone heard any more?

Hi @Irmani_Smallwood, I have merged your question in the existing topic for this.

I have to say, this has confirmed my decision to work from home is a good one. Southern can stick their train service where their conductors wont find it.

Forest Hill Society have compiled a guide to help you complete the nine key questions in the consultation document: