which coffee places would you consider to be third wave? I only think St Davids qualifies, but have not been to all of them. The Mrs told me I should try the Archie Parker.

I think @StDavid is the only place in town that acheives a velvety texture in their flat whites. Mamma Dough was also pretty good, from memory.

Had to look up the new fangled term but this really just relates to my own coffee aspiration which is to recreate Italian coffee (though perhaps strictly speaking without the milk) - by this I mean good coffee as found in Italy.

So who manages that? Well, from my own tests around Honor Oak: Le Querce, Cafe G, Arlo and Moe, Norris and Knight.

It is a bit harsh to slag off Provender coffee on that basis IMO, especially as it is something that is a lot better than before and better than many other places which are still of a good standard. Agreed with the other comments though.

Recently had a latte at Aga’s Little Deli and it was the finest I’d had in Forest Hill.

If we still had a Macy’s dees on the high street, cofee wouldn’t be a problem

I’m sure that any average bar in Italy or Spain - or anywhere on the Continent for that matter - takes great pride in the fact that they serve coffee in a “third-wave” style…NOT.

I just want to be able to order and enjoy a decent cup of coffee - of whatever stripe - at a decent price. I don’t care if it’s third wave, Short Wave or permanent wave.

What are some other ones?

I’m sure that any average bar in Italy or Spain - or anywhere on the Continent for that matter - takes great pride in the fact that they serve coffee in a “third-wave” style…NOT.

Correct, if you want your coffee too taste like average Italian / Spanish coffee then you have been well catered to since Starbucks hit these shores.

I just want to be able to order and enjoy a decent cup of coffee - of whatever stripe - at a decent price.

Fair enough, where do you recommend then?

I’m afraid that if you believe that Starbucks is equivalent to even the most humble of Continental cafes then we obviously have very different tastes.

Le Querce (as said earlier) do a very decent cup, and the odd time that I’ve dropped into Arlo & Moe’s I’ve not been disappointed.

I judge my lattes on whether I need to add sweetener or not, I like a sweeter coffee. St. Davids is good, Archie Parkers is very good and only beaten by Dose in Farringdon and Host Cafe in the Church off Bow Lane. Their lattes are sublime.

Best Coffee in SE23? The cup I make on a Monday morning at home!
I don’t drink coffee out much these days - I find caffeine has more of an effect on me than it used to so I only ever drink coffee in the morning. I have a Gaggia Titanium bean to cup machine and it makes a decent brew - in fact it has made over 9000 brews so far. It is getting a little wonky these days so looking to replace it at some point but not sure what with…

We have a deLonghi Eletta bean-to-cup that automatically froths and dispenses milk. Not as adjustable as I would like but still makes excellent coffee. My problem is that it should really go back to deLonghi for regular servicing but I can’t bear to let it go!

There was a review of bean-to-cup machines recently that highly rated the Sage machine. You can adjust all the settings on that so it’s more like a bean grinder and traditional machine combined that a fully automated bean-to-cup.

I think the novelty of coffee in Europe while on holiday or away with work adds a lot to the experience. I also don’t think that you can fairly separate the coffee from the total experience.

I’d rather have an OK espresso after cycling up a mountain in the Alps, or a bad expresso in Vienna than an amazing coffee in St David’s.

Best Coffee in SE23? The cup I make on a Monday morning at home!

wonders if Nick is between me and FOH

On the Hoof at HOP station does the best in Honor Oak for my money.

A tip for anyone who likes frothy coffee, cocoa or drinking chocolate etc.
Throw away all those expensive coffee machines and use this.
An empty 6 pint plastic milk container from Sainsbury’s.
Add milky coffee or cocoa into the empty container and shake until your heart’s content.
Empty liquid into mug.
You will have the throthiest hot milkiest drink all the way to the very last sip.
It doesn’t go flat.

p.s must be the 6 pint container, as it allows more room and air once shaken. The others are too small and the liquid explodes everywhere. Believe me I know.

So I don’t drink caffeine but love coffee. I love St David’s BUT they won’t do decaffeinated coffee because they say they could only do that if they spent several thousand pounds on another coffee grinder which they aren’t prepared to do. This makes me sigh a lot.

So I have to go elsewhere (although occasionally their bacon sandwiches get the better of me).

My other local bugbear is when coffee shops/stalls run out of decaffeinated coffee when they would NEVER run out of normal coffee. This makes me rant quite regularly so sorry if you have to be in the queue behind me when that happens.

Where do you think does the best decaf coffee in SE23? Ignoring the fact that for many of you this won’t actually count as coffee at all…

Aga’s is very good. The Station is good. But where am I missing?

My favourite Nespresso is the decaff lungo, I go for the taste, not the caffeine as it has little or no effect on me anyway. Archie Parker usually do decaf…

Not really. I was wondering if you would say ‘craft beer’ was also another horrible, manufactured, hipster conceit.

Arlo and Moe is great… their roaster could definitely be described at 3rd wave though. I’ve never seen it used as a marketing term, but do think it captures something real.

Not really. I was wondering if you would say ‘craft beer’ was also another horrible, manufactured, hipster conceit.

Great question. My mind is open on this one. While I enjoy many ‘craft beers’ am not convinced that they all deserve the price tag, so there could be some similarities here.

Tbh personally I don’t think Starbucks is that different to Illy.

My own opinion of Starbucks is pretty low. I think that Illy is a world away from this but that is just the coffee. How it is served is also crucial and in that sense ‘third wave’ appears pretty similar to the ‘Italian way’ to me. We use Illy at home and get a great result - in a different league to Starbucks.

My own opinion of Starbucks is pretty low.

My favourite thing about Starbucks is how reliable it is. When I need a coffee I can go there for a (freshly poured over) filter coffee or an americano and it’s guaranteed to be OK. I would prefer to live in a world where I could find better than OK.

For me, the coffee in both Crofton Park and Brockley is far better than the rather average offerings available in HOP. The Deli is distinctly average and does nothing to compel me to return, Two Spoons coffee is good for me but far too strong for my wife, the station cafe is okay but certainly not great.

I love the coffee at Fred’s, Arlo & Mo, Benedicts, the Brockley Mess and the Brockley Deli further down near the two roundabouts. These are more pleasant places to go and spend some time in compared to the local competition in HOP, which often cannot be bothered to put a name above the door (what is that all about, both Mamma Dough and now Two Spoons - makes a place feel more like a pop-up rather than an established business)…

which often cannot be bothered to put a name above the door (what is that all about, both Mamma Dough and now Two Spoons - makes a place feel more like a pop-up rather than an established business)

Two Spoons is a new rebrand so am happy to cut them some slack on this. I agree re Mamma Dough. The Brixton branch has a window stencil in the window. This would be enough in my view for the ‘flagship’ branch too but it has been like this for some years now. I know of an instance where someone walked past it and picked up a pizza from the takeaway instead because they didn’t know what it was.

Best Coffee in SE23 is the morning crew at Forest Hill station on the platform and outside. Avoid the older gentleman who does the afternoon shift. (and £1.80 for a small is insane value)

Another one is Horniman Museum, outside the museum next to the cafe seating there’s a little hut that just sells coffee, ice cream and snacks. There’s a guy in there with longish hair who is there on the weekends who does a cracking coffee as well.

Everywhere else I just find bang average. But adequate enough.

I’ve had hit and miss. It seems to depend on how busy they are. It’s difficult to craft find coffees when four people are waiting for the 0845 leaving in three minutes. Other times I’ve had excellent fare.

To add, Norris & Knight on Forest Hill Road also do a good coffee. Good lunch and amazing garden with chickens to boot.

Fig and Pistachio is excellent, as well as having terrific pastries and quiche.

Deserving of a special mention - the young chap at Honor Oak Park “On the Hoof” (in the station). He always remembers my order, is exceptionally positive and friendly, and the hazelnut* ice lattes there are great! Brightens every morning.

I agree! I was just there an hour ago. Really nice chap and makes great soya moka :))

with regards to us not having a name above the door, we are waiting for the awning to arrive ( it should be here in a couple of weeks) That will have our name on the front bit.
Once it’s here we will see how the front looks and if we need a sign.

The London Tube Map by best local coffee shops. A couple of “local” mentions on there. 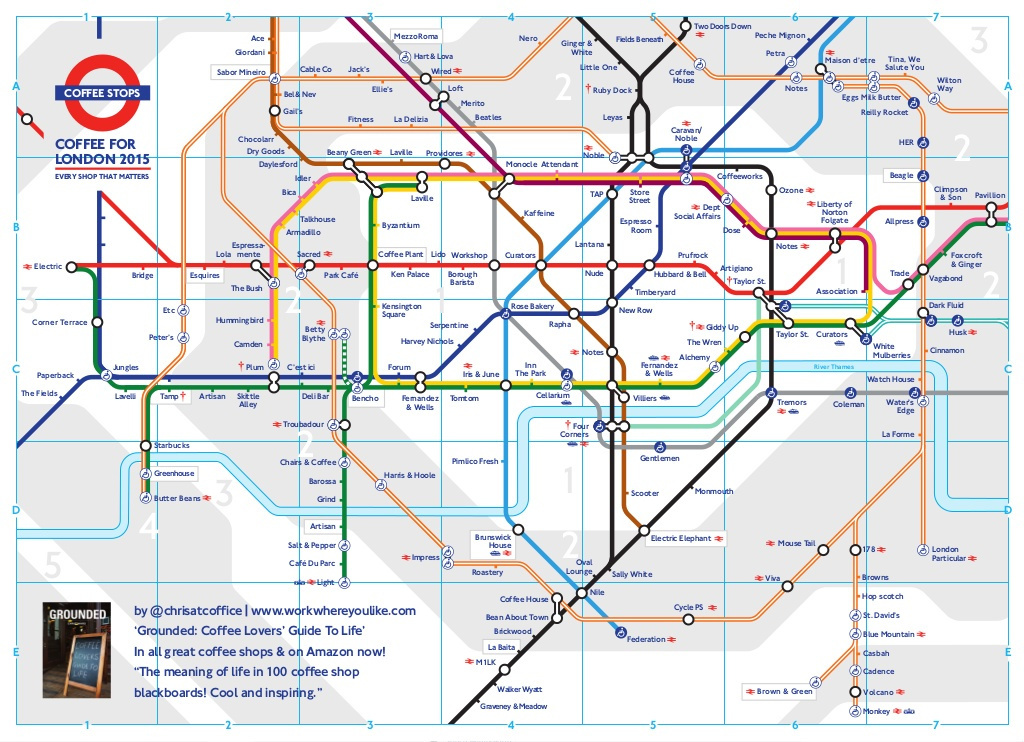 The Teapot in Forest Hill does pretty decent coffee. Also worth mentioning the Blue Mountain Cafe on Sydenham High Street, at the roundabout.

And a great ice latte: 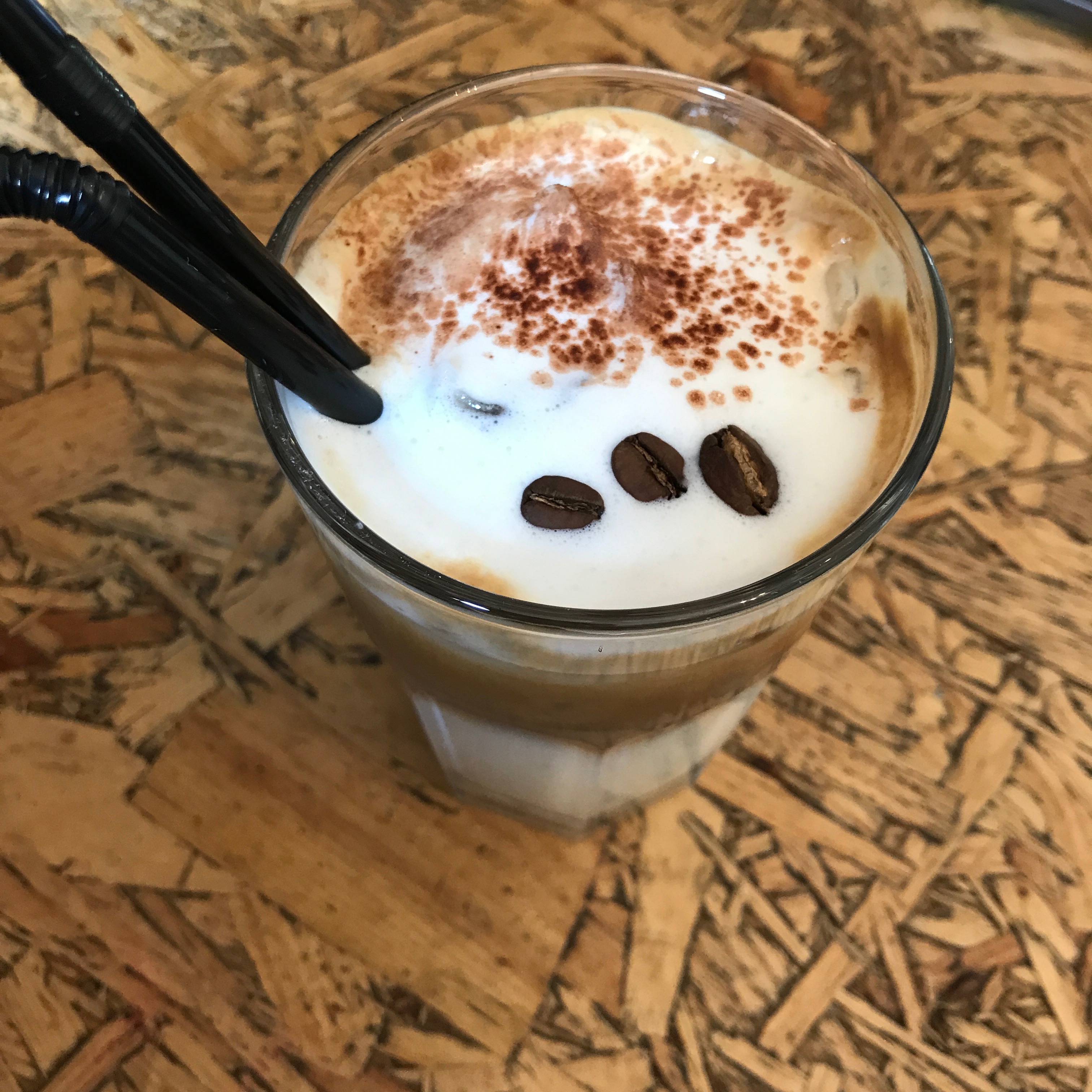 The Capitol has a fairly decent Lavazza filter coffee with free refills, at under £1 is the cheapest.