5G has arrived in the UK, and it’s fast

Coverage is limited but not terrible.

Thanks Chris. Still time to get any letters of objection in. They have to be sent to Lewisham Council by 1st June.

Interestingly, and perhaps to the annoyance of EE, the BBC reported on the EE 5G launch today, but also added a section on “Is 5G safe” at the bottom of the article:

EE switches on its next-generation 5G mobile network with a Stormzy gig.

Hi there, sorry I forgot to reply previously. If you look at the new LED street lights on both Forest Hill Road and Netherby Road you will see a small spike, this is I believe a Femtocell transmitter. Essentially they are already in place, ready for when 5G is rolled out.

Great if it is, but are you sure that’s not for the leafnut control system used across Lewisham and other councils? Can you post a picture?

Oh OK, just looked at Leafnuts, that looks them, but they aren’t they also continuously emitting wi-fi and potentially connected to health-risks…?

Before hanging the wallpaper when next you decorate, hang a layer of tin foil. This should stop the WiFi signals from getting into your home, at least.

Wi-Fi: are there any health risks?

Ask Jack: Hermie's Wi-Fi uses the same radio frequency as his microwave oven. Does that mean Wi-Fi is dangerous to his health?

Hi Promofaux, I get the sense that you are taking the piss and that is possibly deserved given my lazy comment made last evening.
I’d like to make it clear, I am not a flat-earther, a tin-foil hat wearer, a conspiracy theorist or a fan of David Icke, but I am concerned about the potential affect of technology that has not been tested for its long term affects on humans. The fact that Lloyds of London has refused to insure wireless technology is interesting, why might that be?
On 6th Feb this year, US Senator Blumental asked a question in regard to any ongoing independent scientific studies into the affect of 5G on human health. There are none.
I personally am not happy about being a guinea pig when it comes to this technology, if that makes me crazy to some, ce la vie.

It may or may not have been said with my tongue wedged firmly in my cheek.

It was a comment on the general idea, rather than personally levelled at you, apologies if it was taken as such.

I am not a flat-earther, a tin-foil hat wearer, a conspiracy theorist or a fan of David Icke

And yet those that are, are, are, and do are the ones writing blog posts and “articles” on the subject. Which makes it quite difficult to properly research the subject and get to the facts

The fact that Lloyds of London has refused to insure wireless technology is interesting, why might that be?

It really took some digging about on the internet to find more information about this. On the surface, you are correct in this statement. As attested to in an article in The Observer back in 1999, and I am yet to find any evidence to the contrary.

Concern about the safety of mobile phones has prompted a leading Lloyd’s underwriter to refuse to insure phone manufacturers against the risk of damage to users’ health.

So down the rabbit hole I went… after several search terms based around the words “Lloyds” “London” “Refuse” “wireless” “5G” etc, and clicking to the 10th+ page or so of search results for each term, I stumbled upon a paper written by Lloyds covering the subject, and a screen grab of the executive summary from it. 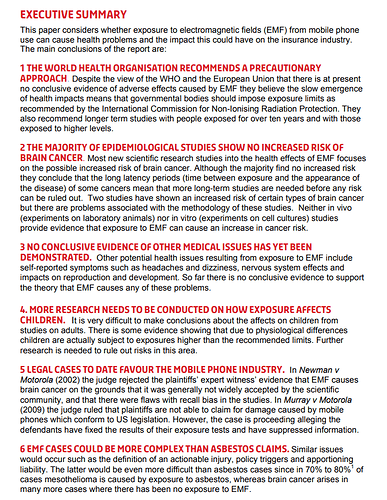 If I’m being honest, I have no real strong feelings on the subject, and I’m no scientist or doctor. But when presented with some information, I find it pays to go searching for the other side of the story. Yes I’m a pompous git sometimes.

I personally am not happy about being a guinea pig when it comes to this technology,

Adam Puts on his Conspiracy Theorist hat : If we were being used as guinea pigs for this sort of thing, then those experiments would have happened years ago and in secret before the technology was even considered being announced to the public.

Leafnuts, that looks them, but they aren’t they also continuously emitting wi-fi and potentially connected to health-risks…?

The leafnut system looks to predominantly use the 868MHz ISM band to link the majority of nodes to a central hub which then also has a mobile phone-like modem to communicate back to base. It is not WiFi, but says it uses WiMAC - likely either a proprietary protocol or typo in the marketing department for WiMAX.

The 868MHz is the same as garage door openers, wireless burglar alarms, some wireless CCTV and so on use. It is unlikely to transmit continuously as that would waste power, and it is also a requirement for devices using this band not to ‘jam’ it and co-operate. This means they are restricted to short bursts or chirps of transmission with lots of gaps in between.

I’m doubtful this system has health effects, especially as the transmitters are generally a few meters up so the radiated power very small at street level anyway. There is however a Daily mail article about these systems which claims residents of one village had all sorts of ill health effects from street lighting systems - I won’t link it here as it’s tripe, but I’m sure you can find it if you are interested.

As for generally worrying about this stuff… well if you search around there’s lots about coffee being a carcinogen or not, and even pottery can apparently be toxic too, particularly when firing it. As pointed out by @promofaux there is a lot of bad science written out there so it makes it difficult to form an objective view.

Here’s a reasonable article from Sky news discussing the safety of 5G and mobile phone use:

Is 5G safe for your health?

The government is adamant that 5G is safe. Here's what the scientific world says about the electromagnetic spectrum.

Just read an article on the subject of misunderstandings of claims around high frequency radio waves, figured it may be if interest here:

The 5G Health Hazard That Isn’t

How one scientist and his inaccurate chart led to unwarranted fears of wireless technology.

There seems to be a lot of misinformation about 5G. This recent article may help:

Are these masts dangerous or is it just fearmongering?

According to the WHO:

Eating pickled vegetables and using talcum powder are classed as having the same level of risk.

Alcoholic drinks and processed meat are classed as higher risk.

Interesting write up from the Guardian:

How baseless fears over 5G rollout created a health scare

Junk science is a fact of life. Between hyperbolic reporting of careful studies, careful reporting of hyperbolic studies and “common sense” dismissal of any studies at all, it is getting harder and harder for non-experts to separate reasonable concerns from medical misinformation.
…
Jones is firm: there is absolutely no evidence that 5G, or any other part of the network, is dangerous. “The wavelengths that 5G uses and will use are all entirely safe and have been in research and testing for decades. It’s a red herring to say it’s a new technology and therefore hasn’t been tested,” he says.

To fully debunk the health fears around 5G is impossible: there is no consistent set of claims being made, few explicit studies being cited, and a surfeit of scientific terminology being used in ways that obscure rather than illuminate. Not a single expert the Guardian spoke to believed there was any reliable evidence of harm from 5G or any other part of the publicly licensed broadcast spectrum. …

Notably the planning permission for this particular antenna has 6 objections at present, though the Lewisham website doesn’t divulge the reasons or text.

The planning application for the antennas on the Greystead Road flats was granted yesterday.

Dear Nicky,
I have just found your post about 5G. I am really concerned about wireless devices all together as they are dangerous. How did you get on with finding someone to leaflet with, and did that 5G mast go up in the end.

Currently I have some time on my hands to do some leafleting if the offer is still on the table.

I would like to join an active group that will protest against this violation on our health and wellbeing, and also the trespassing of all this radiation into our homes without our consent.

I don’t use wifi in my home as I am electro sensitive and most times carry my RF reader with me to demonstrate to people what the RF’s from their devices register. My device flashes red when radiation is extreme. I am getting more and more unsettled with the amount of masts that are going up, not to mention the biological affects I have, my skin itches and I feel nauseous. Being at home is more bareable since we ethernet cabled everything in. But I am so sensitive to the neighbours devices sleping at night I get a slight head ache and ear ache. I then measure the readings and they confirm the rf’s are high. Sorry to ramble on. I think there will be a protest against 5G January 25th 2020.

5G, as with 3G, 4G, WiFi etc., is harmless. It is very low power, non ionising radiation. It is not capable of doing any significant damage to the human body.

I do think the cumulative effects need to be considered. I am sensitive to resonance myself. I do have a problem with the electrical processes in my heart. My cardiologist has said it’s idiopathic. I don’t know if my sensitivity to resonance is a result of my conductivity issue or may be a cause. But remember it took a long time for sonar to be recognized as causing problems for whales.

A couple of interesting websites here:

Appears to be just precautionary, but it seems significant that government is issuing the precaution.

It’s not long ago that petrol contained lead, and houses were riddled with asbestos. Who would have thought these might be harmful?

I’m no expert on RF radiation, but I think it’s reasonable to be cautious where we can be.

Hearing and seeing how 5G is being installed just like that is shocking. Not liking this who authorises this and the health issues it can cause. We don’t need it some areas have 2 big giants next to each other already.