Update: while the discussion here has closed, the poll remains open to votes. 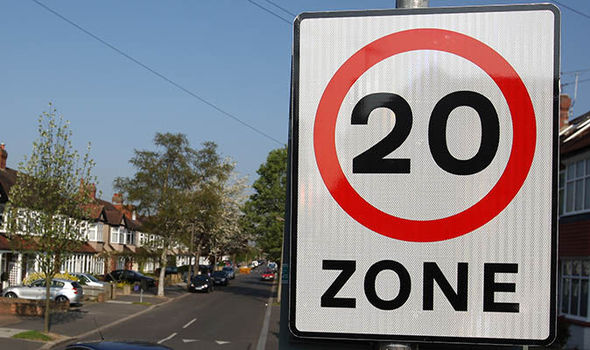 With the arguments for and against in mind:

Why does it matter whether the vote cast is by a driver? We are all road users.

It might not ‘matter’ but it’s the sort of data you need to collect if you want to get meaningful results about people’s opinions. If you don’t ask the question, you can’t interrogate the data.

There is no category for occasional drivers. How regularly do I need to drive for my vote to be possible?
Either way I have a problem with answering this poll as I think that doing so might make me a hypocrite. I am one of those drivers who has been known to exceed the 20mph limit (I suspect I’m actually in the majority).

I think a better survey would be to measure speeds on Southend Lane on a day when there isn’t a 1/2 mile jam. Motorists can vote by driving at the speed they normally would. I suspect most would be found to be exceeding 25mph and this should count as a vote for 30mph limit.

I wonder if the majority of smokers would vote for an increase in cigarette tax - probably not. But that doesn’t mean that the policies of increasing tax on cigarettes or reducing speed limits is actually a bad thing. We need a nanny state to tell us how to behave because otherwise we will hurt ourselves and others. These are issues where direct democracy may not be the best way to make policy. People have a nasty habit of making the wrong decision when asked to vote on them directly (now I’ll probably get another a stern letter from the management).

There is no category for occasional drivers. How regularly do I need to drive for my vote to be possible?

Agree - although I didn’t want to overwhelm the poll with different options. I’ve clarified under the poll:

We need a nanny state to tell us how to behave because otherwise we will hurt ourselves and others.

We need a police force to deter criminal behaviour. We need some fundamental rules in place to prevent anarchy. We do not need a nanny state IMO. Hugely belittling of the UK public to suggest so.

Hugely belittling of the UK public to suggest so.

I suggest that we need some speed limits imposed by government for our own good, and we need to be discouraged from smoking through taxation for our own good. Both of these are the work of the Nanny State, but I fear we may be straying into politics or ethics - which I mustn’t discuss on the main forum. My point was that drivers are not necessarily the best people to ask at what speed they would like to drive - let’s judge them by their actions.

I’m confused. I thought there already was 20mph limit across the borough? Are you polling to see if it should be changed?

Are you polling to see if it should be changed?

It’s a poll to find out how people feel about the 20mph borough-wide limit, one year into the policy.

I very much doubt it can be changed. When post-implementation data became available Manchester was able to halt its scheme rollout as it was only partially implemented across the city. When Bath council discovered their 20mph zone coincided with increased deaths and serious accidents, they considered reversing the scheme but didn’t have the cash to do so. I suspect Lewisham is in a similar position regarding available cash.

I didn’t know there was a borough-wide 20 mph limit - is that enforced or recommended? I’m afraid I haven’t respected it unless there were clear speed limit indications on the roads.

I know this is not Hansard, but it seems important even in a small local setting that untruths and half truths are challenged where they are invented solely to support an ideological argument. Entertaining as it is, the methodology of this poll means that it answers no questions at all, and no conclusions can be drawn from it. The questions are flawed, the sample size tiny, there is no weighting of respondents, who are drawn from a self selecting sub group within a self selecting group of SE23 participants. It carries about as much weight as the one that the NewsShopper ran with a similar agenda.

The popular 20mph policy has substantial national support.* Several professional and credible national research projects show this with representative sampling etc, etc. The results keep coming out the same. It is not a party political matter or an ideology, it is what a strong majority of people say they want.

Implementation, compliance, policing, enforcement and outcomes are proving difficult and complex, but there is no doubt that it is still what a majority say they want.

Perhaps the poll is just for fun, but I see that already it has already been used on this site to claim evidence of an unpopular policy. Why do this? From a psychological perspective, faced with unpalatable truths deniers often adamantly refuse to accept verified scientific facts because they get in the way of their own rigid ideas.

yes there is, on all roads except a few main ones, such as the South Circular. It is the law and mandatory, though compliance seems low and enforcement patchy at best.

As mentioned several times before, the studies you link to are irrelevant as they were not for borough-wide limits.

Our 20mph zone covered roads that simply don’t match the limit, and the Association of Police Chiefs are skeptical about enforcing them: 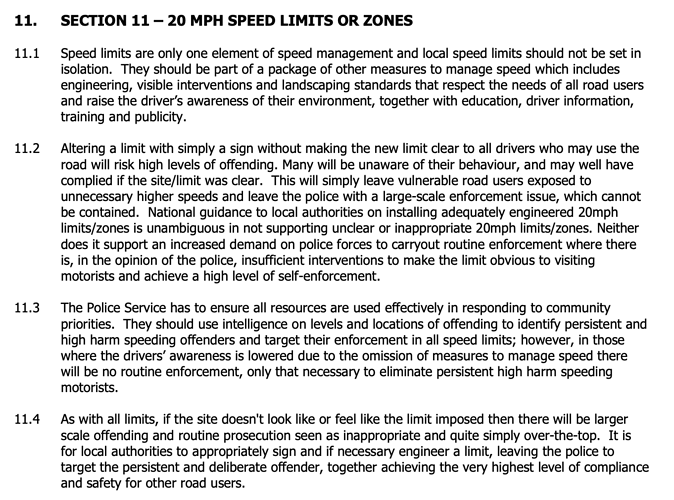 So far, our poll result matches the results of an official council study in Tower Hamlets which showed their borough-wide 20mph limit was unpopular.

Sorry you don’t like the outcome of the poll so far, but you and I have both been very vocal on the topic of 20mph limits and I think we ought to step back and let others have their say. That was one of the intentions of the poll. To discourage vocal minorities dominating the discussion.

I neither like nor dislike the outcome of this poll. I am just saying it is patent nonsense, shows zero understanding of research and no conclusions can be drawn from it. As you suggest I will say no more about it.

Where is your evidence that ACPO non-enforcement is based on that reason alone.

There are many pieces of enacted legislation that are unpopular but that does not mean they are wrong.

I just like the idea of slow cars. They seem so much more peaceful and friendly than fast ones. Lower one’s blood pressure and strengthen one’s marriage .

The Mural vote was heavily promoted on social media and has been running for a lot longer.

I think that non-drivers votes are as important as drivers as they are impacted on by the pollution and the traffic speed as much as anyone.

I suggest that you read this >>

Why Bath council was wrong about increase in 20mph zone deaths

A council report said the number of injuries or deaths had risen – but is this correct?

More data needs to be collected. But no one has yet refuted the Bath council report, which is here:

This is a good analysis of the Bath report. tl;dr: The report was statistically incompetent and its conclusions are biased. https://medium.com/@lewisspurgin/20mph-zones-are-not-causing-more-deaths-37d41e30e297

This report has been widely shared here, on the other topic where we responded to it, and also in Hilary’s article.

It claims the Bath council report results aren’t statistically significant. It also claims the choice of control area was bad. Which is interesting. The accident rate was high in the control area. If a different control had been chosen, the results for 20mph zones would have looked even worse.

It may be the case that there’s not a statisticially significant worsening of accident rates in the 20mph zones. But accident rates have worsened in 7/13 zones, and improved in only 2/13 zones.

What is clear is that the 20mph limit in Bath has not made roads any safer so far.

This isn’t true either. The number of accidents in a given period of time is going to vary due to factors having nothing to do with ‘Safety’ (and possibly randomnes) explaining at least some accidents. Therefore this conclusion cannot be reasonably drawn from numbers cited.

@Beige, perhaps I wasn’t clear enough in my post.

The point is this:

What’s interesting about this poll is how it was converging on a similar result to the Tower Hamlets 20mph Zone opinion survey over the first few days, and then in the last 24 hours or so the results changed radically toward favouring 20mph.

Of course this is just a straw poll, and the results will be affected by who is invited to participate, and why.

Next time we do a poll like this, I’ll make sure it’s in the #lounge. This will help keep the sample representative of local people. I’ll also close the topic to replies in cases like this, to avoid people lashing out at others.

The poll remains open to votes.