Bonhoeffer was the topic of Thought for the Day on Today (Radio 4) just now.

For anyone who was wondering:

Dietrich Bonhoeffer (German: [ˈdiːtʁɪç ˈboːnhœfɐ]; 4 February 1906 – 9 April 1945) was a German pastor, theologian, spy, anti-Nazi dissident, and key founding member of the Confessing Church. His writings on Christianity's role in the secular world have become widely influential, and his book The Cost of Discipleship has become a modern classic. Apart from his theological writings, Bonhoeffer was known for his staunch resistance to Nazi dictatorship, including vocal opposition to Hitler's euthana...

When Bonhoeffer was offered a parish post in eastern Berlin in the autumn of 1933, he refused it in protest at the nationalist policy, and accepted a two-year appointment as a pastor of two German-speaking Protestant churches in London: the German Lutheran Church in Dacres Road, Sydenham, and the German Reformed Church of St Paul’s, Goulston Street, Whitechapel

And a bit more information can be found at: http://www.foresthillsociety.com/2013/06/bonhoeffer-saint-of-forest-hill.html written by a leading expert on Bonhoeffer in this country, who lived in Forest Hill a few year ago.

When one reads Bonhoeffer’s work from before his time in Forest Hill, and his time afterwards, one is struck by the difference in tone and style. After his return, he spoke with a new frankness and confidence. The young pastor seems to have found his voice while living in the Manor Mount parsonage, and to have undergone an important, personal change – seeing his calling in life to be full-blown opposition to Nazi ideology in all its forms. This change was to have consequences in Bonhoeffer’s life which are now very well-known. Some years later, around 1940, he decided that, notwithstanding his pacifist convictions, he would try and help end the Nazi regime by any means necessary, even violence. He became involved in a group which were plotting to kill Hitler, and then hoping to broker a deal with the Allies for a German surrender. This group’s attempts were unsuccessful, and as a consequence, Bonhoeffer himself was implicated to the authorities. For this reason, he was executed at the Flossenbürg Concentration Camp, on April 8th 1945, aged 39.

I grew up in Germany as family moved there when I was tiny. I wasn’t aware of the German church or any connections in Sydenham until couple of weeks after moving here wandering around exploring the neighbourhood and the name just caught my eye. Even the board outside church with the name on it is the same style as you have there. Having done history rather thoroughly in Germany (not a subject which can be dropped) I remember learning about him in school.
This also reminds me I have to visit the German food van next Saturday again!

What a sad ending for a man trying to rid his home country of a maniac & his fanatical ideals. 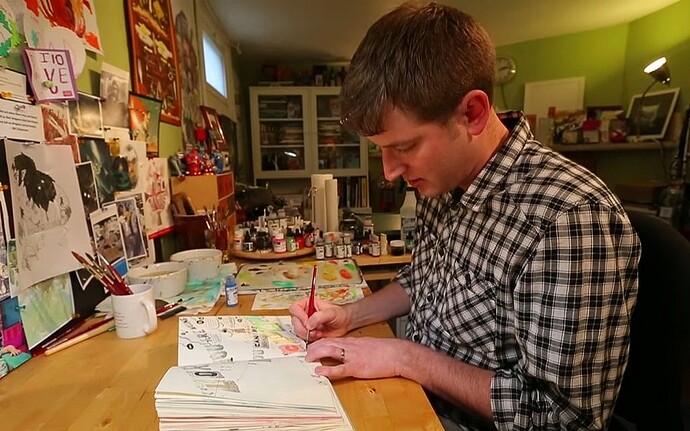 Artist John Hendrix, himself a man of faith, immortalizes theologian and anti-Nazi activist Dietrich Bonhoeffer in 'The Faithful Spy,' a serious comic for teens and tweens