The foxes have learned to open the food waste bins

I suppose it was inevitable. Is there anything that can be done? Should l be putting rocks on the lids, or something?

The only time the foxes have managed to get into my bin was when the handle ‘jumped’ the hinges so while it looked locked, the mechanism wasn’t actually engaged. This was when I’d left the bin out for collection and the handle was in the upright position, so easy for the foxes to push it back too.

I wonder how they would manage to push up a fully engaged down handle?

Is there anything that can be done?

Environ Pest Control are happy to provide you with a free site inception of your premises so that we can submit a proposal for a successful proofing programme. A site inspection may encompass many houses or buildings so that proofing can push on populations of fox that recognise these areas as part of their territory.

The fox has become an increasing problem in the London area as recent news reports have shown and the methods to control these vermin have evolved considerably.

We are committed to the humane control of foxes in London as we are aware that the fox is not a species that should reside in significant numbers as they do.

The fox population is now estimated to be between 25,000 and 30,000 animals in London and without effective pest control will we notice an increase in incidents like the unfortunate events taken place recently.

To get your property fox-free and keep it that way, request your call back to book your treatment now.

After the First World War, foxes migrated into urban areas of the UK and this was mainly due to a change in people’s lifestyles. Rural foxes quickly urbanised and benefited from food sources and shelter in the relatively large gardens, from compost heaps, bird-tables and garden buildings.

Foxes are now urban animals and have become used to living near to people and successive generations have spread inwards towards city centres.

It’s usually the clip not going over the tabs. I’ve made the same mistake. You can also wedge the food bin between your black and green bins.

Where is this information coming from? As @hollow says its far more likely the bin was damaged or incorrectly sealed.

Also important to note foxes are not vermin and have never been classified as such by DEFRA. Fox control methods or destruction are largely ineffective as fox populations are self-regulating to the amount of food available- if you destroy foxes (and it is illegal to do so improperly) more will take their place. Proper control of food waste will mean foxes food sources are generally actual vermin such as rats and mice, as well as berries and insects and the fox population that can be sustained will decrease.

There is almost no risk of disease transmission to humans, provided fox faeces is not handled by bare skin (a similar risk exists for cat faeces).

I’ve seen a few food waste spillages on our streets this week, so I think it might not just be me.

After seeing lots of food waste strewn across the street a few weeks ago, I was very careful to make sure my food bin lid was securely fastened. I got woken up in the early hours of the morning by a fox who had managed to open it and was dragging the bag out to tear it open. I now put out my food waste on collection day and not the night before.

Foxes are not vermin unless you are a pest control company wanting to be paid to kill them.

I feel honoured by the foxes that come into my garden to sun themselves, and am delighted there are two cubs this year.

Proper use of the food bins will prevent foxes from getting into them.

Yes, same with me this week. I was extra careful the other night as ours included chicken bits. Heard scuffling outside in the night, and in the morning, the bin was open, upside down and the whole food bag was gone, and nowhere to be seen. Grateful not to have to deal with strewn rubbish, but I imagine someone else had the pleasure…

We had our food bin opened and spread across the front garden every night for about a week, and yes it was properly locked. I tried leaving it in the back garden the next night and had same problem all over the garden.
This is despite having a dog who wees in the garden but obviously their scent doesn’t deter the fox.

We’ve now resorted to no compost bin for a few weeks to see if they will forget about ours and then we will only use it for fruit and veg waste.
But does anyone have any ideas for locking the bins more securely?

Ah yes., they have mastered opening the old style ones with the long handle on top.
You can order a new one from the council website that has a press down lock on the lid… they haven’t mastered them yet as far as I’m aware!

Order a bin or sacks

I think they throw them around until they burst open!

Thank you Suze, worth a try!

I haven’t worked that one out yet either

.
We had to put a brick on top of our old one. Then they started to chew it.

This works for me. It’s bungee cord holding the handle in that position. It’s a bit of a hassle and the refuse collectors seem to struggle with it (so I take it off in advance), but it does stop foxes. 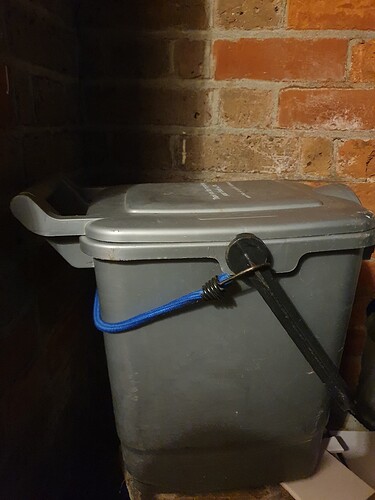 Bungee power brilliant idea share! That would of saved a bundle of money on a new design & production plus old bins being wasted.
Any simple tips for squirrels eating most of the birds seeds

? Apart from don’t fed them.

Any simple tips for squirrels eating most of the birds seeds

No, squirrels are invincible.

You can buy a bell shaped contraption from RSPB that can be fitted to the pole. I’ve had one for years and the squirrels haven’t found a way around it (except for one that jumped from a nearby tree but I guess that hurt as it wasn’t repeated). Just make sure that it’s 4 or 5 feet up the pole so they can’t jump above it.

I’ve used one of these as well and it worked 100%, as John says though it needs to be away from trees or fences where they can jump straight to the feeders from height.

My daughter watched a squirrel one day in our garden bite through a string holding a fatball on a tree, then getting it in his mouth WHOLE & scampered off!