Hi. I’ve just inherited a property from my mum who has sadly passed away. I went to visit it today and was HORRIFIED at how Greenwich Council have left one of their street trees outside to grow so huge that it’s totally blocked the property out. I’m dreading dealing with that council, as I know that when my mum was younger and full of fight, she struggled for years with them asking them to at least cut it back. The more she asked, the more the man at the department dug his heels in - saying it was a useful part of the flora and fauna. It’s a massive lime tree - something that should never have been planted down such a tiny, narrow street. It’s so huge that the house is now completely in darkness and it’s leaves give out a glue that stick to the windows. Rarely did she even get them to trim it back off the property. What really angers me now, is that I’ve seen that the whole street had their lime trees removed about 5 years ago, and replaced with the most beautiful, pink blossom Myrtle trees…leaving JUST THE ONE lime tree outside my mum’s property. The roots are pulling up the pavement and go under the house, the tree blocks the pavement making it very narrow to walk past.

I remember my mum being so desperate, that she had to write to her MP. Not much even came of that. It almost looks deliberate as how can they remove and replace all the other lime trees and not hers? Who can I contact to be listened to? I’m still grieving and I really can’t take on any more stress. As the property is still in probate and technically still under her name, do I have any power? My MP is Lewisham, not Greenwich. I need a specific name not just a department to write to and be listened to. The property is tenanted and the conditions are causing my tenants to be depressed with the darkness. I am responsible for the tenants well-being. It makes the house look uninhabited, unattended and run down - a dump, de-valuing it. Can anybody give me a name to write to? Someone in authority? 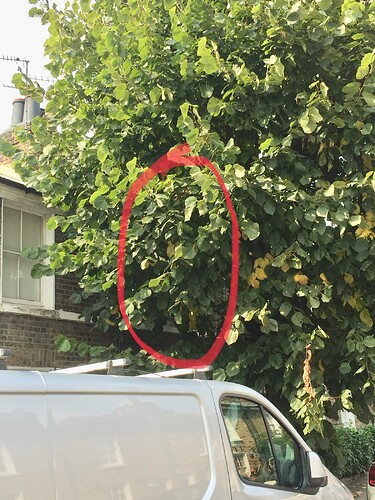 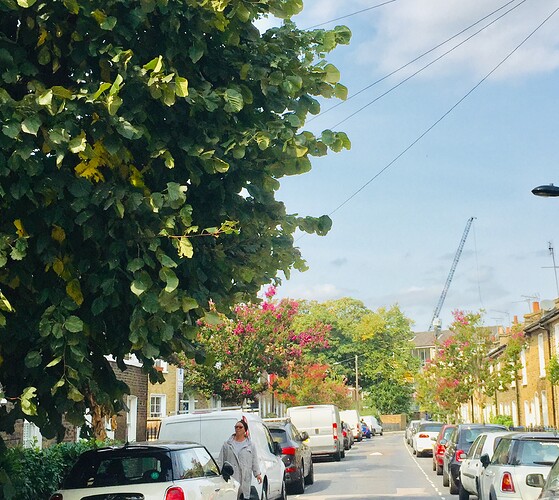 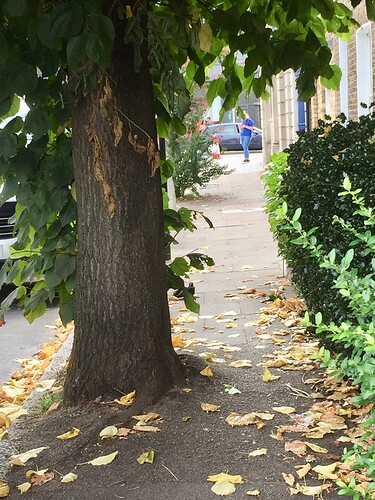 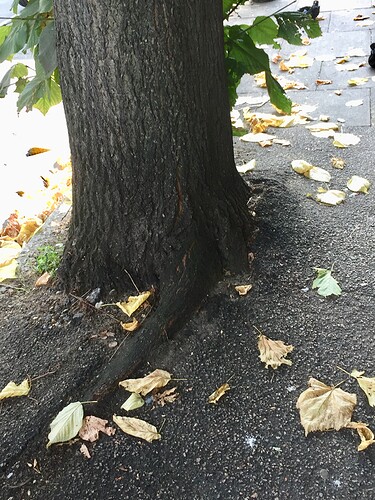 tree roots ww2448×3264 2.43 MB
and some laws/rules/regulations that I can quote that they’re breaking?
I’ve attached photo’s showing how huge it is in comparison to the other trees that have been replaced, how huge it is in comparison to my friend standing underneath it, a photo of it’s roots pulling up and blocking the pavement and a photo that I’ve circled where the front top window is…IF you could see it behind the foliage! 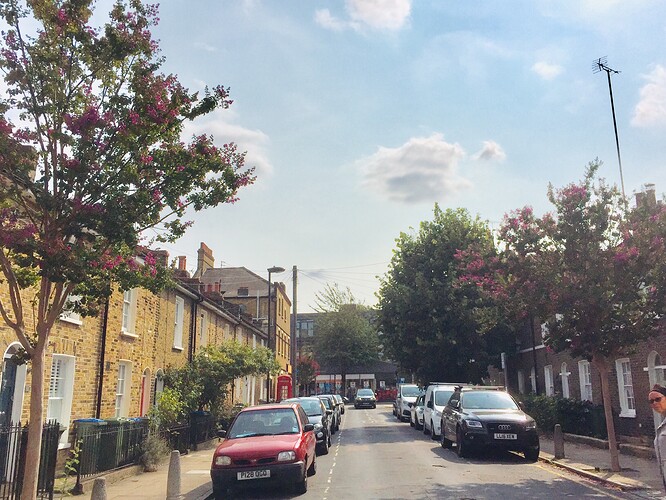 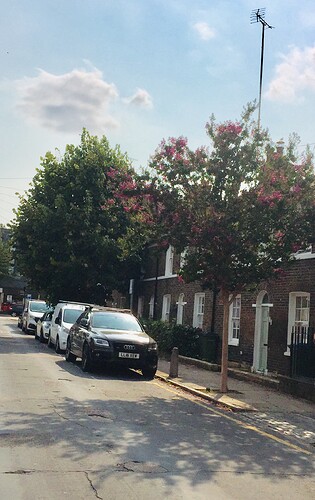 I think there’s probably quite a lot on the web about trees and what you can legally have done - but I suspect it has to be overhanging your property before you can make a case.

But anyway, what I really wanted to say was that if you have inherited the property, you are presumably now the owner and paying council tax and such, and therefore while you may currently live in Lewisham, Greenwich should be perfectly answerable to you too - maybe use the property address in the borough and make sure any tenants forward any correspondence to you.

I’m not sure it’s an issue to take up with an MP in the first instance, but certainly you can “Report a tree problem” here:

This might be a good first step to getting it trimmed.

Just want to say I’m so sorry for your loss Gillipops.

Thank you sweetheart, that is so kind of you. I was feeling down and that’s really warmed my heart x

Hi. I’ve now received the response from Greenwich council regarding the tree and I’m extremely dissatisfied. Can anybody with a knowledge of legal things give me a by-law or something to prove that the tree is blocking (and pulling up) the path and making social distancing impossible? Also, can anyone suggest who I get in to prove that the roots are running under the house? Would my local tree surgeon be able to? please see the council’s response below…

‘Whilst the Council has some sympathy with Ms. Gill’s position in relation to the street tree in question, it does not remove healthy trees unless there are compelling reasons to do so. The removal and replacement of previous trees in the road has been the result of long-term management/maintenance and not a one-off tree replacement programme. (Three lime trees have been removed from Whitworth Street since 2003. One of the trees was substantially dead, the other 2 trees were removed due to footway damage and because the footways around the trees could not be safely maintained.)

There are a number of similar trees in the adjacent Colomb Street which along with the single Lime tree in Whitworth Street will continue to be managed until removal is justified. Like the trees in Colomb Street the single Lime in Whitworth Street is pollarded on a 3yr cycle with works due to be carried out during the coming winter months. The Council’s policy is to maintain a healthy population of street trees and there are sound reasons for doing so. The policy also recognises that there can be inconvenience but it generally reflects a preference for green tree lined streets.’

Quite a few years ago I persuaded the council to remove a very large London Plane tree from the pavement. Reluctantly since it was a splendid tree. However it was bigger than any of the houses and it’s roots extended a long way from the trunk.

What clinched the argument was a surveyors report which showed that the tree roots were under a bay window, we had samples analysed, and cracks were appearing. Showing that the house was actually being damaged by the tree with a professional report from an insurers surveyor did the main trick. Even then the council officers were reluctant, but a discussion with and support from a local councillor forced it through. Essentially the choice for the council was to remove the tree and the source of damage to the house, or their liability for costs of underpinning and repairs would increase.

Opinion on the tree counted for nothing. It was the professional proof of physical damage that was important.

We had pretty much this exact experience with a tree that was on council property next to our house. Our home insurance handled all the dealings with the council, measurements etc. Tree got taken down in the end.

I’m not personally advocating such a solution, but it’s common knowledge (and I’m told quite hard to prove) that drilling copper screws into the base of the trunk will kill a tree in 1 - 3 weeks (depending on its height) and it’ll have to be removed by the council.

Not so great for the poor tree surgeon who has to cut it down when it dies! Nails and chainsaws are a bad, bad thing.

Hence the reason, so I’m told, that you use screws. It’s so that you can remove them once all the leaves have fallen.

You may be able to sue the council under ancient lights.

I’m sure there’s a council law around footpath width and that trunk might just be encroaching on it.

Gillypops, provided it isn’t subject to a Tree Preservation Order or the house is in a Conservation Area you can get a tree surgeon to cut the overhanging branches back to your property line, but not beyond, without seeking permission from its owner. However, the branches you remove still belong to its owner so you must offer them back to, presumably, the Council. I wouldn’t recommend you get “a mate” to do it as you would be responsible for any injury or damages caused, including death of the tree itself, and tree surgeons carry insurance for such occurrences.

I would bet that in its early days this tree would have been pollarded, pleached or otherwise pruned on an annual basis. This was what happened with stree plane trees in Battersea where I was born and also Bermondsey when Dr Salter was Medical Officer of Health (late Victorians thought firstly that trees would help suck up pollution from coal fires, and secondly that plane trees were likely to be more resistant than other species as their bark ‘moulted’, preventing a build up of soot). The Victorians would have thought it a daft idea to put a large forest tree in a side street without such regular management. In view of higher labour costs and other calls on funds this regular pruning is not now done. I’m not sure Greenwich should be moralising about saving the tree or the planet if they are neglecting the necessary work which was originally intended to make this approach possible. Have you thought of offering to plant a couple or three smaller trees to make up for the loss? Or else asking Greenwich to undertake regular maintenance?

Hi John. I was going to bring my tree surgeon along just to assess if the roots were causing damage to the property, as they’re certainly pulling up the pavement. I wouldn’t pay for the tree to be pruned…no way! The council tax in Greenwich is sky-high, and I won’t pay to do their job. I’ll sweep the filthy pathway that’s full of all the litter blown in from Trafalgar road because I’ve never seen a council road sweeper in the area, but I won’t pay for a tree surgeon