It’s been so wet I’ve not put any peas in the ground yet, but I think I will try this week to put some in a gutter in the greenhouse and get going that way. First spuds hopefully in the ground next month also.

For the first year I will have a Greenhouse, and coupled with a Heated Propagator with lights (Geopod if anyone is interested) I sowed the tomato, cucumber and pepper seeds this morning - the kids chose their own favourites from last year to grow so will have their own plants and hopefully keep an interest for them. Will do a second sowing in 4 weeks or so for backup and comparison.

Tomatoes were - from last year’s seed - Green Zebra, Black Russian, ‘Medium Pink Tom’ and Yellow Bell \ Pear, from my Spanish Uncle in Law, Picon, Rosa and Tumaco and from seed packets Sungold and The Amateur (the latter is new to me).

Cucumbers were La Diva and Burpless, Peppers were Marconi and Colour Rainbow, both first for me.

Have essentially done 4 seeds for each hopefully getting at least 2 plants for each variety.

Anyone else got anything going yet?

I probably need to start some Leeks and Broccoli soon but need to check sowing times - I’ve started a very large spreadsheet!

Waiting to get a slab layed for my greenhouse I got free from Facebook last year. Should be done next week and then the rebuilding starts. Hopefully I can find my reference photos. Then the growing can begin. I have an Aerogrow and plan to get some herbs up and running prior to potting out.

Having taken down a shed, children’s playhouse and various other things to then put together the thought of doing this with a greenhouse filled me with dread, so I was delighted there was one already up and only needing a few windows replacing! I wish you good luck - I’m still trying to work out what to do with the base -it’s slabs around the edges and bare earth in the middle, with couch grass coming up in the slab gaps and in the middle. I think I will try to push the slabs mainly out so I can dig everything out and then try to block anything coming in.

Good luck on that. I had everyone telling me what I should and shouldn’t do as a base and finally got does up and have arranged a really good builder to put down a concrete base. That way, of I ever tire of a greenhouse I can take it down and put up a shed. It also means that I can hose it out. Glass panes are expensive so am buying sheets and cutting myself as I have the broken panes for templates. I have to so, if I did it again I would go for the expense of a new greenhouse and not have to take apart an old knackered one, transport it, and then figure out how to rebuild it.

I haven’t seriously got much on yet - I normally start in March for most stuff. I have got a load of peppers and chilies going despite saying I wouldn’t plant many this year - I think I have over 50 so Ill be giving some away. Week after next I will probably get going with toms and brassicas and they everything else. Over the years I have learned to control the urge to get planting as soon as I see a bit of blue sky!
Not sure what I am doing this year as we are looking to move towards the end of the year - naturally it is pointless growing some things as we wont be able to take them with us…
Debs has all the timings down from last year so I’ll consult her before we start in earnest but if I am honest the potential move away has somewhat lessened my enthusiasm…

Well all my tomatoes, cucumbers and peppers have now come up and doing reasonably well, bar some yellow stuffers that may be dud seeds. Just need to try and keep them going until I can put them in the greenhouse - will probably follow most advice and sow a bit later next year but at worst it’s a good seed test and at best some will keep going and give me some early produce. The cucumbers are definitely growing larger and faster than I expected! 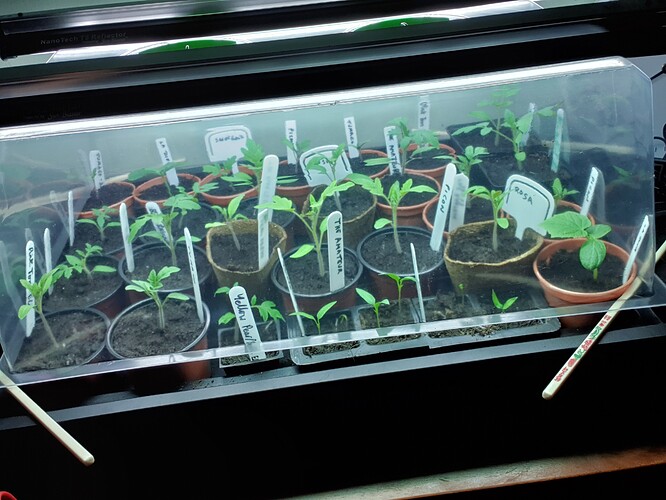 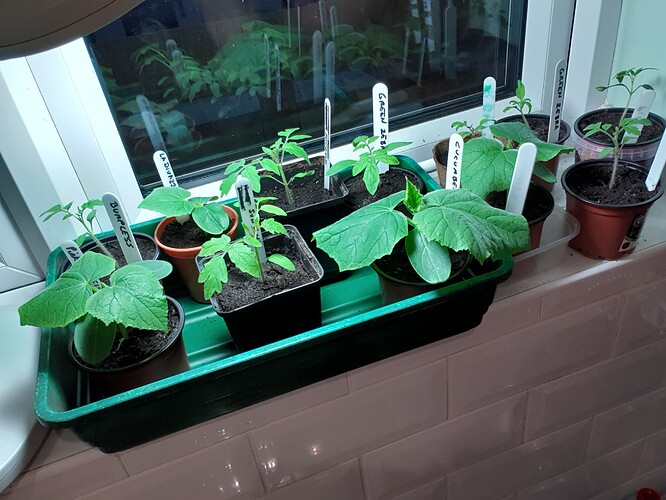 Put my charlotte potatoes in the ground as I’d left them in too warm a room so hopefully the ground not so soggy, and hoping the peas planted a week and a bit go get going soon. Have more to plant which I will do in a few weeks.

Going to try and get some companion plants going and some carrots sown in the next week or so.

Any suggestions for some early crops to get in s small patch now?

Raddish are quick and there are some nice varieties.
Pak Choi and the like.
Baby beets (maybe a little early)
Spinach for baby salad leaf.
Cut and come again salad.
Chard - again for baby leaves
Chives
Turnips - not to everyone’s taste!

Any suggestions for the sweetest strawberries to grow in a pot or hanging basket? I really like Jubilee, but it doesn’t seem as if you can buy the plants. 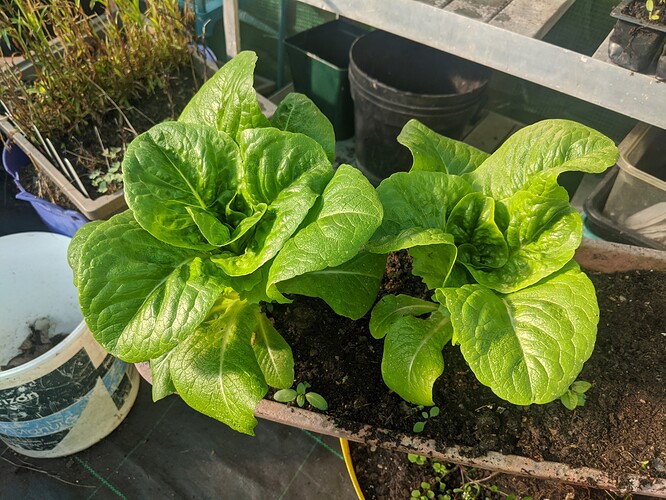 Some early picking from overwintered plants in the poly.

Well I had a slab laid this week and out up my free greenhouse today. Glass in tomorrow and then glass cutting for the panes that didn’t make it

That’s exciting. With a greenhouse you are going to have a bountiful year for sure ! Wish i had one

Has anyone got a large square plant pot base/saucer they do not want. It needs to be about 40cm square. I could buy one online, but it occurs to me that if one of you has one they don’t want then that would be one less bit of plastic in South East London.

Well the tomatoes have kept growing, pretty quickly. Put up the blowaasy greenhouse today and put the tomatoes and cucumbers in this afternoon, as well as some broccoli, calabrese, leeks and brussel sprouts I am trying for the first time this year.

I also have a tray of sunflowers and dwarf french beans ( 16 of each) to try as an early crop of we get lucky with the weather- will leave those in there overnight but Tomatoes have come in. 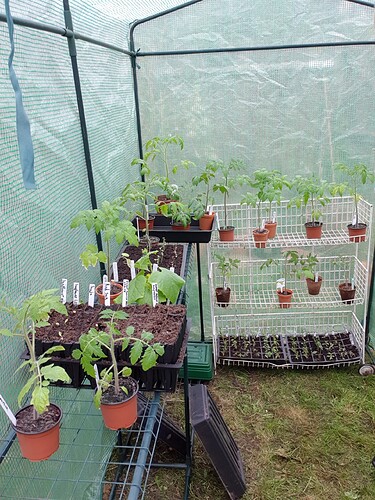 Also have one cucumber plant that is romping away and already has the makings of some cucumbers on it! Have potted it on and will see how it goes - am fast running out of room in the house. This was it a few days ago before I reported it: 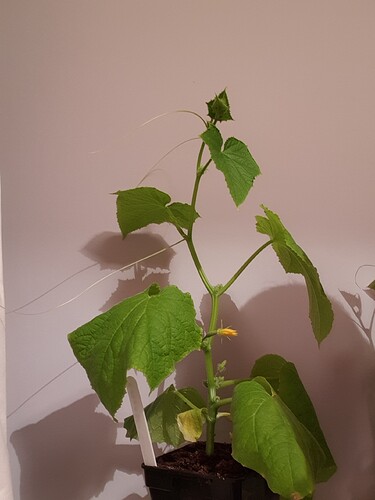 Ideally these would all be going out to the allotment but will have to wait and see how things develop obviously- once our house is out of our 2 week quarantine next week will hopefully pop down and put some more potatoes in the ground.

Plan to sow some squash, more tomatoes for cover and some flowers, mainly borage and french marigold as companion plants, and maybe some lavender. What with staying at home at least I can keep on top of the watering hopefully, though of course not at the allotment if that gets locked down, or I decide best not to go.

I realise it’s not a priority right now but I’ve found it a blessed distraction and a nice hobby that needs daily attention which at present is useful, and will get me some fresh food later this year hopefully.

Looks great mate.
With a potential move on the horizon I have been a little slow this year but I have got a few peppers, chillies, toms and other bits and bobs in.
I am glad I have all the seeds and bits I need as they are getting rarer by the day!

Same re the seeds - that weird thing where you buy too many seeds has come in handy, in addition to saving some last year (will do a lot more of that this year) - and has enabled me to give quite a few away as well. It’s crazy, even getting compost is a mission.

I look forward hearing about your slower year with 60 tomato plants or more!

Hello! Does anyone happen to have any spare potting sale that I might purchase/swap for something? We have lots of houseplants that need repotting but Shannon’s is shut and doesn’t feel in keeping with social distancing to drive down to b&q for non essentials!

Shannon’s is taking orders over the phone for various bits - you can collect from the back which I did today. i think they will deliver too.

Good tip, I thought I saw they closed on Facebook but will have to give them a try!