Artist Raising Funds to Convert Spire Apartment for Studio Use

My London News are reporting on a campaign by local artist Henrik Delehag, who lives and works in Christchurch tower, on Church Rise. They are trying to raise £1m in order to buy the property from the current land lord so that they can turn it into an artists’ haven: 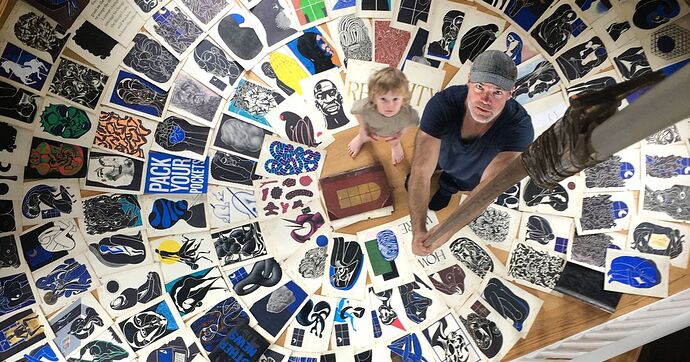 Henrik Delehag, 48, and his son have launched a campaign to save the Christchurch tower in Forest Hill

… the renowned iconographer has devised a campaign named ‘100 years, 100 artists’ to raise money for the purchase of the tower.

If the lofty sum is reached, Henrik plans to set up an arts trust which would allow one artist and their family to live and work in the church for a year before passing over the keys to another.

Speaking to MyLondon, Henrik admitted the campaign had reached a critical stage.

He said: "I first found from the landlord that he basically had to sell it about a month ago.

"I then started the campaign, today is the start of the ten day count down when we’ll really see if we can accomplish this seemingly impossible mission.

"We have a long way to go, the final phase is that we are now looking for entrepreneurs and philanthropists to see if they can take us the next step of the way.

"My mission is to basically put it into a trust which allows the church to be used as a permanent art studio and lodgings.

"The idea is that one artist will be able to live and work there for one year while they work on a project. They will then hand over the keys to the next artist when their year is up.

"I’m calling it 100 artists, 100 years, it’s a magical space for different types of work to be produce. It would be a waste for this building to no longer serve any use for the community and the world around it.
…
"If we do not find the £1 million the church will be sold and developed. Everyone in the community wants the church to stay the way it is.

“I do believe it is the structural centre of the community, it’s very important to keep it turned on.”

The full article gives a bit more context as well as a few new images of inside the nine storey tower, noting we previously covered the attempted sale of the flat in the tower back in February, when it was listed for £1.5m, see 2 bedroom flat for sale in Church Rise.

A bit more information on the campaign and about Henrik can also be found at his online store, where donations to his campaign can be made, alongside the sale of songs of his works:

Henrik Kenneth Delehag (May 26th, 1973) is a Swedish artist living in London. He is best known for his idiosyncratic drawings of the human figure, bringing together the energy of tribal art and the architectural integrity of typography. His works are...

Don’t get it. Isn’t the church grade 2 listed. So it can’t be demolished and turned into flats? And the tower is already developed into living space over several floors. Sounds like it’s for sale for £1 m now instead of £1.5 m.

More info from the artist here, includes many more pics.

There are already a number of flats in the church which was largely converted years ago. There also remains a community space which is used by a daycare centre, a choir. The spire is a single property spread over many levels and was recently listed for sale though I can’t find the listing right now.

Edit: reading the link Thor gave it sounds as if the concern is the spire could be split into more flats? And the proposal is to change it to an art space. Interesting prospect.

Is it this one? Listed to rent?

yes that’s it. If you follow the video tour (which is a really good tour of all floors, with views) its a little difficult to see how the spire could be converted into more than one flat, given constraint of space and the need for stairs.

The artist claims to have raised over £250k towards the £1m to buy it by selling quite large quantities of his art work.

If I was the landlord / freeholder I would be slightly worried that the current tenant is apparently selling the stones of the building.

What!??! It’s a Grade II Listed building! Surely he can’t legally do that?

The spire post dates my house and I love the idea that the former occupants would have watched the spire grow up.

I don’t think he is literally. It’s just representative of an investment from what it looks like.

the current tenant is apparently selling the stones of the building.

I can’t see anything on his website that indicates he’s selling the stones of the building! It’s his artwork that’s for sale.

Yes he’s selling a kind of sponsorship / patronage of various spire features for a fixed amount. Has someone really already pledged £50 k to be patron of the clock. Eye watering. Or perhaps visionary.

Yup - this is it. The “sale” was virtual. It’s been changed on his website now but earlier this year you could “purchase” a stone.

I don’t really understand - is the idea to buy the apartment from the current owner? Who would then own it? A collective or the artist himself?

You’d assume it would be owned as an asset of a company with appropriate shareholders or some such but it’s not that clear it is?

Hope this link to his Instagram works here. Every stone has been mapped using a drone and numbered so that a stone certificate can be issued to each purchaser of art work. Got to admire what has gone in to this project.

It’s not yet clear to me who will own the building but the artist seems sincere and is clear that he wants it to be a kind of community asset and talks of setting up a trust of some kind.

Putting money into this sounds highly risky to me.

But apart from that seems like a pretty good investment…

But what’s a “Totem of Reality” and what does “Vullonday” mean?

I wonder if the CofE is aware of this? The Spire is a leasehold flat. I assume that the freeholder is the CofE? But even if not, there is sometimes liability for maintenance and repairs to Church buildings that has come as a costly surprise to some. It’s called Chancel Repair Liability. Of course I don’t know if that would be the case here, but if I were investing, I’d want to know more.

Good questions here and you’d be nuts to invest money on the strength of what we know. But no one is investing are they? If they were there would be a raft of financial services regulation to navigate. People are just being encouraged to buy artwork that they like at a certain price. The rest is just marketing where he explains what he’d like to do with the proceeds.

If he doesn’t hit target, he can’t buy the tower but there’s no money to return - he will have made some money by legitimately selling his work.

Surely, if that happens, as the aim is a charitable one and most of the sales of his artwork would not have occurred, the artist will donate a big chunk of the proceeds to help artists in some way.

I genuinely don’t get it. His website says “ Artist Henrik Delehag is raising the funds to prevent a 19th century south-London church Tower from being turned into luxury flats.” but surely the tower has been turned into luxury flats already quite some time ago. And it will stay as flats unless the freeholder changes their mind.

If there’s a detailed plan to do something with the flat (which as far as I can see he’s currently living in and using as a studio) then maybe that can be shared.

To be fair, he does say: Should we fail with the mission to secure the Tower, you will be reimbursed the full amount.

That’s in the Patronage page. So I imagine it won’t apply if someone’s bought a piece of art, rather than a Patronage, which is the stone equivalent of all those campaigns about adopting something cuddly with a face (the sort where tiger cubs win over endangered slugs everything time).

We have counted 90 Gargoyles up and down and around the tower. They protect this Tower and mission. Imagine adding one of them to your name. As the Patron of a Gargoyle, you will enter into a discussion with us regarding both involvement and...