Is it a requirement on entering Forest Hill by car to blast your horn?

Someone not drove on at an amber signal?..TOOT! Someone in front not speeding?..HONK! Someone not moving so you can correct your mistake?..BEEP!

If you havent noticed you will now!

do you feel better now? it’s almost as if I forgot we lived in a city packed with cars and other people.

Out-of-towners. Anyone from around here would just be so pleased to be home again they wouldn’t toot anyone to try to deprive them of an extra 30 seconds of time in SE23.

What… are we supposed to sit quietly behind the car in front who’s driver is too busy on their phone have noticed the red light has turned green?

Some people are so impatient and use their vehicle horn agressuvely. Like wherever they’re going is so important the rules don’t apply to them and others must not dare to hold them up for a nanosecond. Someone once told me the definition of a nanosecond is the time it takes for the lights to turn green and someone behind to toot you.

The horn. Use only while your vehicle is moving and you need to warn other road users of your presence. Never sound your horn aggressively. You MUST NOT use your horn

except when another road user poses a danger.

I find the agressive use of car horns particularly aggravating when there’s a traffic jam.

Not to mention the folly of everyone behind joining in after the first driver decided to use their horn. As if it was a committee vote.

The Italians have actually got a corresponding road sign: 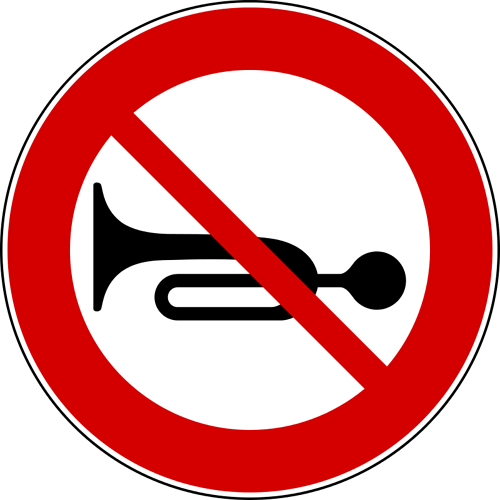 Just be glad you don’t live in India. Horns are used constantly - as indicators when turning, to warn pedestrians on the pavement that there is a car in the road, to announce your arrival at your destination, as a way to say thank you, to show that you will be jumping the traffic lights, to confirm your existence in the world, or just because you haven’t hooted for a few seconds!

But in India it’s invited; most of the lorries have “Sound Horn” signs on the back to let them know someone is there.

The Italians have actually got a corresponding road sign:

Hah! Well that worked, not.

Sometimes, like when the traffic gets bottle necked at school run time on Kirkdale, you can just close your eyes and imagine yourself there.

When I was on holiday in Italy I always thought that the car horn was wired up to the accelerator!

Zen Motoring should be the new norm. I posted about this here:

Eh-Scooters. You have been warned, my British Friends Crime

Am probably really late to it but finally got round to checking this out: ‘The beat-poet Attenborough’: meet Ogmios, the mysterious star of the BBC’s best new comedy | Television | The Guardian It is glorious! Has great relevance to this thread with his take on Scooterboys but, really, has much deeper resonance about the approach to travelling by road in the urban environment. Flow

Ogmios also has a non-agressive horn installed which is cool.

Just got back from a few days in New York, where there’s far more ‘beep, beep!’ than here but, oddly, the driving is far more considerate and cautious.

I found that as well. They also have that right hand turn thing where they can go right through a red light, but if a pesdestrian is there / crossing, they have priority.

the driving is far more considerate and cautious.

They have a sensible speed limit in cities of 25 MPH, and they also have law enforcement.

And an awful lot of litigation and compensation claims.

Yes, the law enforcement makes a big difference – loads of traffic cops in the US. Mind you, American drivers I know seem to take speeding tickets in their stride. I think unless there’s dangerous driving etc involved, there are no repercussions with your licence.

In the town where I lived in Connecticut (largely filled with hedge fund managers and bankers) you could ‘donate’ $100k to the town Police Pension Fund and they’d give you a special sticker for your car that gave you a free pass - literally a get out of jail free card - in case you got pulled over for speeding or drink driving.

'donate’ $100k to the town Police Pension Fund and they’d give you a special sticker for your car that gave you a free pass - literally a get out of jail free card - in case you got pulled over for speeding or drink driving.

That’s disgraceful.
In Britain that sort of donation to the party of government would get you a knighthood or seat in the lords - much better value for money.