It’s hard to miss these signs everywhere down at Bell Green, where all the junctions have been re-surfaced and painted: 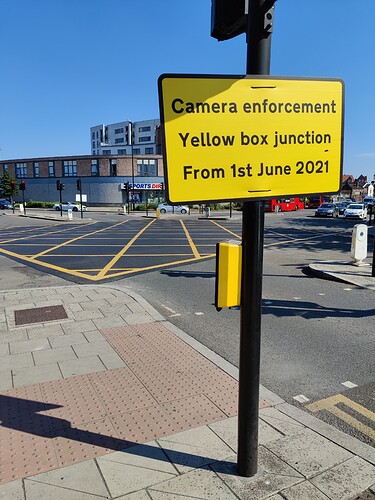 There’s a lot of traffic down there, but I wasn’t aware that the junctions were routinely getting gridlocked to demand cameras on every junction!

Same at the Mayow Road and Sydenham Road junction

Yes I’m not aware of congestion in the Bell Green box being a big problem. Drivers accelerating through the lights after they turn red is frequent and maybe cameras can pick that up.

The box at Mayow / Sydenham road is frequently blocked by drivers entering without sight of an exit.

Cameras to enforce speed limits in the area would be welcome too.

It’s also all the junctions around Bell Green they seem to be doing.

Perhaps they got a bulk discount on the cameras?

What does ‘camera enforcement’ mean in these places though. Are they just to monitor yellow box behaviour and fine non complying road users? Or will they be used to identify other offences- like red light jumping.

not an obvious priority for mass camera installation but I’d think keeping yellow boxes clear is for traffic flow reasons but in particular emergency vehicle flow.

What they’ve done is closed a load of the side roads feeding Sydenham Road, forcing everyone on to the roads with traffic lights or roundabouts like Mayow road. The traffic has since been backing back on these roads (as a side note we are now we are getting pollution hotspots on these roads!), so my guess is they are changing the phasing of all the traffic lights reduce the build up on the feeder roads to Sydenham Road, meaning there’s more likely to be a build up of traffic on Sydenham Road itself. Maybe I’m just being cynical but I wouldn’t be surprised if at some point, Sydenham Road becomes much heavier with traffic, meaning the box junctions are more in use. It will be slow though as it’s half term now, then only a few weeks until the summer terms. So you may not notice until September/October.

At Bell Green, if you’re turning right at Sports Direct into the retail park, you have to pull forward when the lights are green in the hope of getting a gap in the oncoming traffic in order to turn right into the park before the lights turn red again. Quite often I’ve been caught because the driver in front of me dithers about or oncoming traffic jumps the lights.

And on Sydenham Road heading in the high street direction you can get caught at the Mayow Road junction if the car in front of you stops to let a couple of cars exit from Girton Road.

If you don’t drive forward, some drivers behind you get apoplectic with rage because they never look beyond the bumper of the car directly ahead.

if you’re turning right at Sports Direct into the retail park, you have to pull forward when the lights are green in the hope of getting a gap in the oncoming traffic in order to turn right into the park before the lights turn red again.

Yep - the busses do this too.

The other one is turning left out of Worsley bridge road when traffic is backed up under the bridge. Those lights are on a very short timer and, when busy, unless you pull into the yellow box, you can’t get out! There actually doesn’t need to be a yellow box right there as turning left blocks nothing

Perhaps they will re-time the lights to fix these issues

You are allowed to stop in a yellow box if you are turning right and only prevented from doing so by oncoming traffic or other vehicles also turning right.

Good to know John. Thank you. But you can get caught up there if the lights turn red and I bet Lewisham would try to charge you.

Is there a yellow box in Penge now? Or is Bromley more understanding of motorists? It’s hard not to get caught out there when turning right off the high street bu the old police station, into that road that heads up to Aldi.

True - I guess that’s what the bus normally does & there’s a good explanation of the rules here: