I’m well known for outlining my ongoing frustration with the lack of year on year park improvements in my closest, mid sized park - Blythe Hill Fields.

I walked in the Fields this morning [Sunday, 3rd November 2019] from the Montacute Road entrance.
As usual, the view out of the Fields was marvellous, but nothing within the park appears to have altered in 2019.

I walked over to the Park Noticeboard by the entrance with Blythe Hill Lane and the general information found there was minimal.

The Fields has a flourish of activity for its 5 hour per year, July Festival - no doubt about it.

However, both before and after this singular, park event, I have witnessed, year on year, a lack of reasonable park improvements to keep pace with parks of a similar size in the London Borough of Lewisham and I fear that the same will play out during 2020 with the annual July Festival taking an unreasonable priority over every other park user concern for the remaining 364 days in the year.

I am the ongoing Chair of Ravensbourne Park Gardens, SE6 [situated 200 metres from Blythe Hill Fields] and love both of these local green spaces.

The Friends of Blythe Hill Fields might be a good place to contribute your energy and ideas? It looks from their meeting minutes as though they welcome input and are very active in maintaining and planning improvements to this excellent space, working with LB Lewisham. https://www.blythehillfields.org.uk/the-friends

I tried that route in 2014/2015 without success.
I do monitor the Friends’ website on a regular basis. The last post on its ‘News’ section was a post relating to the raffle from its July 2019 Festival, which appears to back up my ongoing concerns.

FOBHF look engaged and active from their website - posted minutes of 7 meetings in 2019, last one in Sept and development of the park and the kind of stuff in yr original post is what they do.

What kind of improvements are you looking for?

Surely keeping a park as it is, a green open space that everyone can enjoy is the best use of it in a built up area, doesn’t need any improvement.

Agree with @Nivag, although it’s commendable that local groups do things like this: 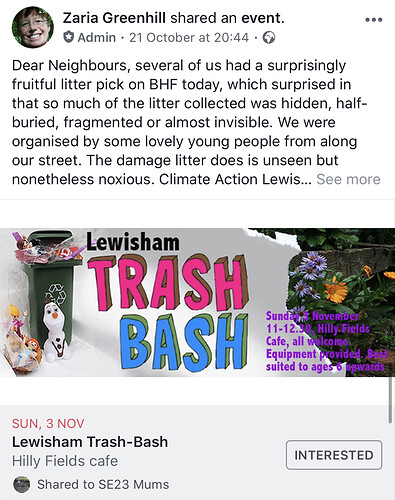 @Austen_Jones if you’re looking to help out, perhaps join the next litter pick?

Park signage replacement. The volunteer Friends group held a park survey on what park improvements they wanted at their July 2017 Festival. The majority vote went in favour of replacing the park signage and yet it hasn’t been delivered over 2 years’ on.
I’d like to see the concrete fence panelled entrance leading into the park from Montacute Road painted over with a green colour or with a mural [that was the 2nd favourite park improvement from the 2017 survey].
And, I’d like to see Spring bulb planting around all 4 entrances and about 3 picnic benches instated on the slope overlooking towards the City.

The event was not advertised to my knowledge. Certainly not on the Friends’ website and the advert you have uploaded refers to Hilly Fields, not Blythe Hill Fields. Picking up litter is very useful, but not the sort of ongoing park improvement I was referring to.

I agree. That’s why all of the park improvements I would like to see in the park relate to low impact uplifts like new park signage, painting the grey concrete panelled fencing leading in from Montacute Road, instating 3 new picnic benches for people to enjoy the view with a table to eat/drink from and Spring bulb planting around each of the 4 entrances, for example.

Right, so cosmetic changes. I thought you were referring to things more substantial. It’s a great space; spent many hours up there when I lived on Blythe Hill Lane back in the late 80s. Hasn’t really changed, thankfully.

I take it that you support the low impact changes I have suggested.

Absolutely, Austen. That Montacute entrance is a bit on the drab side and picnic benches would be ideal, but would, I fear, be subject to vandalism. Spring flowers are always welcome. As the name suggests, it’s a field as opposed to a park, so should ideally be left as is without too many features. Having said that, the introduction of exercise equipment around the perimeter was a nice touch and not overly intrusive.

Good comment - I am fully onboard with keeping ongoing park improvements as not overly intrusive.
If new park signage and the painting of the concrete fencing leading in from Montacute Road could be the firm priority objective for delivery in 2020, then I would be a happy chappy.
The last thing I want to see in 2020 is a July Festival lasting 5 hours without a park improvement ‘legacy’ objective.
As such, any potential Festival business sponsors in 2020 should be more in tune with providing their financial support for the Festival and to link their support to a specific park improvement objective following on from the Festival.

Beyond belief in my view - the Friends’ of Blythe Hill Fields held its AGM on 29th October 2019 at the Blythe Hill Tavern and agreed to amend its Constitution in relation to its own Equal Opportunities Policy in order to allow its own Committee to ‘vet’ any park user wanting to engage with park decision making!
The meeting was attended by Peter Maynard [Lewisham Council’s Greenscene Manager] and Glendale’s management [Lewisham’s ongoing PFI parks contractor]
Suzanne is the ongoing Secretary for the park volunteer group.

As such, London Borough of Lewisham appear to have permitted a volunteer park user group to effectively ‘vet’ Blythe Hill Fields’ park users who want to have a legitimate say in our local park.

London Borough of Lewisham should act with immediate effect to overturn this blatant attempt by the Friends’ of Blythe Hill Fields to re-write its own, reasonable Equal Opportunities Policy.

“Suzanne reminded all that a recommendation had preciously been made to amend the Friends of Blythe Hill
Fields Equal Opportunities Policy but that formal acceptance of the change was needed. Those present
agreed to the insertion of “Subject to the Committee’s discretion” in the fourth paragraph.
ACTION: Suzanne to amend policy and request upload to the website.”

“Subject to the Committee’s discretion”

To me at least, it seems quite a reasonable thing to have, and not uncommon in such organisational structures. Building an effective team with shared goals and values is difficult, and if we assume Friends of Blythe Hill Fields have done that, it’s reasonable to grant them some control to protect the group and keep trouble makers out.

The full minutes of the AGM are neatly written up and published on their site: https://www.blythehillfields.org.uk/minutes. It’s clear a lot of effort goes in to their work, and out of it all, I myself wouldn’t have chosen to highlight that one particular decision. Of course, I may not agree with absolutely everything they choose, but as we say, be agreeable even when disagreeing.

I would like to see new signage maybe better lighting and security like most nice places. Everyone should feel extra save and enjoy wherever they go. The park itself had some amazing views. Maybe some flower beds or something and kids area. So proud of our area so many positives x