I’m getting a bit miffed with the performance of BT Infinity. I sometimes clock a consistent 70Mbps in speed tests but at other times (especially in the evenings when everyone’s watching Netflix) this can get patchy and there’s often high latency.

Has anyone tried Relish? I get pretty good 4G coverage in Ebsworth Street and I wonder if Relish could match the speeds and save me a bit of cash (avoiding paying BT line rental for a landline I don’t use).

Speedy broadband in HOP: will it ever happen?
Broadband suggestion
Londondrz June 9, 2016, 6:27pm #2

@anon5422159 Count yourself lucky. Just spent over an hour on the phone to Sky and I now get a whopping 16 mbps

Wireless affected by lots of stuff like rain, sunspots, and underlying capacity is limited, as it gets overloaded it’s never going to get any better.

Have to say had a bad experience with Virgin, so switched to BT who never upgraded our bit of the road, so switched back and now Virgin are not bad and I get pretty consistent 60Mb (though < 3mb upload)

Unfortunately, Relish only cover central London. Before I moved to Forest Hill (previously in Herne Hill) I was with BT Infinity and had no complaints about the service. We are now with Virgin here in FH and, I must say, I am incredibly pleased with their internet (TV not so much)… I get very close to the 200 mbps promised, even wirelessly. The reach of the signal is fantastic… the router is on the ground floor… bedroom two floors up and we get 60 - 70 mbps up there without any extenders etc. Have only ever had to reboot the router once in 3 months…

@Bolgerp are you using fiber? B

@Bo Thanks, may have to look into that.

They had a really good bundle deal when we were looking for services in advance of moving in. Plus, the previous owners had Virgin as well so we didn’t need to get anything installed or book and engineer visit… they just sent us the kit and we self installed. Basically we got their highest TV package and max fibre internet for half price for 6 months… even with the phone line rental added on and after the 6 months half price is up, it is still cheaper than what I was paying Sky just for their tv service previously.

So, I would advise to have a look at Virgin. They don’t cover the entire region for superfast broadband, however. And, as I mentioned, I am not too keen on their TV offering… their TiVo box and software is extremely clunky and slow. So, I suspect I will move back to Sky once my 12 months contract is up for TV but will keep Virgin’s internet…

We moved from Whatman Road (BT Infinity) to Colfe Road (both BT and Virgin available) last year. BT were rubbish in handling the house move - which they blamed on the Infinity fibre service being “new”. So we switched to Virgin - who didn’t need to send an engineer out and were going to be able to set us up in 3 days rather than minimum 3 weeks. Generally the service has been fine. We’ve had a couple of outages which they’ve admitted and fixed with good clear updates along the way.

I suspect that for @anon5422159 the choice is limited to using BT Openreach lines or something like Relish. Would it be worth looking at another provider using the Openreach lines for better service?

Middle of the day, on laptop, using wifi, 1 floor below the router 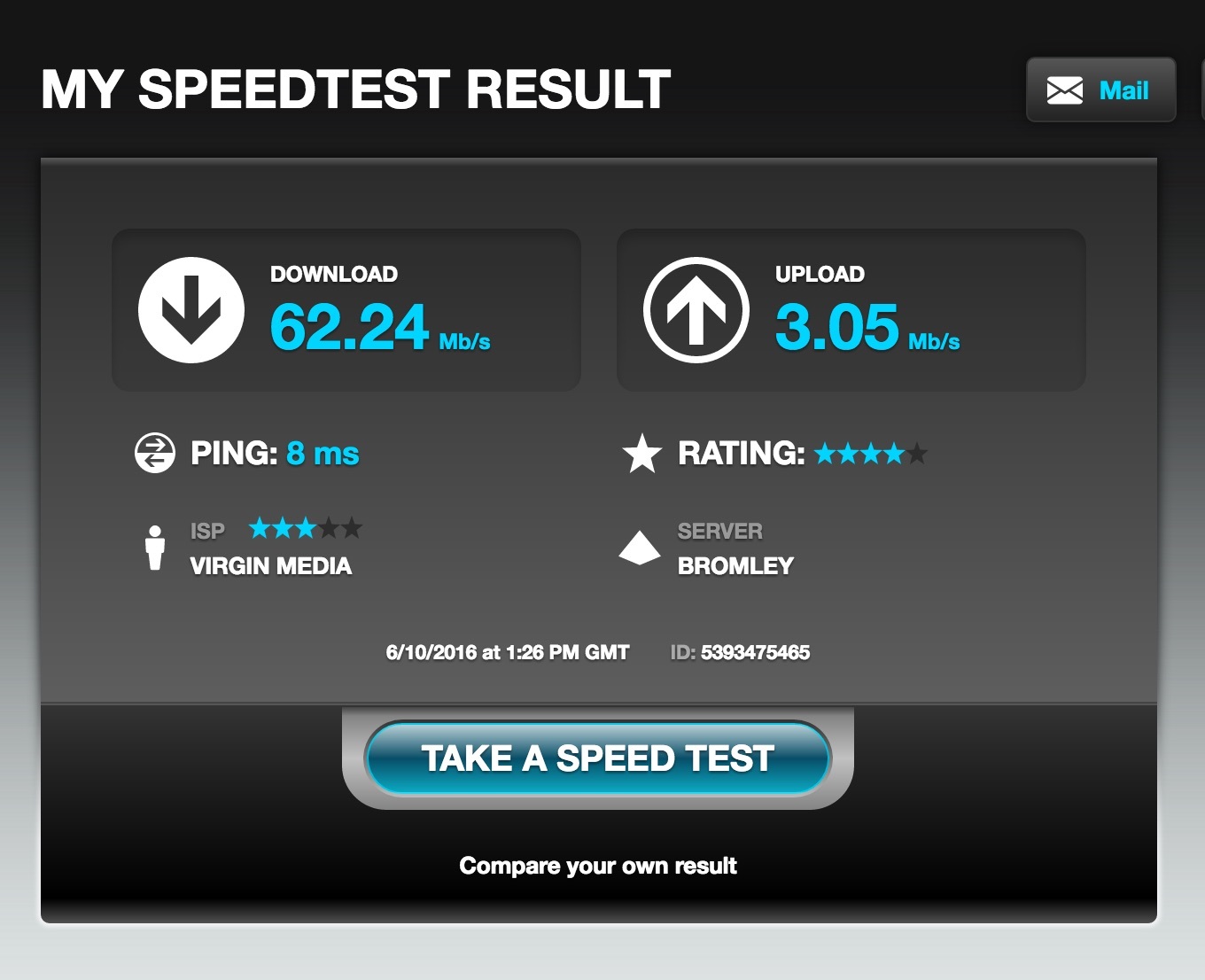 Whether or not you get good speeds from Virgin is a bit pot luck, and if you are unlucky enough to be in an oversubscribed area, you can whistle for any sort of fix. We had speed under 5mbps (yes, 5) in the evenings for months. They wouldn’t even contemplate looking into it until overage in my area was 10% over capacity. It was standing at 4%. If an infrastructure upgrade WAS approved, it would take up to a year. I had to bombard their Twitter account for weeks to get them to let me out of my contract.

The TV service is exorable. Interface ugly, laggy and unintuitive. Catch up services accessed through opaque layers of menues and fiddly search boxes, then ten minutes to just load something like iPlayer, even when broadband speed was solid.

We’ve gone to Sky. Their new Q TV boxes are a delight. I can’t tell you how nice it is. Just a pleasure to use.

We have their broadband too. Solid speeds of 32-36mbps. After years on BT superfast Infinity we thought it would be too slow, but even in a house with 5 heavy users it is more than enough.

One of the risks of using BT is that they use their own BT Wholesale product which is shared with other ISP’s.

TalkTalk and Sky have their own service, only using the last bit of the Openzone connection to your house from the exchange, so you are less likely to get a reduction in speed and latency.

I’ve been with TalkTalk for two years and always had the same speed, even during the busy evenings.

I was with BT for a couple of years, and was very happy with them. I got the 60 Mbps that my connection allows, consistently and without problem. I switched to Zen only because I intensely dislike BT as a company, and wanted to give my business to another company. I’ve been very happy with Zen, and pay exactly the same as I did to BT, but it’s also no better or worse (I still get the same speeds).

I agree with the Zen observation. What is very frustrating is that the Forest Hill exchange is enabled for FTTP and though I have neighbours who have it, it seems that it is impossible to get now as they have run out of space in the cabinets. Grr.

I would love to get FTTP!

So we don’t have fibre as an option and it doesn’t look like there will be for quite some time. Has anyone tried the 4G broadband from the likes of three mobile (homefi) or vodafone? They look pretty decent and was wondering if it’s better download/upload speeds. 100gb with vodafone looks a good deal at 19quid…no more landline costs. The 4G reception looks pretty good too in the HOP area.

Hi @Hikoki. I have moved your question into the existing topic we had for this.

HI. It’s not really a fibre question though. It’s standard ADSL vs 4G

This existing topic does discuss cell network broadband (e.g. Relish), but I’ll alter the title to broaden it to ADSL