I’ve noticed quite a few more cyclists than normal cycling the wrong way up the one-way section of Brockley Rise.

Today I noticed on the pavement at the top of the road where it joins Stansted Road near St Hilda’s church that there is a small cycle path in the direction towards the one way system, and further down there is a cycle sign facing the wrong way car traffic wise.

How do you know if this and other roads are permitted to cycle the wrong way down does anyone know? 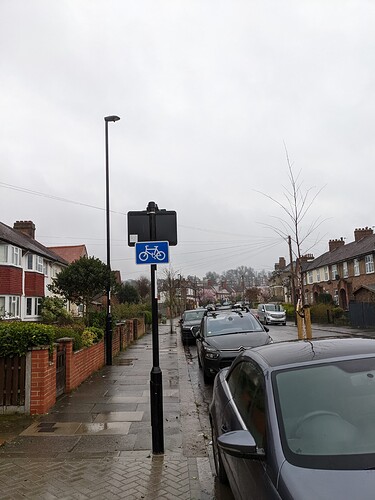 Isn’t that odd. Usually a round sign means it’s a cycle path or shared path (if it has pedestrians on it too) i.e cycle on the pavement, but this one means ‘Recommended route for pedal cycles’ so that would imply on the road. Normally if you have a one way street with a reverse bike lane then it’s clearly marked with paint and bike icons on the road.

I’ll have to go and check this out later to see if anyone yells at me about ‘road tax’ or any similar kind of nonsense. Or rather to check if it’s even safe or not - would you expect a bike to be coming the wrong way - I wonder if there’s any indication for motorists at the top end that it might be the case there will be oncoming bikes?

Yes it’s strange. They put a new pedestrian island in the main road, and when you use that to get to Brockley Rise it now has a bike lane on the pavement, but only for a few metres until it gets to the road and is marked ‘end’.

I did wonder if maybe the first bit is completed and they have not done the road bit yet (it’s a quiet road and would be perfect for cycling up instead of using the main road, and it leads to a primary school so even better.

I suspect you might embarrass me with something obvious later however! 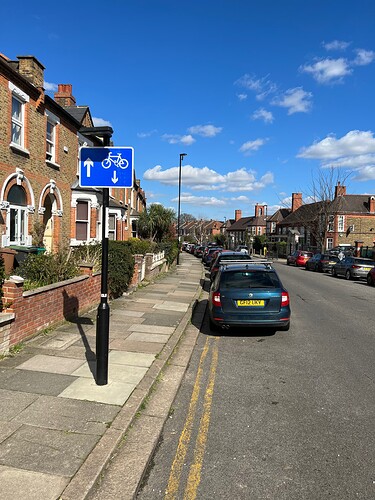 I had a look. The cycle lane on the pavement spills into the road and there are bike stencils on the left as you go against the one way. So you are supposed to cycle up it and it’s much nicer than The main B218 whatever it’s called. Good tip.

Oh and the sign at the top shows it’s open to oncoming bikes so there is a warning which is good.

It feels safe and plenty wide enough to cycle against traffic along that part of the road, but it’s really unclear what you’re supposed to do when you reach the island by junction to stillness road.

That said, I haven’t taken that route in a few weeks, has there been recent roadworks?