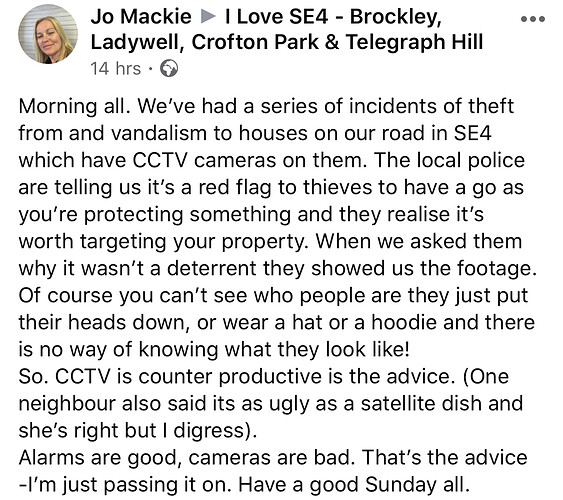 What do you think?

Given the price of some of the cameras (and subscriptions needed to run many of them), I guess CCTV may well be a cue to criminals that the owners have nice things, but it feels a bit like victim blaming for law enforcement to be pointing this out - even if it is true.

It also counters their own advice elsewhere:

Hidden CCTV in the house is still a good idea. Burglars may well let their guard down once inside a property and remove face coverings. 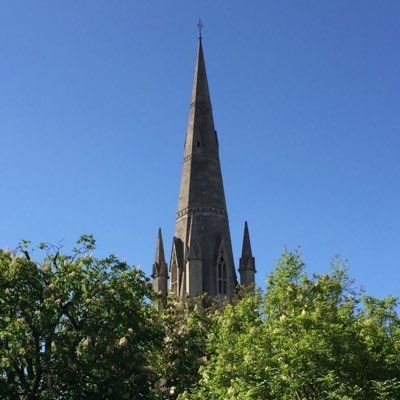 If more people have cctv those people with hoods up are walking around. A cctv trail could lead to footage of them with their hoods down and face uncovered .
2 Likes
blushingsnail January 27, 2020, 5:23pm #5

Interesting point. I was considering having CCTV installed but now I don’t think I will!

As for MPS Perry Vale’s comment about a CCTV trail, well yes, nearby cameras may well pick up the burglars without their hoods up. But the police don’t have the resources to go round checking, do they? It will only work if the burglary victim approaches nearby CCTV owners with a picture and date/time details of the burglary and asks the CCTV owners to check their footage.

@MichaelSnasdell This is a new one on us here at Perry vale. We have caught quite a few criminals with the use of cctv. Maybe a rumour started by a criminal ?

In Camberwell I had the misfortune of being burgled three times over 13 years. In all circumstances the police looked for CCTV which might cover the area and sought to obtain footage.

I much happier to stick with the published advice of the police and the response of our local MPS on this matter.

Sorry I know this is going a bit off topic, but a couple of years back a car smashed into the side of mine when they were attempting to overtake me on the busy run up to Sydenham high street. They were really speeding but I got the reg number and phoned the police right away as they zoomed off without stopping through a red pedestrian crossing light. A local trader stepped forward as a witness and he had CCTV that showed the whole thing I believe there was also traffic camera CCTV. We also had the bits of the other car that had been left in the road.

Eventually - after a lot of work on my part - the police spoke to the keeper of the other car who refused to say who was driving. They charged the keeper. I had a letter with the court details and was relieved that the police said I didn’t have to attend.

Trouble was the police didn’t attend either. So the reckless driver got away with it. I’ve seen the car roaring around our streets since.

I’m truly sorry to feel like this, but recent experiences with the police responses to catalytic converter theft and a fracas in Tesco when I asked (what turned out to be a scarily aggressive) member of staff if he would put out an announcement asking people to turn their engines off when they were in the store doesn’t fill me with confidence either.

If more people have cctv those people with hoods up are walking around. A cctv trail could lead to footage

I thought your camera only records when it detects movement in your detection zone, as opposed to recording the street 24/7?

I don’t think so, CCTV in public places is 24/7. Having it on a motion detection in a busy area would be counterproductive.

I think that police post might be referring to commercial, Local Authority and Police camera coverage. If you have a domestic set up you are subject to GDPR if you capture images of people beyond the curtilage of your own property (that includes overshooting into your neighbour’s property). You can record beyond your own curtilage, but you’re supposed put up a sign saying you’re doing so and to follow GDPR procedures.

Some of the rules seem a bit OTT but if you had a horrid neighbour filming you in your garden I guess you’d be glad of the protection.