Ward panel members have been invited to take part in “Lewisham Community Road Watch Scheme” an initiative with TFL & the police designed to address community concerns over speeding.

This would mean we would join a Safer Transport Police community Support officer & use the speed guns to check the speed of vehicles.

We at Forest Hill SNT have over the years received a great many complaints concerning speeding motorists on various roads within the ward. I am writing to you now as there is an opportunity for you to take part in a new initiative, the Lewisham Community Road Watch scheme that I feel you may wish to participate. This is a joint initiative between Transport for London and the Metropolitan Police Service that has been designed to address community concerns over speeding.

All details should you require further information or wish to participate are contained within the attached letter;

From the pdf letter:

A Police Officer cannot be present as they would be expected to stop the vehicles and report offences at the scene.

Michael is the only SNT officer around here. Not his fault and not something he enjoys. Give the poor bloke a break.

Mick’s not the only one John, we have a couple of others too.

But completely agree with you, give them a break they do an amazing job AND have to cover a massive area.

They hardly ever get time to go to the loo never mind a proper lunch break!

I for one thoroughly take my hat off to them & appreciate all the work they do.

Chris, I’ll forward you the email & can you please post from the attached letter “How it works” & the following paragraph please. I tried to copy & paste it but couldn’t.

This will give more info on how this scheme will work & I think it’s a brilliant initiative from our police & TFL.

ETA Chris I’ve sent this to your personal email

Doh! @Andy you posted it already

Sadly Pauline I think no more. I am sure Mick can confirm at some stage.

I got this when trying to email the police: 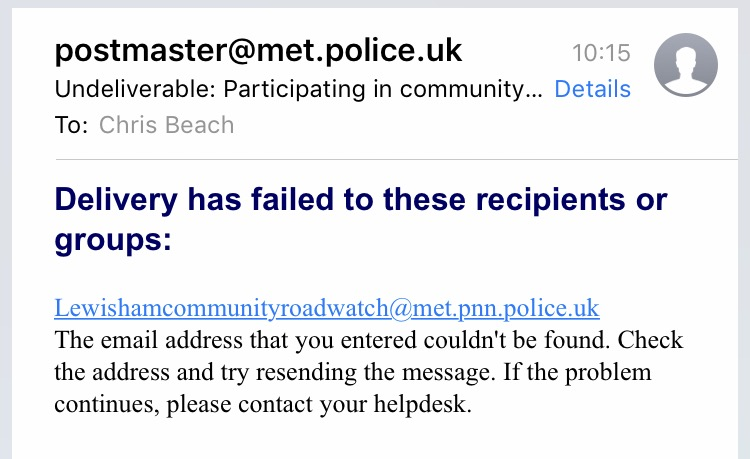 A Police Officer cannot be present as they would be expected to stop the vehicles and report offences at the scene.

I don’t quite understand the rules but the way I understand it Police Community Support Officers have been given powers to issue tickets for traffic violations (including parking, one way violations, etc) without the need to formally stop and charge the ‘suspect’. Until very recently PCSOs did not have some of these powers. Police officers still do not have these powers and they would have to formally stop somebody suspected of such actions (and formally report a criminal offence).

This is why the letter says PCSOs will be present but Police Officers would not be present.

If I had been caught speeding whilst driving and had received a letter from the police to that effect, I would immediately dread the consequences: penalty points, fine, speed awareness course, increase in insurance premium, etc. If I then read on to see that there would be no consequences, I would feel elation not remorse.

I think that we could agree that the desired outcome is to reduce speeding in the borough. I doubt that these speed checks will provide a lasting behavioural change for the people caught speeding. If anything, I think that it reinforces the line of thinking that speeding isn’t a serious offence and that the police share this viewpoint.

@Londondrz, this is not a reflection on the good work of “the only SNT officer around here”, but of this policy more broadly, but free free to interpret it however you wish.

However, receiving a warning letter from a local police officer, after being clocked by my local community might feel more personal than an automated DVLA notification.

I think the key point here is to educate drivers and show the human and local aspect of it i.e. speeding jeopardises your neighbours’ lives.

I’d like the Police to pursue this method to see if it reduces speeding. Who knows, it may work better than the static cameras and speed limit signs. We won’t know until we’ve got the evidence empirically.

I think that depends how many warning letters you get before you start to get points or re-education. I assume that warnings are kept on record by the police and shared with other forces, but I could be wrong.

The letters are sent to the registered keeper, who is not asked to report whomever was driving the vehicle at the time. As such, I doubt that there can be any consequential action in the future as a result of the the letter. It would, in fact, be unfair for the letter to have any future legal effect, in my opinion.

Sorry @Andy, the tone of your post suggested policing and the speed checks are local so I put two and two together and got five. My bad.

I think that we can all work together here to enable the speed checks to have a meaningful and lasting impact on the drivers.

@Londondrz, you do the speed check down the road and give me a wave if the driver is speeding. I, situated farther up the road in between parked cars, roll a football out in front of the speeding car. The driver will likely expect a child to follow causing immediate panic, braking and the realisation that speed can kill. N.B. I suggest that none of us park our cars around where I will be rolling the football out, unless you’re looking for a new one.

@Londondrz, you do the speed check down the road and give me a wave if the driver is speeding. I, situated farther up the road in between parked cars, roll a football out in front of the speeding car. The driver will likely expect a child to follow causing immediate panic, braking and the realisation that speed can kill. N.B. I suggest that none of us park our cars around where I will be rolling the football out, unless you’re looking for a new one.

Dont think this has not crossed my mind already. Turning up from Waldenshaw onto Manor Mount is fun with a car coming the wrong way, lots of brake smoke, hooting and finger waving by the drivers coming the wrong way down the road. Me smiling at them.

The same when I leave my house and stick to the 20 limit with some idiot 5 inches off my bumper bouncing about like a caged tiger because I DARE to do the speed limit.

Can we not have a speed check and anyone over 30 mph gets an RPG through the bonnet?

The problems with the email mailbox have now been resolved, and you can contact the police on the following address in order to take part in the scheme:

The details I received (with permission to share on SE23.life):

If you are interested, email the following details to the above address and they will be in touch when running a session nearby:

The main objective of the scheme is to reduce the speed of vehicles in a location which either has a history of collisions, or where a community concern has been raised. Monthly the Lewisham Safer Transport will send via email, dates, locations and times of up and coming events. Volunteers can choose a date that suits them and reply with a confirmation. Please note that volunteers are not obliged to stay for the duration of the session and they can leave at any time. Sessions last 1-2 hours. The scheme is open to anyone over 18

What is the volunteer role during this Community Roadwatch event?

Volunteer’s will stand on the pavement enabling motorists to see them from a distance away. They will use the equipment to monitor the speed of passing vehicles, and will note down the details of those exceeding the guidelines. Volunteers will be accompanied by a Police Community Support Officer throughout the session.

On the event day

Volunteers will be asked to sign a disclaimer before starting the event. Police will then supply them with a fluorescent jacket. The officers will then go through the process with them. At the event volunteers will be shown how to use the speed gun and what details of the vehicles need to be recorded on the record sheet.

What happens after the event

Police will send the offender vehicle details to the RoadSafe London Team who will then send a warning letter to the registered keeper. In an event where by an offender has been picked up more than twice no further letters will be sent and they will be considered for targeted enforcement.

Regarding the limits being enforced:

The speeds that we work to are the NPCC guidelines approx. 10% + 2mph over the limit – the same as speed cameras are set at.

The scheme was set up by TFL in partnership with the police and these are the rules of the scheme which we are bound by if we run the scheme. The drivers identified as part of the scheme receive a warning letter so they aren’t prosecuted due to evidential requirements.