(Sorry to be a forum ranter but…)

Every time I use the bridge on foot the damage this is doing looks and feels worse and it would be such a shame if it were to get to the point of having to close for safety issues (and goodness knows how long it would take to be repaired).

So if you’re a cyclist using Waterlink Way PLEASE dismount when crossing.

So you think cyclists should dismount in order to protect the bridge?.. if it is true that cycling over it can damage it then the signs should probably say so. I suspect many cyclists will think they are told to dismount in order to prevent collisions, but since they may be able to see it is clear of others may not follow the instruction.

I must admit that when I walked over it the other day it did seem very ‘spongy’ at one point!

I took the cycle signs as more of a public liability limitation thing though - any cyclists hurt or injuring themselves or others on the bridge are responsible themselves, rather than there being any possibility of liability to the land owner.

Still, it seems absurd that the Waterlink Way, part of the National Cycle Network, should feature such a non-cycleable bridge. Perhaps if it is weak, it can be repaired and upgraded to be suitable for pedestrians and cyclists. 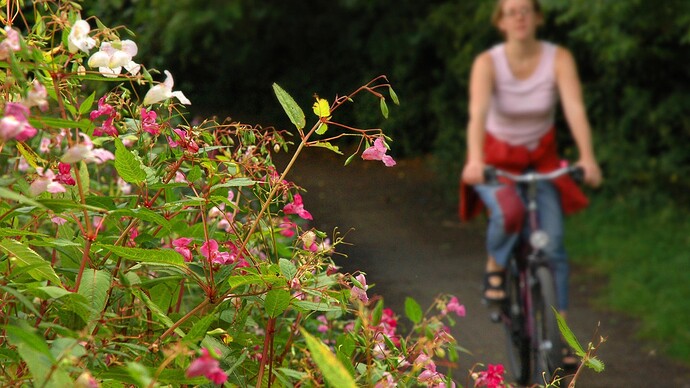 The Waterlink Way is a 6.2-mile route on the National Cycle Network, connecting a number of parks and green spaces in South East London to Greenwich.

Yes… When cyclists go over at speeds you can quite literally see parts of the bridge shaking. In the same way that some road bridges have weak bridge signs - the extra weight and force going down onto the bridge is going to do damage.

The pedestrian safety is also a big issue there - and not just at the bridge. The speeds people go along the path generally - quite a few near misses.

I’m not sure that’s a given unless there are poorly selected or fitted surfacing materials.

Still, it seems absurd that the Waterlink Way, part of the National Cycle Network, should feature such a non-cycleable bridge

Even more absurd would be for it to feature a bridge which is unable to sustain people (ignoring the signs and) cycling over it.

I have to admit I am one of the 95% that doesn’t dismount. That’s because 95% of the time there is no pedestrian to inconvenience.

Of course one shouldn’t need to be told that when they should take precedence when present. Given that a dismounted cyclist takes more space then mounted the best way of honoring this is pausing and allowing the pedestrian to complete the crossing.

There is the issue of speed. The sides are quite steep and it is narrow. Hence the safest way to maintain control is to approach it with sufficient momentum to reach the top.

I hadn’t considered the structural integrity of the bridge. From its shape I doubt this is at issue. The surface certainly is. Rather than suggesting deliberate obstruction of one bridge user by another would 't it be better to campaign together for some repairs?

It is a vital and only off-road route to Catford for both pedestrians and cyclists. Surely we should be looking to expand and remove restrictions to its use by all.

I agree it is vital and we need it there permanently. But you only have to stop and take a look at the bridge to see it isn’t in the best shape. There are nails coming out, patch-up jobs with odd bits of wood, the path itself is cracked and moves considerably in places.

The original signs have long been there - if it’s purely about protecting themselves with regards to liability for collisions I would assume they would have been enough. The fact that more and more signs are added to hammer the point home (the spray painting on the path only in the last few weeks) would suggest to me it’s something more.

I agree, maybe I’ll send sustrans an email to see what they say about the bridge (and to look into the possibility of signage/legality of asking dogs to be kept on leads down there too).

Now I can join you on a rant about long/extendable dog leads. When the owner goes one way and the dog another you get the perfect trip wire. Better no lead in this case.

Last year there was a question about the bridge replacement in the Full Council Public Q&A (July meeting I think). @SophieDavis supplied the answer obo the Council.

Which is fine if your dog is well trained and comes back on call.

I’ve seen ducks with ducklings being chased by dogs down there and there’s not only the trauma it will cause them/risk of mother ducks flying off and leaving the young but the risk of a dog seeing one as a squeaky toy and causing injury/death is very worrying.

I must admit, I find your rant exhausting. If the bridge was weak, a sign would suggest it. The cyclist dismount signs are obviously there to avoid collisions with pedestrians and pedestrians should get priority. I go through the Waterlink Way regularly both as a pedestrian and cyclist and I really never see issues (more so as a pedestrian). People understand how to traverse a bridge.

I will concede the bridge could be updated. I believe last year something baffling was done to the surface that made it uneven and appear worse off.

I also use the bridge regularly and can see and feel the deterioration of it, sign or no sign.

Clearly people do not know how to traverse a bridge properly - the times I’ve seen a cyclist give priority to people on foot is minimal.

Last year there was a question about the bridge replacement in the Full Council Public Q&A (July meeting I think). @SophieDavis supplied the answer obo the Council.

I found this one:

PUBLIC QUESTION NO. 2
Priority 1
Question asked by: Tim Collingridge
Relevant Directorate: Housing, Regeneration & Public Realm
Member to reply: Councillor Sophie McGeevor
Question
Can the Council confirm that funding for replacement of the Waterlink Way wooden
bridge at Pool River Liner Park will be/has been requested in the 2021-22 LIP
settlement, what the estimated cost will be (from the previous tendering exercise)
and when the new bridge is scheduled to be installed?
Reply
Funding for the replacement of the Waterlink Way wooden bridge at Pool River
Linear Park has been requested as part of the Council’s submission to TfL for
2021/22 Local Implementation Plan (LIP) funding. The timing of replacing this bridge
will be dependent on funding being confirmed and what that funding allocation is.
As a result of the pandemic, there have been delays to the process of replacing the
bridge.

However the backlog and current impasse between DoT and TfL doesn’t make me feel optimistic. Do we know the estimated cost? What other funding alternatives might there be if the submission fails?

I have no idea… I just googled the question for the benefit of the thread.

Sorry Beige - I was hoping for some response from ward councillors or civic societies FHSoc & SydSoc whose residents use this facility.

Waterlink Way is the one of the very few treasures Lewisham has in pleasant and sustainable travel.

Yes that’s the one. I was hoping @SophieDavis could supply more info now. The cyclists dismount signs must surely have been provided by someone in authority.

@StuartG I’m pretty sure these are neither SydSoc nor FHSoc signs.

PS Oops sorry @SophieDavis I see it was Sophie McGeevor who replied. So I guess any follow up down to her? Or Patrick Codd?

The point I was making was that surely the transport committees of both societies would have been involved, consulted or should be championing the upgrading of this vital transport link. Hence could provide answers too.

As a member (of SydSoc, as more local to you I assume rather than FHSoc?) have you raised it with them? They may not even be aware of the issue if no one’s raised it with them. Whereas the local authority definately knows about the issues, as do cycling groups as Google reveals (i just did a quick search).

No,since I was unaware of this planned upgrade until @Beige posted it here an hour ago. SydSoc was featuring Waterlink Way heavily as part of there Bell Green proposals and hence ought to be in the picture.

If you are a member you may be in a better position than I to find out SydSoc’s knowledge, involvement and ambition for this proposal.