A number of residents of Stanstead and Rojack Roads are upset that Lewisham Council appear to have taken quite an underhanded approach in the way in which they approached publication of a notice and opening of a consultation period for the Disposal of open space land 30-32 Stanstead Road for the building of 4 * 1 bedroom flats.

Residents of the local area had been contacting Lewisham Council to try to find out where the notice was published. Numerous attempts had been made of various departments within Lewisham Council with no luck - people were directed to departments that were unable to help and no responses were received to communications sent.

The notice was eventually located by the residents albeit too late and after the consultation period had closed. A single public notice was published on the 4th April in the smallest circulating local newspaper The South London Press, which services the whole of South London (please note that this is not a free paper).

We have seen an artist’s impression of the flats which we strongly believe is not in keeping with the local area. We believe that the loss of the space will be a loss to our area. It will generate a huge amount of traffic on two roads, one of which is a no through road. The Montesorri and families doing drop-offs and pickups at the nursery will be adversely affected by the volume of traffic that the building of these flats will generate.

We think that it’s only right and fair that the Council re-open the consultation period for the disposal of this land considering the underhanded way in which the initial notice was published. The council states on its own website that it publishes public notices in the News Shopper (the largest circulating local newspaper) - this did not happen, however. Neither was it published on their website as per other previous unrelated notices.

Is it this area of grass?

If so, another underhanded grab of green space by a local council.

Yep, that’s the one, Chris

Is there an updated application reference for this? Can only find this on the planning portal which is outline application and seemingly expired anyway:
http://planning.lewisham.gov.uk/online-applications/applicationDetails.do?activeTab=summary&keyVal=_LEWIS_DCAPR_18066

Also claims to be in SE26 though.

We are referring to site in SE23. Not sure what this link relates to. There is nothing on their website relating to this. All notices on Lewisham’s website dating back to October 2016 have been checked. See the following link -

I gather this original consultation revolved around the use of open space. The development still requires planning consent and those wishing to object will have a chance then too sometime around late summer.

Here’s your guy if you want to take this up sooner.

Lol it says they published open space notices in “local press” and “no responses were received”.

So basically, it’s a foregone conclusion if all they are doing is seeking the actual planning of the building. Not the use of the land.

I don’t support taking away open space in London. But it’s a piece of unused grass almost backing on to a railway line. People want more social housing in London and they are going to sell off every piece of land they can get their hands on.

I’m not surprised there are plans to build on this site. Assuming it is not of special wildlife importance (which seems unlikely) I had assumed that a house would be planned in the character of the terrace, and replicating what was probably on the site before the war.

But instead this is what is proposed: 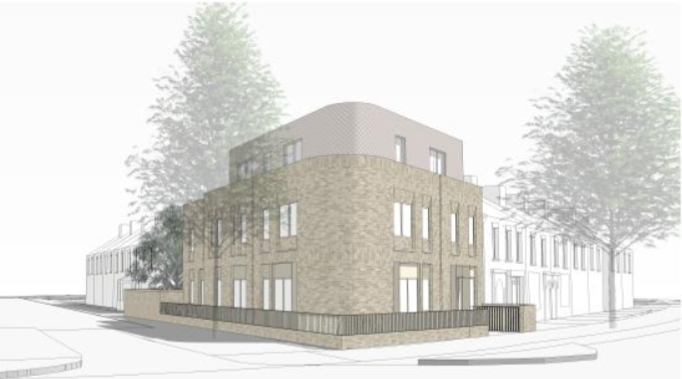 It seems about as out of keeping with the street as anything I can imagine. I can’t wait to see reference in the planning application to the windowless side of Travis Perkins to show how this ‘fits in’ with the character of the area.

I’m not sure what counts as a valid objection for land disposal, but agree that an ad in a local paper isn’t that transparent.

One would also imagine that the Council wouldn’t sell, and an organisation wouldn’t buy, a piece of land unless there was some sort of assurance that a development of some sort would be approved. I guess we wait and see if the artists’ impression is a true representation of their vision for the site in their planning application…

This was build a few yards away - has to form some sort of precedent.

That house stands alone beside two houses that are unique for the area, next again to a school. Not at the end of an exposed terrace. And the house is not particularly visible from the road.

Don’t see the huge issue myself tbh. Constant cries for more housing, more facilites etc, yet they are met with outrage for not being similar enough to the surrounding area.
While I appreciate it is a delicate matter to some, I would hope that sense is seen in building buildings appropriate for their purpose, rather than making the local area look matching.

As for the picture Beige posted, exactly, this new proposal is hardly as extreme as that.

A number of residents of Stanstead and Rojack Roads

What number, and how representative a sample of the residents of these two roads are they when broken down by tenure, e.g. owner occupiers, social housing and private tenants?

Also just wanted to point out that the question of losing local green spaces is surely a bit weird, given that the site has a designated road number therefore was obviously once the site of a property

A number of residents of Stanstead and Rojack Roads

What number, and how representative a sample of the residents of these two roads are they when broken down by tenure, e.g. owner occupiers, social housing and private tenants?

I’m afraid that did I not discuss with those individuals I met whether they were owners or tenants. I can only speak for myself and I am the property owner.

Can I ask what you mean by the saying that 4 flats will cause a huge amount of traffic? Do you mean just during construction?

Yes, Emily I mean while the flats are under construction.

I just wanted to clear up a few points in relation to this proposed build.

A small number of residents immediately opposite the site were contacted by the developer earlier in the year.
No one was contacted by Lewisham Council.

The ‘Open space ‘ and subsequent transfer of land for development has been agreed in principle at the Mayor and Cabinet meeting.
Birnbeck Housing will be granted a 120 year Lease subject to them receiving planning permission. The land will not be transferred otherwise.
This is not a sale of the land.

This ‘Open space notice’ appeared in 2 consecutive issues of the South London Press on 4th and 11th April.
The South London Press, which services the whole of South London. (all boroughs including; Greenwich, Merton, Lambeth, Bexley, Croydon, Lewisham, Southwark census circa: 1.924,208 people).
Its weekly readership on A Tuesday is 19,210. The readership is less than 1% of the area it serves. This also indicates that the readership in the relevant area of Lewisham would be less than 1%.
South London press Public Notices are also not published online, only in print hence ‘notices’ being undiscoverable.
I eventually found the notice, albeit too late, after much research and eventually calling all the local press and asking them to check all advertising bookings made between March and April 2017.
This is how the public notice was found. It had to be emailed to me by a member of the South London Press staff.

No notification from Lewisham Council or Birnbeck Housing Association was given to any members of our local community that the Public Notice was available for viewing and response.
Many residents contacted the developer and the Council for more information whilst the consultation period was open, none were directed to it.

You would imagine in the 21st century any public notices would be published online.
Lewisham has refused to reopen the consultation period for this notice, with this caveat…
“in light of your feedback we will review how Legal Notices are published in the future with an aim of making them easier to find online”

“Easier”? It has never been published online, anywhere. So pretty impossible to find I would imagine.

Of the dozens and dozens of local residents I’ve spoken to, none are objecting on the basis of this being for social housing. I’m sure all are well aware of the need for additional housing in London.
There is however a list with Lewisham’s ‘Local Plan’ of brown field sites that have potential for development.
These are not in areas designated as ‘deficit in green space’ by the Lewisham Council, as this area is.

Residents that I’ve spoken don’t want to lose the only piece of green space in the area.
The planning application is due in at the end of the month, so we’ll have to wait until then to
see if the building differs from the visual above.
Especially as we were given initial assurances by Birnbeck that the building would be ‘in keeping’ with the surrounding housing stock.

There are multiple reasons why this proposed build would have a detrimental affect on the health and wellbeing of local residents.
Many have been mentioned above.

The yellow notices will go up near the site as soon as planning is in, then we can all have our say based on the actual plans.

the sad truth is that it would have been approved as ‘good design’. ‘in keeping’ is interpreted in many different ways. I hope more of you would respond to the updated neighbourhood plan to emphasise the importance of the deterioration of the very elements that make up the ‘sense of place’ here. We received many comments last time from people who stated that they don’t think there is anything ‘special’ about the architecture of the area, and that we shouldn’t be too prescious about it. Some don’t think this is the dominant view, but more views need to come forward before we finalise the plan to stop the demolition of other good buildings in the neighbourhood. There’s a couple of those as well at the moment.

I’m absolutely astonished by this. We know there is a crisis of lack of housing in the UK, & in London in particular. We also know there is a crisis in adult social care. This is a small development offering very vulnerable disabled people dignity, safety & independence. I absolutely support this development. Frankly, it’s likely that some of those precious Montessori children will be diagnosed with autism at some point. This is exactly the kind of development we should be warmly welcoming into our community.