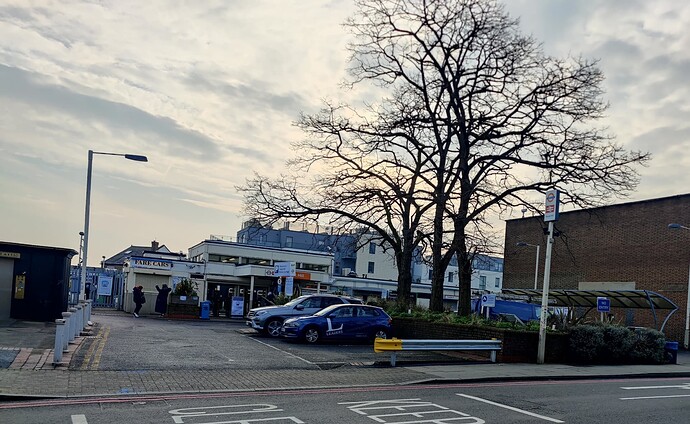 It really gives the South Circ a lovely motorway feel there

I don’t really blame them as it was always getting dinged. Drivers round these parts don’t seem to be able to leave walls standing.

I thought the same. What a shame they couldn’t rebuild the brick wall back!

It looks horrible.
Hopefully it is only temporary until the car park can be adjusted to remove the other exit and create a pedestrian friendly area.

Hopefully it is only temporary until the car park can be adjusted to remove the other exit and create a pedestrian friendly area.

Is the pedestrian-friendly area actively being considered by whoever owns the car park?

The wall opposite the entrance by the coffee and bike shed has also been hit and has an unstable wobble to it. Beware. I sat on it today and almost went over backwards

I seem to remember that the only people who use the car park long enough to pay are tfl and taxi employees, so I doubt they will remove

I wonder if they should have put in a planning application to make a change of this kind? This is very very close to, if not within, the FOH conservation area.

But I keep forgetting - this is Lewisham, with more satellite dishes per square inch of any conservation area anywhere in the country, so a metal crash barrier will be of no concern.

Yes there will be a trial scheme to create a pedestrian area on the right hand side of the car park in front of the station (4 car spaces), as well as redesigning some of the street furniture (moving the bike rack, getting rid of the black loo thing) plus we have some NCIL funding approved as part of an FHSoc bid to get some planters in to make it all a bit pedestrian friendly. It’s a trial scheme, so we’ll see how it goes - we’re dependent on TfL and various other bodies to go though with their end, but ultimately we want to look at doing some nicer things like a water fountain, bike pump/tools, a mural on the wall and maybe even some kind of occasional mini street market as there’s a lot of footfall there. It all depends, but I’m open to ideas/volunteers via the usual FHSoc email.

Is that the recently announced £20k, the largest NCIL grant in the Forest Hill ward for this round?

I’d be interested to see the plans for what the £20k will be used to deliver. Exciting times!

A fountain would look good!

Yes, we have £18k to brighten up one side of the area in front of the station. Hopefully it’ll be a lot nicer when you don’t have to dodge oncoming cars whilst trying to get to the entrance.

We’re waiting until the funding is all confirmed and approved end of March until we know what to spend it on. And yes a ‘parklet’ is more than just planters.

when you don’t have to dodge oncoming cars whilst trying to get to the entrance.

Or we could of course use the pavement that runs around the car park.

It may just be the times I use the station, but I don’t see many bikes in the bike rack. Will the new rack be more compact?

At the moment drivers don’t even follow the “one-way in” and “one way out” routes of this car park. Many of the walls have been knocked over by drivers. I think it’s about time pedestrians and residents of the area were prioritised over commuters driving in and out who have no respect for our area, it’s actually quite dangerous coming in and out of the station with the cars, I had one car almost hit me coming out of the car park as they drove along the pavement more than they should have.

I think it’s about time pedestrians and residents of the area were prioritised over commuters driving in and out who have no respect for our area,

Quite right, lets get rid of those pesky commuters that also happen to be residents of our area.

Not everyone driving in or out of the station is a commuter! Many are private hire vehicles which are being used by local residents with mobility issues or travelling with luggage!

I don’t think many people use the bike rack as they are not percieved as being a safe place to park your bike. I think the aim for new bike storage should be to make it better so that it is used more. Cycle lockers offering more secure but less storage might be an answer.

I have noticed that the bike racks haven’t made it onto the London cycling parking map that I use which is good to find a bike parking spot and it gives you a photo so you can see what kind of bike facility is available. 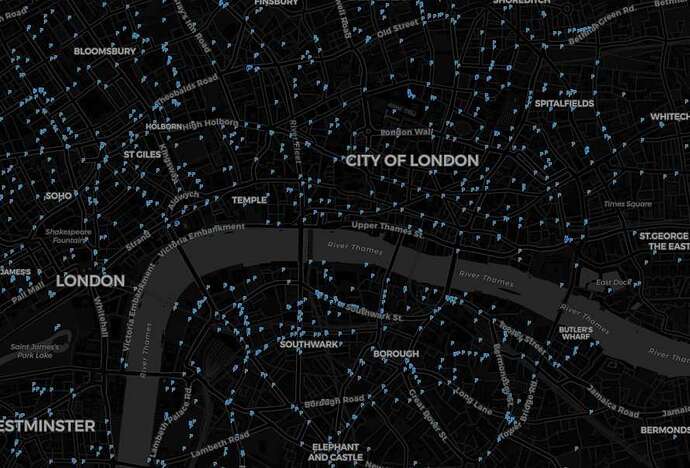 The London cycle parking map. An extra optional layer has been added to the map so you can see police reported stolen bike locations near the cycle parking.

That makes sense.Given the topography of our area, I just wonder how much use any form of cycle storage will get at the station.

I think part of the pedestrian / car problem is that the station entrance is framed by large planters with an additional pinch point created by ticket machines. This forces pedestrians into the road, mixing them with vehicles. Here’s a Google Earth view showing the situation (where amusingly the wall is under repair!): 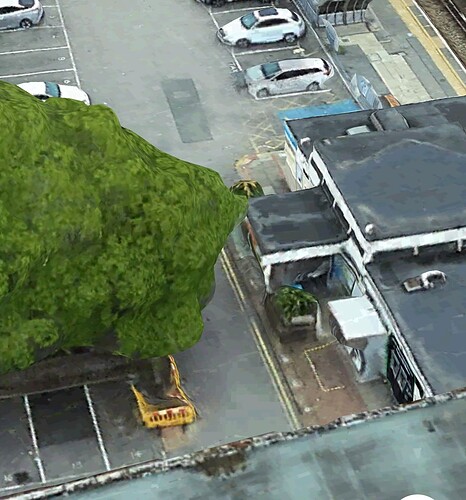 Closing the WHSmith side of the car park, and opening it up to pedestrians (and moving the bike rack) will probably help those on foot, but I think that without a through route for vehicles the single entrance could become a log-jam backing up onto the South Circular. I guess trials will show if this is an actual problem or not.

Still, better would be to do away with that tiny car park entirely and redevelop the entire station front to some sort of pedestrian friendly piazza. At the same time a new entrance could be developed at the end of platform 2 with a proper turning circle for vehicles and step-free access from the Perry Vale side (without having to go all the way around).

I think Network Rail may even already own the triangle of land there add it’s often used to store railway equipment: 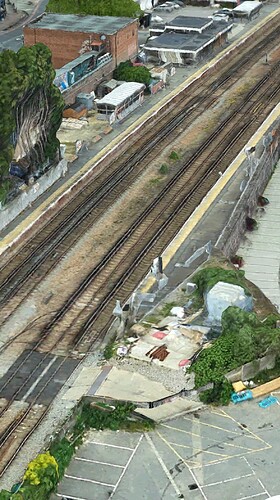 I think the vast vast majority of people are walking to the station. Suggesting they walk the long way around the pavement isn’t realistic - it’s barely wide enough for one way footfall with all the ATMS and stuff, let alone when the station is busy.

It’s simply unnecessary to need to drive around the loop when it’s easy to turn around in the car park. For anyone with accessibility issues, you can still drop off right by the station entrance. It is unlikely this will inconvenience anyone, whilst making it a greener more pleasant experience for the majority of station users.

Bear in mind it’s a 6 month trial, so everyone will have plenty of time to comment on how much they love or hate it, I’m happy to hear the whole ‘woe is me, war on cars’ lament.

Let’s also not forget this has been a huge effort (try getting any change through Arriva, network rail, TfL and NCP all at the same time during Covid) by a group of volunteers who just want to make Forest Hill a nicer place to live, make the air just a tiny bit more breathable and as I said, not have to dodge cars whilst trying to make it to their train having battled the crossing that we can’t do anything about because TfL are basically bankrupt. You have to start somewhere.