Join us for a Discussion, Presentation and Q&A Session with Vasco Stevenson in our Library Events & Meeting Space.
Tea, Coffee & Biscuits available.

The Garífuna are a mixed African and indigenous people originally from the Caribbean island of St. Vincent who speak the Garifuna dialect of the Arawakan language. The Garifuna, also called the Black Caribs, are the descendants from a mix of Amerindian Arawak, Carib and African people. Some Garifuna were exiled to Central America by the British after the second Garifuna war in 1797 and their population expanded to between 300,000 and 500,000.

Garifuna is spoken in Central America, especially in Honduras (146,000 speakers) but also in Guatemala (20,000 speakers), Belize (14,100 speakers), Nicaragua (2,600 speakers), and the US, particularly in New York City, where it is spoken in Queens, Brooklyn and the Bronx. By the 1980s, the influx of Central Americans made languages including Garifuna begin having a presence in Houston. The Garifuna language was declared a Masterpiece of the Oral and Intangible Heritage of Humanity in 2008 along with Garifuna music and dance.

Today the Garifuna are in a battle to save their culture……

Join us for a Discussion, Presentation and Q&A Session with Vasco Stevenson in our Library Events & Meeting Space. 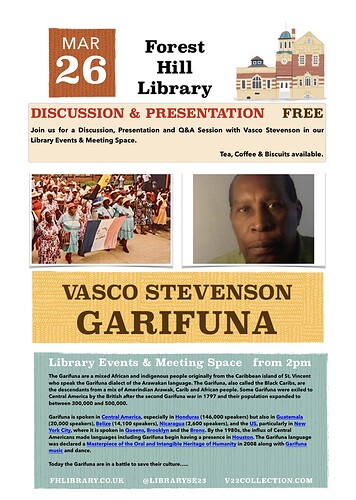