I’ve just paid our yearly garden subscription, if anyone else would like to get on board!
It was easy to do, (no technical problems).
I haven’t had any notice from Lewisham, my neighbour paid hers last night after getting one of those awful letters…

Thanks @GillB , you’ve reminded me I need to pay ours. I’ve had no email reminder either.

It really is a shambolic system to set-up and renew, great collection wise though once running.

I agree. Y poor neighbour said she went to war with them last year after getting one of those letters, even though we both paid it about the same time!

New Forest District Council sent a very confusing letter, saying we had until late June to renew with a discount because they cancelled collections for months last year. Then on collection day on April 4th they tagged the bags and left them in the rain, with notes saying because we’d not renewed they wouldn’t take them. They probably wont take them next time because the rain has made them so heavy.

It just seems that it is better to use your own initiative & just pay when it is due, instead of waiting for a council e mail or letter.
Such a shame you may now be left with all that garden waste. I hope you are going to complain.

Some years ago in late summer I called the Council to say my brown bin had been stolen and could I please get another.

It hadn’t been stolen, the Council took it away because I hadn’t renewed my subscription. I’d forgotten, but there was no renewal email or letter

Paid immediately, but it took several weeks (six, if I recall) to get it replaced.

Anyway, have renewed which was fairly straightforward. It appears you have until the end of June to actually renew your subscription, so a 3 month window. 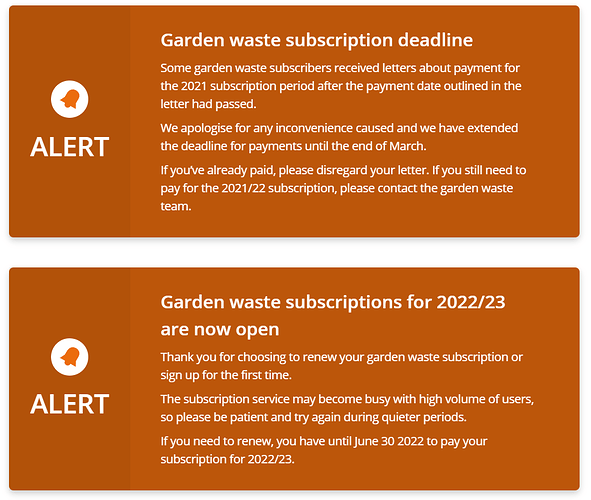 Sign up for garden waste collections or renew your subscription

Get regular garden waste collections from your kerbside!

Last year I paid for my bin. And they still took it away because their records weren’t right! Bin had my address. They gave me a brown bin back, but not the one with my address!

We received a subscription renewal letter this morning - this time addressed to ‘Garden Waste Subscriber’ instead of ‘The Householder,’ so someone at Lewisham has taken notice of the comments saying the previous letters were easily mistaken for junk mail.

The subscription payment period opened on 4 April, so it should be safe to renew now and it will count towards the coming year’s subscription.

Yes we got one of those this morning as well. Having paid already, it went straight in the recycling

Hey everyone, here is a useful guide about garden waste collection costs -

My garden waste bin has not been emptied for the past 2 weeks. Slightly concerned that despite us having til June to pay, and the fact I have actually paid for this year’s renewal, my bin will disappear in some admin mix-up as yours did last year.