Getting a bit bling in Perry Village this morning 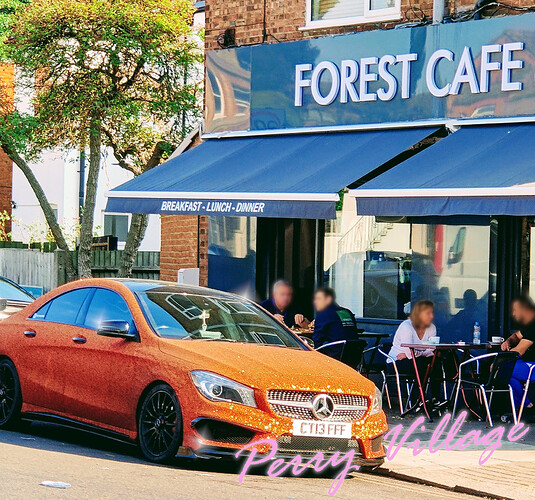 It’s on the rise

Where is Perry Village?

There’ll be no “Perry Village” until Valentine Court is earmarked for total demolition, its tenants moved elsewhere and more desirable housing stock is built. I’m sure there are some very nice and hard-working people who live there and deserve to be re-housed locally, but the harsh reality of gentrifying an area is that you have to get rid of all the riff-raff before any headway can be made.

I don’t think anyone knows the exact boundaries of Perry Village, but the Forest Cafe & Bistro is definitely the epicentre of its recently rejuvenated foodie quarter.

Also Perry Village has been visited by Royalty helping put it on the map - though the press concentrated more on what Kate was wearing than anything else.

Great postcard.
The car attracted many admiring glances while I sat next to it for breakfast at the bistro this morning.
Valentine Court lies outside Perry Village and is over the border in Forest Hill.

I have genuinely never heard of a Perry Village around forest hill. Is it recently named by the local residents? or is it a well known village. How long has there been a Perry Village?

Perry village is not easily visible to outsiders. We like it this way.

We walked past this car this morning. My 21 month old pointed at it, the sparkliness must have caught his eye. Lamborghinis next?

Ah that explains it

Though the wilder claims of Villagers are probably a bit remote from reality.