Concerned to discover the activists threatening historical monuments in the U.K. have added @HornimanMuseum to the hit list: 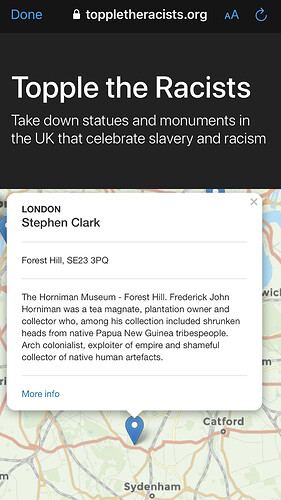 I wouldn’t describe the group as a mob, not sure which part of their purpose statement would suggest that… or am I missing something?

What did it say?

The same title as currently. I edited a word in the post content on advice from moderators.

Anyway, surely the safety of the Horniman Museum is the important subject for discussion here?

Right so it’s a question of it being the text not the title. My original point still stands

I had a quick look and even on the horniman website they acknowledge that the family’s associations with the tea industry and the collection itself is to be viewed critically. I can’t remember the exact signage in the museum but maybe they can include (or already do) wording to educate people on history. That’s the point of a museum right? To learn about history?..

Edit: on the word “mob”. Thank you Nadia for calling it out. It was edited, which is good! Our language right now is powerful, which is not to say we must be politically correct 100% of the time. But please be aware.

In my view, groups of people that roam the streets arbitrarily destroying other people’s (or public) property are indeed mobs. But I will give “Topple The Racists” the benefit of the doubt for now, hence the edit.

I despair at this selective editing of our history and art. Gone with the Wind has been banned now. What next? Digging up Trafalgar Square? Burning Shakespeare’s plays and Burns’ Poetry? Burns Night will obviously need to be banned and all artefacts of the African kings who sold their captors into slavery destroyed.

We should learn from our history, not deny or erase it. I’d like to see a fraction of the energy going into this turned to opposing slavery and debt bondage today. But I guess we’d have to give up the constant upgrading of our mobile phones for that and that’s a bit more of a sacrifice than 18th Century society women boycotting sugar, isn’t it?

I think you are being alarmist. I don’t think there is reasonable cause for concern for the museum’s “safety”. From the website in question:

Who have we included?

We have included cases where there is responsibility for colonial violence. History is complicated so we have made some judgment calls. We welcome feedback.

What do we want?

To promote debate. It’s important to shine a light on the continued adoration of colonial icons and symbols.

Are you saying the statues should be torn down?

It’s up to local communities to decide what statues they want in their local areas. We hope the map aids these much-needed dialogues.

Clearly there is a debate to be had concerning the legacy of Horniman— the museum itself is quite clear about this. Not only about the name, but also some items in the collection, most famously Benin bronzes.

On the topic of Colston, this is a good article by historian David Olusoga. The toppling of his statue was a protest following a long and stifled campaign to get it removed (or even to add a plaque commemorating the victims of slavery) peacefully. It was not a “mob” of people roaming the streets of Bristol looking to “arbitrarily” destroy property.

Monuments glorify individuals, they are not effective at educating people about negative parts of their legacy. Movements like this clearly are effective at raising awareness of figures like Colston and of the lasting influence of slavery on cities like Bristol (and London).

Others have said it far better than I 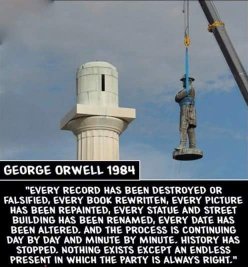 Almost all museums are beginning to face up to this- the Horniman is actively acknowleding this and envolving its approach. The massive investment in the world gallery and the change in its curation style was part of this. They actively seek community engangement with projects such as this https://www.horniman.ac.uk/project/community-action-research-african-and-caribbean-collections/

As @neilw states the activist group are asking for feedback - it also unclear who this group are and how much this wesites reflects opinion generally. It is not part of the ‘official’ BLM movement as far as I can see. The is a plurality of opinion in any group and these may well be on the fringes.

Almost all museuems are beginning to face up to this- the Horniman is actively acknowleding this and envolving its approach.

I’ve noticed this too. The Horniman put out a statement recently, and it’s in a really good position to educate about the dubious moral landscape that existed in Victorian times (in which few people were morally pure by 21st century standards).

It would be devastating if this “Topple the Racists” listing caused activists to harm the museum.

I had a quick look and even on the horniman website they acknowledge that the family’s associations with the tea industry and the collection itself is to be viewed critically.

Frederick Horniman has historically been remembered through his museum as a social reformer who campaigned for the creation of the British Welfare State, and was committed to raising standards of living in Britain across all sectors of society. It is said that he built his museum to “bring the world to Forest Hill” and provide an opportunity for people from all walks of life to see and learn about global craftsmanship and creativity.

It is however also important to remember that the wealth that enabled him to make his collection, build his museum, and campaign as a social reformer in Britain, was reliant on the exploitation of people living in the British Empire.

The tea trade is widely known to have relied on the repurposing of land to build tea plantations, often involving the forced relocation of people already living on and using that land. This had long term economic and social impacts that continue to affect people’s lives today.

The tea growing process was labour intensive, poorly compensated, and in many cases used indentured or forced labour. The protections for workers that Horniman campaigned for in the UK were knowingly absent in the global plantations that he relied on to supply his business with tea. It is this exploitation that made the tea trade so profitable.

The Victorian and colonial context in which Frederick Horniman and his staff collected and documented objects also needs critical reinterpretation today, working with international partners and community members to ensure their cultural heritage is displayed and cared for respectfully and ethically.

In my opinion, the Horniman has got the discussion absolutely right here.

Acceptance that the collection is only there as a result of the wealth gained through Imperial exploitation - and a commitment to engage in critical discussion about how best to respect the various cultural heritages - whilst still retaining a valuable educational resource. 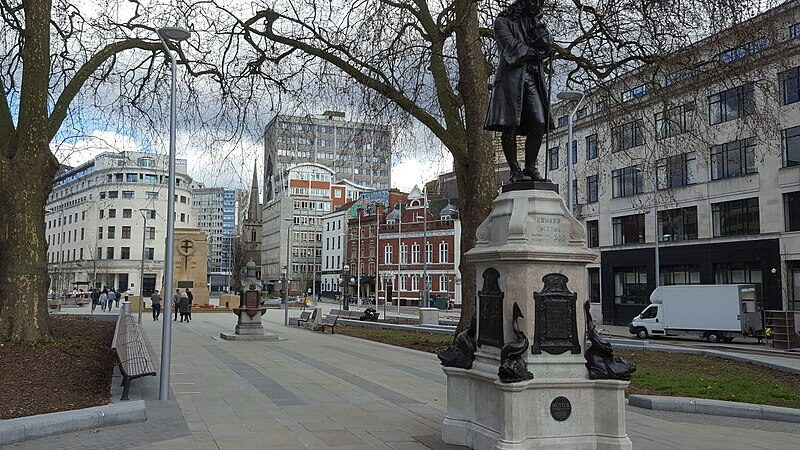 Labour councils pledge to review all statues and commemorations in their areas...

I hope this will be a proper consultation, rather than an armchair click vote. Genuine unbiased and thorough research needs to be published before any statue or monument is removed. I don’t recall anything in any previously published manifesto about any proposals to remove monuments. No one is a saint. Ghandi had his faults and we should acknowledge and remember them but he’s also revered by many for the good he did and tried to do. We don’t cleanse history by hiding or selectively editing it. If we do so it will be repeated in other ways. Far better to see these monuments in context - of their times and of the whole life of the person - and to add footnotes and links.

History is no longer the propaganda of the victors because good research access is now easily available to all. But it is in danger of knee jerk reactions to ill informed surface research and biased wiki type posts.

Hitler said (vastly paraphrasing from memory here) that he would in effect get away with his “final solution” because no one remembered what the Turks did to the Armenians. Maybe if there had been some kind of physical memorial people would have remembered?

It’s not arbitrary, and actually very few of these colonial icons have been “destroyed” thus far.

The “targets” are specifically figureheads of the slave trade who profited from the pillaging of bodies, resources, and artefacts, and are celebrated with statues in prominent positions and buildings named after them. 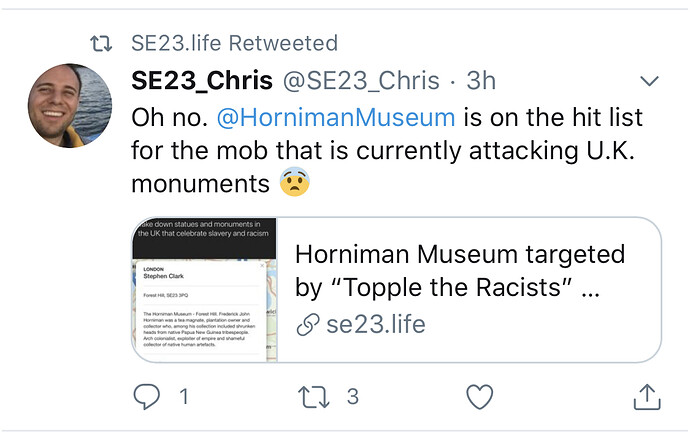 If there is a proper public consultation (ie democratic process), and the public wants a statue to be toppled, then the toppling is not arbitrary.