How are property prices changing in your London borough?

How are property prices changing in your London borough?

Kensington and Chelsea has experienced the biggest drop in property prices in London, while Hackney has seen the greatest rise.

Kensington and Chelsea has experienced the biggest drop in property prices in London, while Hackney has seen the greatest rise, according to estate agency Hamptons International.

The agency found a minimal change in the overall average price of a home in the capital — £475,030, down 0.1% on the previous year — but revealed stark differences in price trends across London. 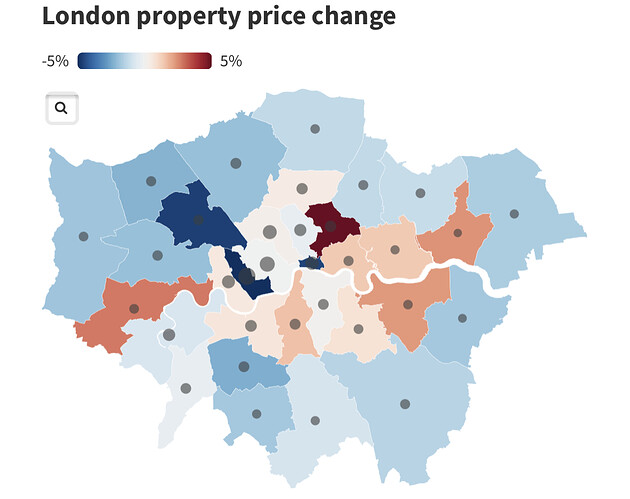 Hamptons used Office for National Statistics (ONS) data to compare average house prices in each borough over the past 12 months versus the previous 12 months.

House prices across Greater London were falling for the whole of 2019 and half of 2018, according to the ONS.

“Up until the middle of last year, we were seeing much greater house price falls in central London while the outer areas were still seeing healthy levels of price growth,” said Aneisha Beveridge, Hamptons’ head of research.

“We always talk about a ripple effect flowing out of central London and by the end of 2019 and into the beginning of 2020, we started to see house price falls in outer London while prices started to rise in central boroughs such as Lambeth and Hackney.

“Everyone was talking about a Boris bounce; the market sprung back into life at the beginning of the year which is when we started to see prices rise again, particularly in those inner London suburbs which is reflected in this analysis too.”

The Covid-19 pandemic meant the English property market was frozen for almost seven weeks, from March 26 until May 13.

“Although we don’t really know what’s happening to house prices in London at the moment, we do know the outer suburbs are becoming quite popular.”

PropCast takes the temperature of a postcode by calculating what proportion of properties on the market are under offer or sold subject to contract.

TAKING THE TEMPERATURE: the hotter the market, the easier and quicker it should be to sell a property. Source: PropCast

PropCast reveals that nine of London’s current 10 coldest markets are in central or inner London, bar W9 (Maida Vale, which is covered by inner boroughs Camden, Westminster, Kensington and Chelsea and the outer borough Brent).

Only three of the top 10 hottest postcodes are in inner London: SE4 (Lewisham), N5 (Highbury) or SE23 (Forest Hill).

PropCast founder Gavin Brazg said: “Since lockdown, there’s pent-up demand from buyers, which remains strong and hasn’t petered out yet.

“The majority of that demand is from first-time buyers, who are much more likely to be interested in the lower end of the market, which is why we’re seeing more buyer demand and activity in E17, SE4 and SE9 compared to the rarified prime London buyer market in W1, N1C and so on, which is a completely different buyer profile.

“Investor buyers and HNWIs with their finger on the pulse of global macroeconomics are probably thinking, crumbs, we’re looking into the eye of major global downturn — now is not the time to be investing in property.”

How up to date is the ONS data? The article says ‘over the past 12 months versus the previous 12 months’ - is that really upto the end of June 2020? I’d be surprised if the whole lockdown doesn’t have a massive knock on effect over the next few years given the amount of economic slowdown. And then we have the B word looming too. I think all in all and with people moving out of London because they can work from home, businesses closing office space etc the downward pressure on housing is inevitable. Any positives in there are just a blip.

The OH works for an estate agent primarily in Camberwell and surrounding areas including Sydenham and FH. She has never been busier. Most properties are going for over the asking price.

Does that make any logical sense to anyone? People are furloughed, huge unemployment, businesses shutting down left right and centre and people are paying over asking price for houses? It’s not that I don’t believe you, I’m genuinely surprised.

Same! We were thinking about selling up but decided to rent our house out instead.
I thought prices would be tumbling and I’d give it a few years to see if there was a recovery.

Purchasers evidently believe the current crises are temporary, and that the U.K. has brighter days ahead. I’m one of those people. I’m not alone.

Does that make any logical sense to anyone?

Population density of much of Forest Hill is low, together with fairly good train service.

People need housing and a lot of people had savings/parents and were ready to move pre Covid. People are also selling and moving up the chain and on and on.

Despite Covid there are still people working and getting paid, very low lending, people like Nationwide doing 90% first time buyers loans. It all ads up in the end.

My wife has a lot of people putting in silly, low offers when housing went back, all were rejected. Most valuations were done at pre Covid levels, and in some cases, higher.

Let us not forget how attractive the break in stamp duty is. A friend who’s buy/sell stalled due to Covid is now looking at a significant saving if it can get going again on a purchase of a home around £750k albeit in another part of Sze London.

There is danger of course of a short term bubble given the time limit on the break.

There is danger of course of a short term bubble given the time limit on the break.