Has anyone had their kitchen caddy bins delivered yet? They have a supposedly lockable handle

We’ve got ours. Locks down pretty well. Given that many councils have these bins, I’m assuming there’s a tried and test design. I think it would be hard for a fox to get enough leverage under the handle to exert upward force and at that point they’d probably go look for an easier target,

Having said all that, I may well be proved wrong!

The handle on ours has to be pulled down, but hopefully you are right

I’ve left it outside anyway so will have a chance to see if it gets tampered with in the meantime.

Might as well bag some foot as bait and go all out testing the foxes out. I will be lol.

Not got ours yet. Although did see where they are staging the deliveries from up on Willow Way. Lots of them!

The handle on ours has to be pulled down, but hopefully you are right

That’s what I mean. A handle that locks downwards is pretty hard for an animal with no thumbs to break into. Of course, they could turn it over so they are stepping down on that handle… hmm.

I also assume that the lock down seals up the bin pretty well. Foxes go for open bins and bags where they can smell the food. Maybe that is a factor too.

Give them a generation or two to work on thumbs, sneaky little blighters.
I’m sure there will be plenty of stories of them breaking into the caddies, mainly from the same sort of person that puts black bags out, then screams foxes!

I agree with Rachel about them being able to smell the food, so hopefully I am wrong !
As for people screaming foxes after putting black bags out…well more fool them is all I can say!

I’m looking forward to seeing these caddies. In Southwark we had small food bins for recycling with what sounds like much less complicated open/close mechanisms. Seemed to flummox the local foxes. But maybe they are just stoopider than Lewisham foxes.

It’s not complicated. It’s just a handle. Rotate up to open, down to lock.

I doubt it ha ha!

We have our new bins, smart grey colour, much nicer than our brown ones in Islington! But I have seen these rolled over where I used to live so that the handle just flips open.
Best thing is to put a heavy object on top of them and lean them up close to a wall/fence, even better, sandwiched between your black and green bins. Then they can’t be rolled/flipped so easily.

Yes thanks for that tip

We have had to put it in the back garden as we only have a small front garden & with 3 big bins out there already, there’s no more room! So can wedge it behind a big flower pot

Has anyone had their kitchen caddy bins delivered yet?

Got mine earlier this week (the smaller bin was inside the larger): 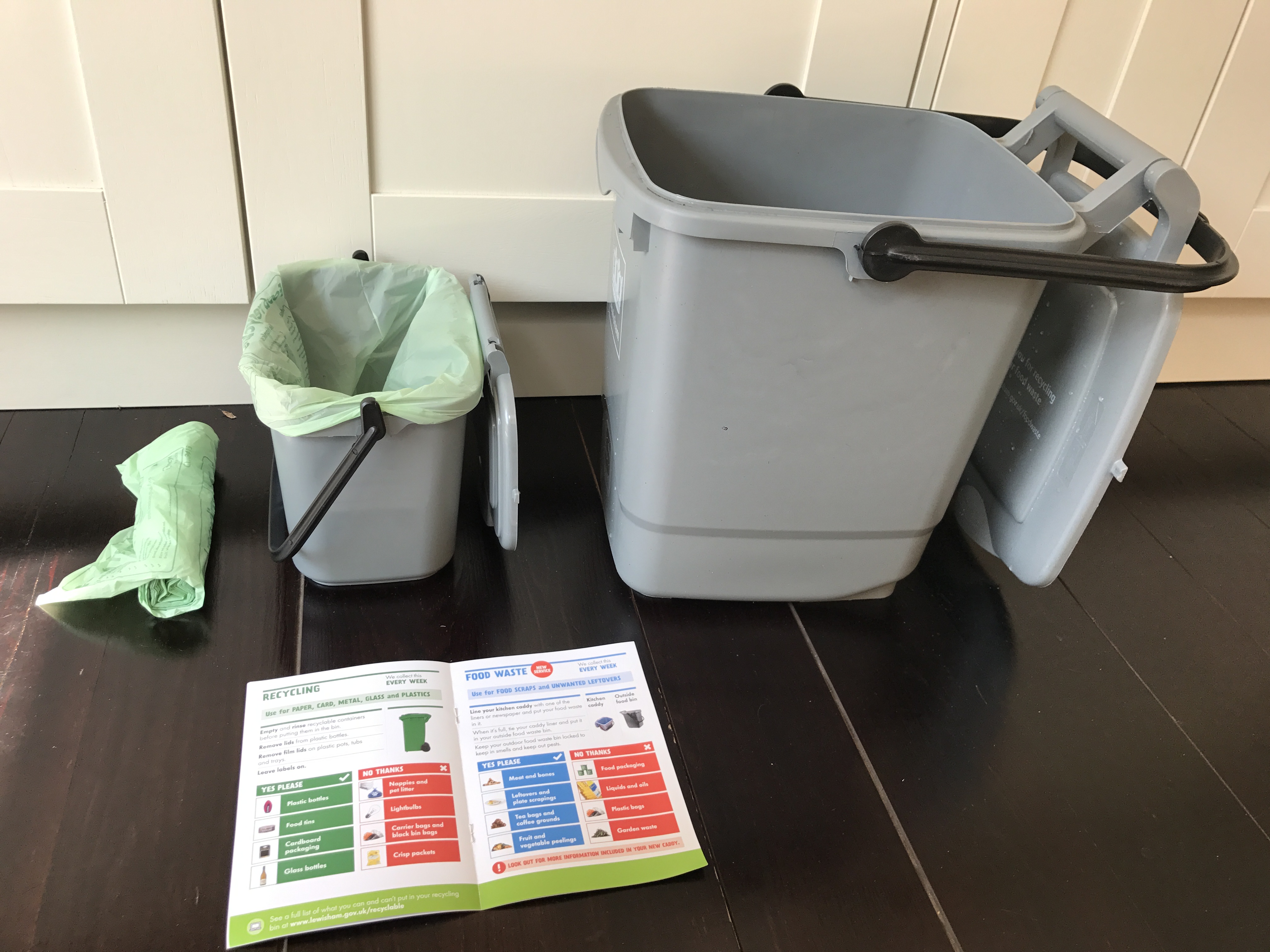 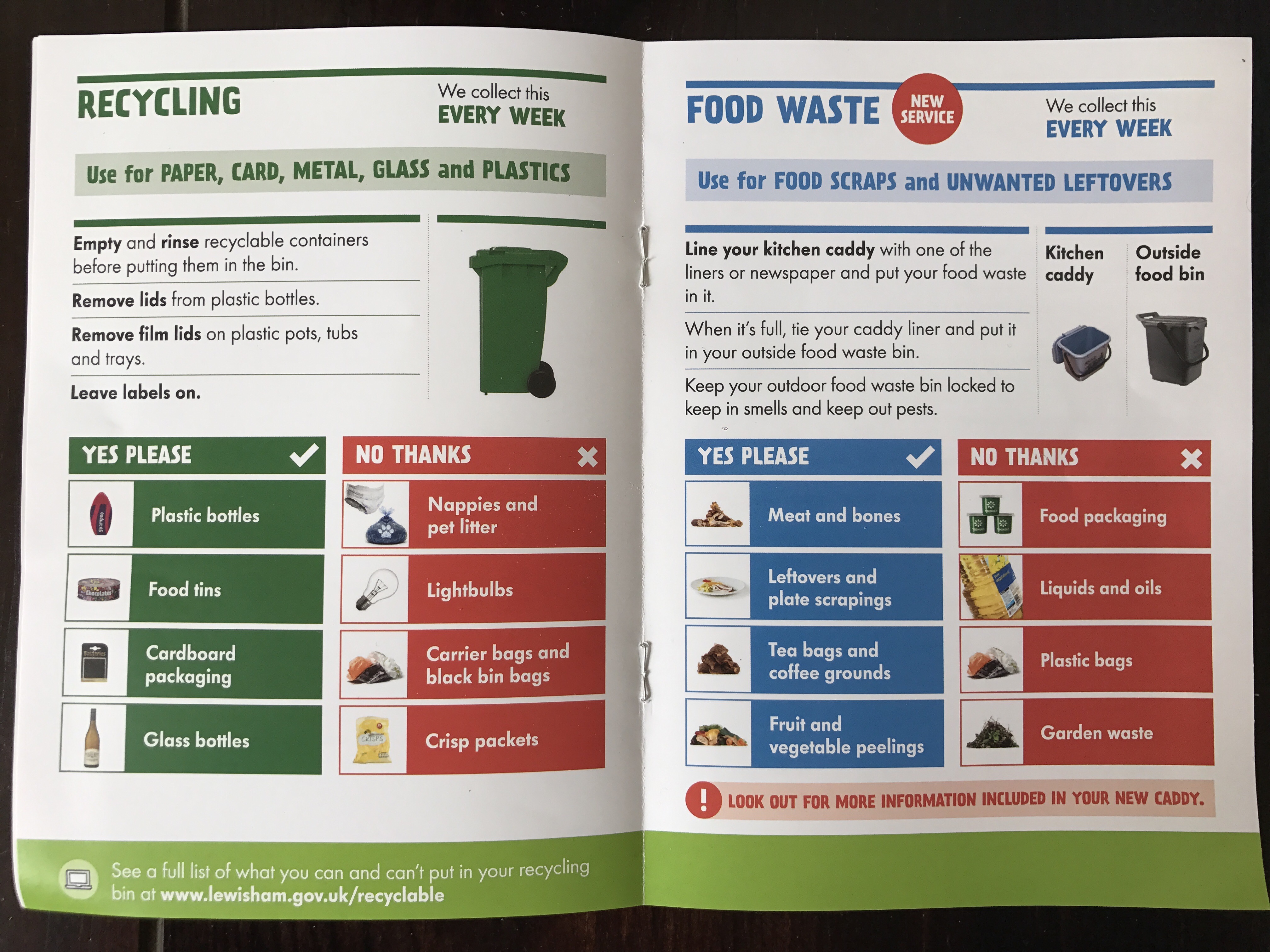 The bins look sturdy enough. It’ll be hard for any animal to get at them when they’re locked, but if they do I’ll set a camera up and the footage will be fascinating!

Monkey proof bins in South Africa are very clever, they have to be.

They are a bit flimsy, the locking mechanism seems to bend about, but locks, to guess it works.

The biodegradable bags are the exact same we got for free in Southwark. Good think we packed away and kept about three rolls of them when we moved to SE23.

I think @Carl Hoskins had the best idea. Keep something on top of the bin to stop it being pulled over, then it won’t open, good lock or not!

We got ours! Shame it’s a long wait till starting collections in October. We was wondering where you get the bags from. Eventually saw it said supermarket or wrap in newspaper.
Also looking forward to pimping our bin so it’s easily recognisable.

Fingers crossed they’ll be sturdy as broken lids would be an issue.