It was open this morning

Was open yesterday. Someone probably popped to get some lunch and put the wrong sign in the window.saying closed rather than back in 5 mins.

All is well and was open today as normal too.

We closed early yesterday, the builder was working in the basement and created an unexpected dust cloud so thick that it pervaded the shop too and poor Julia who was on duty could hardly breathe. The shop was closed early and the first job this morning was dusting!

Good! Getting paranoid with all this closures. I’ll get my vinyl fix next weekend instead!

A couple of posts were merged into an existing topic: Sugar Mountain 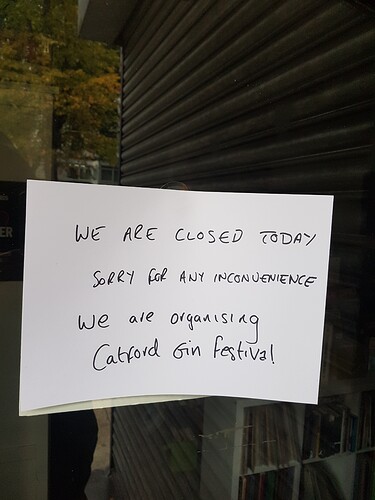 Thankfully another shop took my donation

I took some books yesterday, not happy about this and will look into it!

I won’t put my name to someting that is not giving all to the library.

I spoke my mind on behalf of the community and was shot down because I spoke the truth.

Myself and John have now taken a step back.

Though will question anything we think might be amiss.

Not so much WHOA Mr this happened a while ago, you know I always go with what’s right and what I believe is right, not everyone else does though xx

I still open and close the librRy most days, but I don’t have to agree with small time politics while doing this for our community xx

Hope this blows over soon - you’re all awesome people and you have so much in common via the community work you do.

I’b be interested to hear what’s going on, but if you don’t want to post here, I’ll pop in to your shop sometime if that’s OK

If the library were closed due to the gin festival i would be worried (it wasn’t). The library doesn’t run Leaf and Groove but it does benefit from all the donations / sales.

The closure of the shop for a day or two will have no significant impact on the financing of the library. But if anybody is concerned you can pop in over the week and buy some extra books. And don’t forget to support all the other lovely shops in Dartmouth Road while the traffic is reduced (making parking easier and the road more pleasant for visiting on foot).

If anybody has any concerns about Leaf and Groove they can take it up with @simon. If anybody has feedback on the library both @simon and I would be happy to hear from you privately, on this forum or in any other way.

For me it’s no big deal, I just took my books elsewhere, just a little disappointed that my contribution won’t support the library.

Where did you take them?

My first respone to this was: well, fine.

My second was: hang on, I and many others crowdfunded Leaf and Groove to support the library, not help run gin festivals.

My third was: just put a sign in the window saying closed due to staff shortage. It wasn’t Leaf and Groove as an entity that went off to do something else, it was whoever should have been running the shop taking off their Leaf and Groove hat for the day, I assume.

If on the other hand, Leaf and Groove’s name appears somewhere on the gin festival’s PR as a sponsor or co-organiser or some such, that’s another matter (although it could be argued it’s good publicity for the shop).