Alice Klein, 38, started the petition after becoming concerned about the safety of the staff at Seedlings Day Nursery in Forest Hill – where her two-and-a-half-year-old daughter Sydney Swains…

The nursery has been open throughout the whole pandemic, and many teachers have to commute by public transport.

Ms Klein, who lives in Honor Oak Park, is really appreciative of the work that the nursery does, saying: “My daughter absolutely loves nursery – it’s absolutely brilliant.”

But she is worried about the danger the staff are put in, adding: “It seems really unfair that every day they have to commute into work, often on the bus, exposing themselves to the virus.

“There’s cooks, there’s cleaners and there’s managers. They’re putting themselves at risk every day to look after our children and it seems unfair that we aren’t protecting them.”

The government aims to start vaccinating adults younger than 50 in the spring, but no decision has been made about whether teachers will be prioritised.

There are fears that even if teachers are vaccinated, early years educators will be overlooked.
…

Cllr Chris Barnham, Cabinet member for Children’s Services and School Performance said: “If the Government really does believe that education is a national priority, it requires bold action.

“Serious consideration should be given to prioritising education staff for vaccination. This would reassure staff and their families, and give schools and nurseries the support they need, as many are suffering from Covid related absence.”

In response to the request for onsite testing, a Lewisham council spokesperson said: “Lewisham Council has contacted all voluntary and private early years centres in the borough offering support for their staff to access rapid testing. In addition to the rapid testing sites in Catford and Downham the Council has offered to work with nurseries to establish additional testing options for their staff.”

The petition can be signed here: http://chng.it/CLBSpdk6

We have already signed that petition a couple of weeks ago. Our daughter is a Nursery Manager & she caught COVID recently & passed it onto her boyfriend who is clinically vulnerable. Both are now ok, although he spent 2 days in hospital on oxygen.
But the woman who got it first passed it onto her parents & her dad at 75 & with diabetes (hadn’t been called for his vaccine) is now in a coma & they don’t think he will recover.

Very sad but according to ONS statistics school and nursery staff are at no higher a risk than the average. Plant workers are much, much more likely to catch Covid, so clearly queues shouldn’t be jumped by low risk groups. .

I suspect this is, and will be an emotive issue for many.

There will be many groups more or less at risk than others, by different percentages.

One thing to consider will be the complexity operationally of sorting \ veryfying those groups and scheduling them in for vaccinations. I suspect this will be highly complext and resouce heavy in some instances, so I suspect for speed of rollout the approach may be to vaccinate easily identifiable ‘known’ groups that are public facing, and everyone else is just done in age order as now.

I am sure it’s highly complex and there is no right or wrong answer, but the path must be one that vaccinates the most people in the fastest time as that will likely give us all the best outcomes, in my opinion. If that can be done by easily prioritising more at risk groups all the better.

Yes I know, she has said that herself.
Parents are not allowed into the building, & she travels to work by car.
She works in the office, but does have to do observations sometimes in the rooms. The staff in the rooms do not wear masks (although they are in bubbles) but the member of staff who first got it, gave it to the room leader & my daughter, so it soon spreads.

Edit: having had a quick read it seems to be that we are statistically unable to say they are at any greater than other key workers or those who work outside the home once a week.

For every person in a low risk group that queue jumps, someone loses out. So for example a 30 year old teacher is prioritised over a 57 year old metal worker in an industrial plant? Both are keyworkers. The 57 year old in one of the highest risk occupations; the teacher at no more risk than the average 30 year old. That can’t be just.

Should we take account of the ‘social benefit’ provided by different jobs too though? It seems like that would be the way to make society better off.

Teachers were not at significantly higher risk of death from Covid-19 than the general population, Office for National Statistics figures suggest.

Restaurant staff, people working in factories and care workers had among the highest death rates, followed by taxi drivers and security guards.

Nurses were more than twice as likely as their peers to die of coronavirus.

Secondary school teachers may have been at slightly, but not measurably, higher risk than the average.

Breaking that down by role, secondary school teachers appear to have a very slightly elevated risk at 39 deaths per 100,000 people in men and 21 per 100,000 in women.

Of course there are many other factors to also consider, and there are no easy answers. I would not want to be the one deciding who gets the vaccine first.

The ONS excluded from its analysis any occupation that had seen fewer than 10 deaths, and the average death rate for the whole population masks this variation.

No of course not. They’re in the same Tier 8 anyway. We don’t do social engineering - one person more worthy of saving than another. Or we shouldn’t.

That’s what this petition is, isn’t it?

Age is still by far and away the biggest risk factor. At the moment the vaccine programme is about getting the horrific death and hospitalisation rate down. Vaccinating by age is simple, easy to administer and the right thing to do.

Yep. That petition only has 760 signatures as of writing.

Notably though Ellie Reeves wrote to the Secretary of State for Education saying teachers need to be vaccinated, among other things. 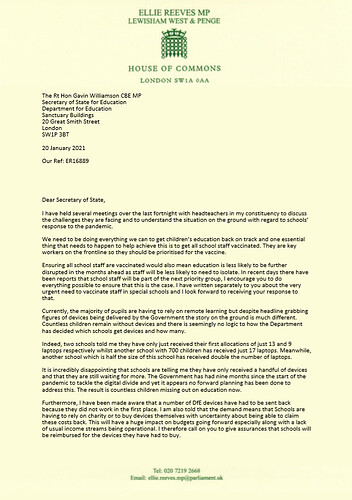 This still doesn’t mean it’s a good idea though!

The petition is about a chosen group queue jumping. So you nursery school teachers and child minders will jump the queue over older higher risk groups. It’s not justifiable either in morals or statistics.

I haven’t read the whole petition and I do not work in the education / nursery sector, but wonder if the fact that children, in particular those of nursery age can’t socially distance is of importance in this debate. As a nursery worker, you will regularly pick up/ wipe faces of/ comfort a baby who does not understand rules of hygiene in a pandemic.

For teachers, I imagine at both primary and secondary hygiene is still an issue with kids. I imagine when teachers are physically at school teaching, they are not wearing a mask in classrooms so kids can see what the teacher is saying. And the teacher is exposing themselves to 30 x bubbles x however many classes they interact with. And again, kids probably don’t quite get the social distance and hygiene thing.

So I don’t think this is about cherry picking people but sensibly selecting groups who are most likely to be exposed to lots of people once the critical groups are vaccinated. Also makes you wonder if supermarket staff should be next too.

The scientific group advising the govt commented on where best to give the vaccination, with the priority being to save as many lives directly through vaccination as possible. They gave these figures as example.

‘We worked out that if you give 20 people in a care home a dose of vaccine, you’ll save a life,” he said. “If you give 160 people in their 80s a dose of vaccine, you’ll save a life. But once you get down to people in their 60s, you’re up to more than 1,000. If you go down to teachers or policemen, you’re approaching one in 50,000. It’s an extraordinarily inefficient way in the crisis to use vaccines – to start going out to these other lobbying groups who are perceiving themselves to be at enhanced risk of exposure, but who are not actually and demonstrably at enhanced risk of getting sick and dying’. 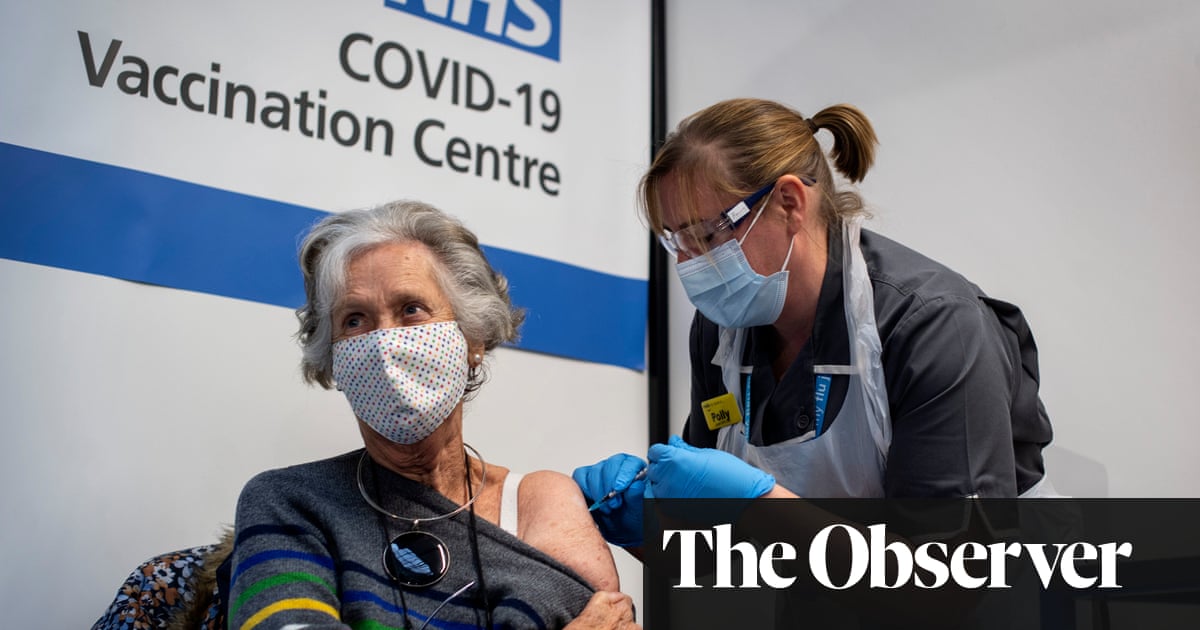 Government advisers say it would be ‘politically, socially and ethically unacceptable’ not to inoculate older people first