Lewisham, your democracy is dying… but does anybody care?

Perspective from a Labour Voter and insightful local blogger @LewishamLately

Lewisham, your democracy is dying… but does anybody care?

Will Lewisham still have a one-party state on May 4?

Poor John Coughlin, the Green Party politician otherwise known as “the opposition”. Even when he can get a word in edgeways, the chances of him having anyone to back him up are slim.

Whatever your politics it is not healthy to have a “one party state” at any level and I would have expected all except the labour party candidates to have been pushing this message if nothing else. But as I haven’t received any communications from the candidates for Perry Vale ward it seems that even they don’t care. With only 1 day left before the election the only communication I’ve received has been from the Lib Dem mayoral candidate!

It was interesting to hear all candidates recognise this as a problem at the hustings:

Lewisham’s mayoral candidates could see more decision-making power given to local communities, with a review of the mayor and cabinet system on…

“I am a localist and believe in devolving power to communities. We are going to be having a local democracy review if I am elected, to look at how the mayor and cabinet and cabinet and councillors, how we could work better and share decision making.”

It will be interesting to see how this turns out. From what I heard at the hustings I believe there had been a previous attempt to introduce some form of PR for council elections in Lewisham but it was opposed by some of the parties. I’ve probably said it before, but I think a PR system for multi-councillor wards is a sensible approach.

Whoever is the next mayor I hope to personally continue to make such suggestions, especially if there is some form of local democracy review.

I gather there was a stronger opposition in the form of Liberal Democrats until 2014. As with the national vote, I guess that the local vote suffered for their performance in the Coalition.

I can see two possible solutions to this problem.

One of the problems we face is many do not believe local authority politics to be important. People often feel inclined to punish a party, usually the one in power nationally, by voting against them at local elections. Unfortunately this can have a negative outcome particularly if a local authority is already disinclined to vote right or left.

From what I heard at the hustings I believe there had been a previous attempt to introduce some form of PR for council elections in Lewisham but it was opposed by some of the parties. I’ve probably said it before, but I think a PR system for multi-councillor wards is a sensible approach.

Yes there was. The only problem is that it is not in Council power to change the system to PR. I forgot who is in charge on this issue, Government or some other body that regulates the elections.

Very recently we voted on the Greens motion calling for the PR. I voted for PR as I also think that with 3 councillors for each ward some form of PR could be implemented. The debate prior the vote was not just about merits of PR but also about putting in a motion that even if passed would not come to life as it was not in the power of the people who voted for it. References were made about the previous attempts to introduce this. So there were councillors who voted against the motion on the grounds that this was the wrong place to hold this debate.

Someone forgot to mention “democratically elected”

I dont know what PR means but there should not be parties involved to fill in Councillors seats. There should be local 3 active residents from each ward. I would vote for Michael if he was give an opportunity to be elected because i know what he does, I can see his activity, his achievements.

Or Maja Hilton, who cares to hear what people say and respond/help whenever she can. Why do we need to have Susan Wise or John Paschoud, who personally done nothing for me and my community, on the list of candidates. I am sure if we get candidates from the community and not party selects, we can have better local government system in the Borough.

I dont know what PR means but there should not be parties involved to fill in Councillors seats.

Proportional representation (PR) characterizes electoral systems by which divisions into an electorate are reflected proportionately into the elected body. If n% of the electorate support a particular political party, then roughly n% of seats will be won by that party. The essence of such systems is that all votes contribute to the result: not just a plurality, or a bare majority, of them. The most prevalent forms of proportional representation all require the use of multiple-member voting The m...

I assume this would mean the party makeup of councillors would reflect the party distribution of votes?

Thank you Chris, but what is the point to have parties at all in Councillors seats? Paries members cares about parties interests first and how to reproduce themselves. Everyone knows that. We need truly local councillors that come from communities regardless their party veiws. We need people who put communities needs first, not party needs.

We need truly local councillors that come from communities regardless their party veiws. We need people who put communities needs first, not party needs.

I think you’re probably right. I think all the party tribal behaviour is quite counter-productive (“vote for us to stick two fingers to Brexit” etc)

But on a purely practical basis, there are lots and lots of candidates for voters to choose between in local elections - If they were all independent, I honestly wouldn’t have the time or patience to figure out what they all stood for, and what their reputation was like.

At least if we know their party alleigance we get a general sense of their values and priorities.

And the national parties also have an interest in vetting their background too, which means we get more credible candidates.

I can see your point Chris.

What may be preferable is a form of non-partisan democracy at the local level. We use this widely across Canada and from my experience it is preferable. Though of course that doesn’t mean its the right thing for the UK.

The municipal government of the City of Toronto, Ontario (Canada) is the fifth largest government in the country, governing a population of more than 2.7 million. It consists of a nonpartisan, directly elected council. The public may have a general idea of the candidates’ political affiliations, but their parties have no official recognition or privilege in the functioning of City Council. Councilors are free to vote on each motion individually, freeing them from party discipline. Almost all Canadian Cites are nonpartisan as well as Counties And RMS.

Lovely, there is such thing there.

Having received very little (one flyer) from this election I did a bit of due diligence tonight on each of the Perry Vale ward candidates. This was a vain effort to try and find out a bit about the individual opposed to simply their political allegiance.

It is really disheartening how many of the candidates have a negligible public profile including a Twitter account.

If you’re reading this (which I doubt) I can’t vote for you if I don’t “know” you.

There was one I had considered from their professional background until I discovered their Mary Whitehouse approach to media and entertainment. Nope. Not for me either.

So I guess I may not vote you too if I get to “know” you.

It is really disheartening how many of the candidates have a negligible public profile including a Twitter account.

Yes, I thought this too. It’s amazing how so many candidates - people looking to be locally engaged - don’t jump on social media. It’s free of charge, it reaches thousands, and it builds an awareness of what matters to local people.

The candidates are mad not to - although perhaps the complacency / hopelessness of this election makes engagement a waste of time for candidates on both sides of the political spectrum.

Having said that, credit to @Liam_Gilgar for making the best effort here so far

Does anyone know who’s likely to come second to Labour? If we normally voted Labour but wanted to avoid this 1 party state who should we vote for?

I don’t recall seeing communications from anyone except a rather dreary Labour leaflet put through my door.
It is almost like everyone has given up trying.

Last elections Conservatives came second but the difference was huge. Over 36,000 Labour, over 8,000 Conservatives. Vote for anyone but Labour really.

From Wikipedia, here is the how the parties fared with number of Councillors over many years. 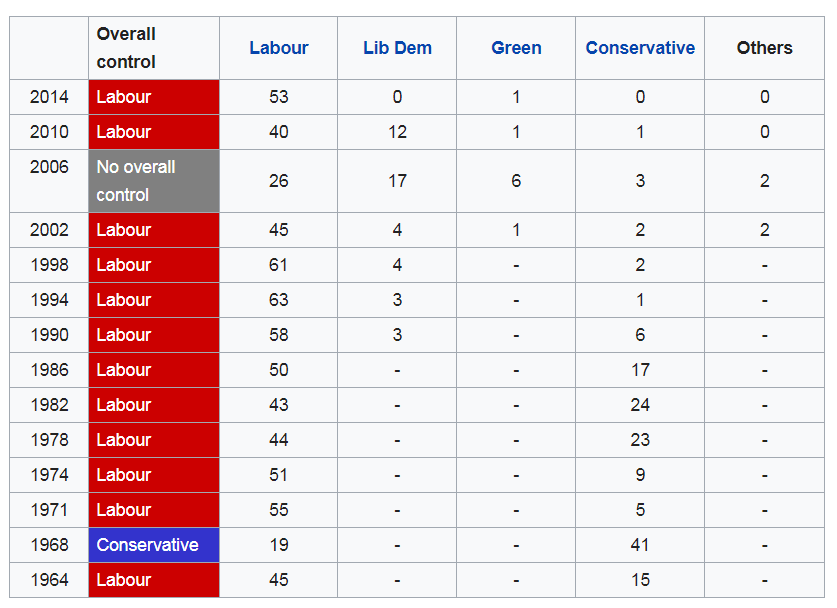