Does anyone else get annoyed by the loud music coming from between the streets mentioned in the title?

I can see the area where it comes from as my bedroom window faces that direction. It seems as if a large group of people always gather there, play the same reggae music day in day out and have the BBQ on. I don’t mind every now and then, but this is every weekend, till late in the evening with people becoming louder and children screaming as well.

Not sure what to do, police won’t do anything anyway and not sure how serious the council is.

Would be happy to report though, does anyone know where?

I now know the sound is coming from the address 24a Benson Road, it’s behind the garden of that property. I’ve reported it to the council today and if the noise continues after 22:00 I will call the 111 number to see if they can do anything.

Kids have been yelling the entire afternoon and evening, no parent trying to keep them under control or teaching them to be less loud as there’s other people living in the area. They’re all just pretending that they’re the only people living in this place…

So angry and frustrated,

Yeah I’m a few houses away from the source and it’s ridiculously loud and utterly selfish!

If you want, you can report it here: https://lewisham.gov.uk/myservices/environment/noise/report-noise-and-other-disturbances which is what I’ve done as well and my neighbours have as well. If you could also do this, then hopefully the council can do something about it and order them to take away the music equipment.

Yep I’m in Devonshire road at Benson Road junction and have had enough of this music since 3pm today!! Can’t even hear my own tv. I too have also reported it to the council but I’ve done that in the past and not got anywhere… where’s our local community team force to help us??

I’m planning to call the council tomorrow and discuss this with them as yesterday the noise didn’t stop until some time after 2am!!!

How disrespectful people can be is unbelievable…

Yes we agreed last night that we’d do that next week. Didn’t sleep until after 2am. Do we know the actual address? Did you see the party? I can’t see much out my window but it sounded like it was along Devonshire Road to me…

The party was in the neighbouring back area of the garden where our flat is. It’s on Benson Rd, 24a begins their garden or maybe it’s their garden as well, it’s huge…

See video, they’ve got blue tarp year round against the rain and there’s a music system and BBQ which are used almost year round… I don’t mind the BBQ unless they start burning their waste as well (plastic smell has been around several times).

I can’t believe it’s that far away from my house it sounded like it was next door. Shows how loud it was and how much the sound travels in our area! I spoke to the police (which I didn’t want to have to do) who wouldn’t shut it down and they obviously directed me back to the council. The council who do nothing…

Has anyone ever heard of the Lewisham Council noise team successfully doing anything? Genuinely curious. I realise the councils have quite strong powers and can eventually get court orders and then jail if those aren’t complied with. But I’d like to know if they ever go that far.

Ah, is that what this little oddity on Google Maps actually is then: 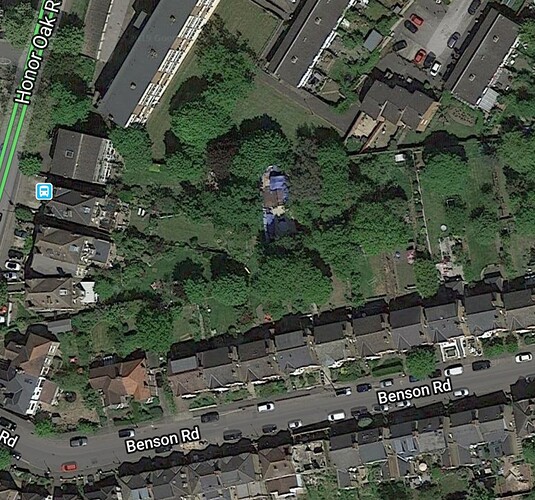 That’s it yes… looks weird indeed, but it’s like a party place!

It may be a commercial concern. I.e they run paying parties, what used to be called ‘blues parties’, which is why it’s a semi-permanent structure and frequent.

We’re looking to move into FH around this area and I noticed that along with this thread there are a few mentions on the forum of a party house on Benson Road. Does anybody know if there are still issues with noise complaints with this property? I wouldn’t be too concerned for myself, but we have a little one who is a rather light sleeper!

Apologies again for my neurotic post; we’re really looking forward to moving into the area

Not as much as last year, but that’s probably due to Covid-19… they’re currently building a shed type building which I think will be used in the colder months by lots of people…

Thanks for getting back to me so quickly Bastiaan. Do you think it’s worth avoiding buying on Benson Road and the immediate roads around on that basis? Do you know if it’s just someone having a private party every now and then or if it’s something more commercial and frequent, and have the council not done anything given the noise complaints?

Unfortunately the council has done nothing about the noise complaints.
I’ve added an image that has the source of the music. The houses around it act as a barrier because they’re higher up. So anything on the left of Honor Oak is fine (apart from the road itself haha).

To be honest over the last few months there’s been a lot less noise coming from there, but that doesn’t mean there won’t be any in the future. It’s not a commercial thing I would say and more like private parties. 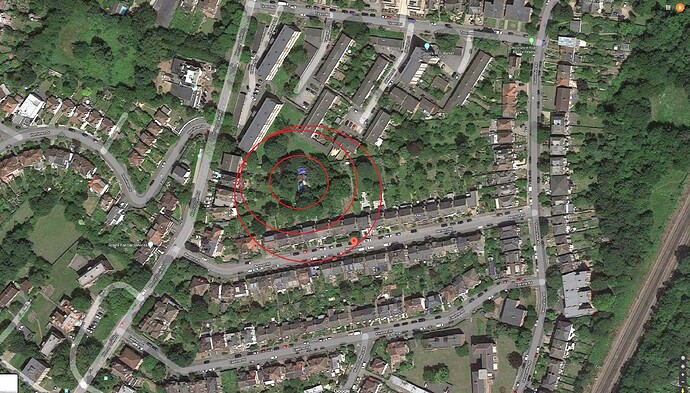