A bit of a history question, for those who like such a thing.

Most of us probably know that the railway line through Forest Hill and Honor Oak replaced the early 19th century Croydon Canal.

I noticed on a walk the other day that a building on Stantead Road, that for many years housed a series of food delivery businesses of varying natures, has been nicely renovated. It is now called “Lock Keepers’ Cottage” and it is the building closest to the line on that stretch of the road.

Is this just marketing to sell property, or is there any historical fact to match the claim? I wasn’t aware that much existed to mark the canal’s history in the area (bar a remnant in Dacres Wood Nature Reserve).

On that note, are the few houses on the same stretch of Stanstead Road on the Eastern side that have stable-door openings also related to the horses of the canal towpath?

Just wondering as a curious neighbour.

Well it is possible but I have my doubts. I think it was normal practice to have the lock keepers cottage by the lock:

I know the lock keeper’s house at Honor Oak is sadly long gone.

Re stables, that is an interesting possibility. The Dartmouth Arms was a canal-side pub originally and am sure the horses would have needed a local hostelry too.

Thanks @Brett - that’s a fascinating map and a great way to use Google Maps.

I knew about the wider ‘lake’ on St. Davids road but had not appreciated how the canal path diverged so much from the current railway line at that point.

You are absolutely right, there is no way they would put a lock keeper’s cottage so far from the locks and the canal, so it must be pure invention.

As for the stables, they could have been post-canal as well, for similar reasons as these are on the wrong side of the canal from the Dartmouth Arms and that does not seem likely. It does make me wonder though

Here’s an image of one of the houses:

Oh, and for future reference, spell-check does not pick up potentially embarrassing typing errors, such as leaving off the initial “c” in canal.

Re St David’s Road ‘lake’, I suspect that this was a winding point. That, IIRC, is canal speak for where you can turn your narrow boat round.

Re St David’s Road ‘lake’, I suspect that this was a winding point. That, IIRC, is canal speak for where you can turn your narrow boat round.

so even in those days they had joyriders doing handbrake turns on David’s Road, heh?

@Brett Superb find with that map.

Wow never knew about this canal. Really amazing! Thanks @Brett. My Mum lives on a boat on the Kennet & Avon, had to go help her do the Caen Hill Flight the other day 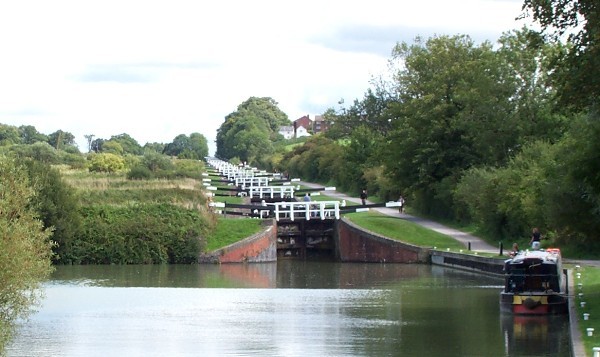