According to the details on the post box outside W H Smith the collection time Monday - Friday is meant to be at 5.30pm. However at 5.20pm yesterday the next collection was already showing as “FRI”. Luckily the mail van was still parked outside and almost straight away the driver came out of Smith’s having obviously collected the mail and parcels from the post office upstairs. When I queried why the post box had already been emptied before 5.30pm he told me it was now being collected at 4pm and had been for “a long time”. However when I asked how customers were meant to know about the change when the box shows 5.30pm he couldn’t give me an answer. Luckily he took my envelope but thought I would warn anyone relying on a 5.30pm collection.

Unless anything has changed the box is emptied by the person who is collecting all mail from the post office as well so I don’t know if the guaranteed last posting time for the post office has changed to 4pm as well (it used to be 5pm) even though yesterday everything appeared to be collected at the usual time!

That’s funny as the last 2 Saturday’s when I’ve posted in my nearest postbox in Sunderland Rd the next collection has shown as “FRI” as well but I just assumed they hadn’t changed the tag to “SAT”! I know the mail must have been collected last Saturday as my friend thanked me for their Birthday card when I spoke to them on Monday. But it’s strange you’ve come across “FRI” tags on a Wednesday afternoon. I know the collection times on a lot of the local post boxes (including the one on Sunderland Road) were changed to much earlier times a few years ago. However although the one on Sunderland Rd shows the collection times as 9am weekdays and 7am Saturday nothing seemed to change and they carried on collecting at the original times of and 5pm and 12pm (Saturday). In fact not many months ago I arrived just as the box was being emptied around 5pm and queried it with the postman who confirmed it was usually emptied around 5pm! I know there may be some disruption if they are short staffed due to Coronavirus but I would have expected the one outside Smith’s/Post Office would remain at 5.30pm to match the Post Office times.

My local pillar box in Woolstone Road reads collection at 5.30 p.m… But I have gone round at 4.45 to post letters and the plate has shown the next day.

Thanks for your info. Out of interest has that happened before or after Coronavirus may have affected staffing or both?
.

It happened two weeks ago on Friday 26 June.

It’s understandable that schedules cannot be maintained during the pandemic, but some notices would be appreciated.

Another thing arguably needing more urgent attention is the size of the slot in letterboxes. In a time of pandemic, I will have to go into the post office tomorrow to post something which is large but below the maximum Large Letter size. All I need to do is post something: I have a weighing machine and stamps, so the item already has correct postage, but it won’t fit in my local boxes on into the box outside W H Smith.

Could you use DPD or UPS as an alternative? I believe the UPS pick up points can also do drop off, if booked via their website, though I’ve not used it in these recent times.

However, if you are returning something with a prepaid label, like I was on Saturday, Royal Mail might be the only way. At least the WHSmiths seemed well organised with 12 people at a time and good markings on the floor.

I agree about the size of the letterbox slots! Even greetings cards that come within the permissible standard letter size are often square now as opposed to rectangular and I have to bend them to get them through the slot of most letterboxes!

Some pillar boxes have larger posting slots than others. But I cannot remember which ones.

Corner of Mayow Road and Burghill Road has a large slot.

This may be a very big ask, but could you possibly measure the width? Standard seems to be 8" with some older boxes just 6" e.g. the antique at the corner of Benson and Devonshire. The box outside our main post office (W H Smith) is just the standard width of 8". There’s a wider slot in the box upstairs inside the shop.

I queued for 15 minutes by the South Circular today just to post a pre-weighed and pre-stamped item.

As people do say there’s an app for everything, I did go and have a look to see if there’s one with pictures of postboxes. Apparently there was a bit of a kerfuffle about providing an API for postboxes in case of terrorism but there are a few websites that show data - some of which include the times of collection but none of which have pictures or mention the width of the slot.

Streetview doesn’t help either as most apertures (as the Royal Mail officially call the slot) face into the pavement so you can’t see them from the Google car. But did discover one at Mayow/Burghill is a modern Type K - but although various sites tell you the dimensions, the aperture size is one that none of them think is relevant. Even the Letterbox Study Group comes up blank… if @se23blue does measure it, we might be the lone site that shows it!

I think the slots outside a normal post office are larger.

Over in SE22, I’ve seen some boxes labelled as ‘Priority box’ where they’re guaranteed to be collected on a daily basis.

I think these we created particularly for the crisis to ensure mailed in tests were collected daily. There is one at the Royal Mail office by the Perry Vale carpark.

Not the ones outside Sydenham PO

I measured the Mayow/Burghill slot and it does indeed have a wider aperture - 10" - useful to know.

I’m probably being a bit nerdy here, but I found it interesting that Open Street Map once had a proposal on tagging more data on postboxes.

It looks like the plan was abandoned, but some of it has been tagged in the data, even collection times too (though that data may well be inaccurate, especially now). The post_box:type still has a ‘meter’ value for the big ones that were used for franked mail and have big slots, but I don’t see any around here - I expect they may have been removed as a security risk.

Anyway, local data on postboxes from Open Street Map can be viewed on a map here:

Here’s an example picture in case that site breaks: 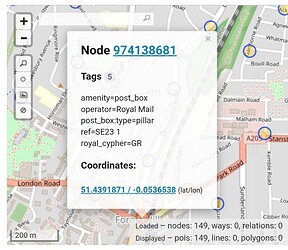