Is there anyway we can engage effectively with the local police on the wave of moped crime that seems to be occuring? I know they would like us to phone 101 or 999, but frankly, this is both impractical and pointless. I’ve tried to alert them via twitter, but they seem to be more focussed on feeding the information through the official channels than creating a repository of information which could be used to build up a picture.

For example, I saw a red Vespa going down Perry Vale at 3.30pm today and the passenger had no helmet. It was side on, so I don’t know much about the vehicle other than the colour and the fact that it had two people on it, one of whom was a young black man with no helmet. I tweeted this information to @MPSPerryVale and was asked to call 101 in reply. Having called 101 before for my own purposes, I know the wait time is a good 10 minutes and the chances of getting an officer out are nil. As a self-employed father of two, I have far better things to do at 3.30 on a Monday afternoon than wait for a disinterested police representative to log a call whilst the miscreants in question were already halfway to Bromley. However, rather than just getting on with my life, I thought a tweet would at least log the incident publicly and provide information on the vague off-chance that someone somewhere was trying to build up a profile of the neer-do-wells.

In response to my complete disinterest at calling 101, an officer did offer to meet and discuss, so rather than using it as a springboard for my own personal gripes, I thought I’d use the hive mind to see if we can find a better way of reporting these events to police than wasting all our lvies trying to call a non-emergency number so that someone can say they’ve received a call. Building up a profile (via twitter?) is clearly a better use of police time than answering calls on seemingly random events in my view. Does anyone have any alternative suggestions?

I started logging something bike-related I saw on Friday, to test it, but must have struck a particular combination on my keyboard and lost all the information I had input. Not sure I can be bothered doing it again…

Anyway, back to your question. I can understand both sides re the use of Twitter. We want something quick and easy for those ‘not important enough to call 999 or 101 but might be useful for the police to know’ pieces of information. The police want to use Twitter as a means of outward communication with maybe a bit of lighthearted interaction with other users. Practicably, we can’t expect them to monitor their Twitter feed throughout the day, on the off-chance that a member of the public has logged something important. They don’t have dedicated social media staff who spend all day on Facebook and Twitter. And they would have to log the information in their own systems which would be administratively time-consuming. Plus the information may not have specific details that they need.

That reporting website is asking for information that the police know to be relevant (eg road conditions, amount of daylight etc - although that’s more relevant to a traffic incident rather than suspicious bike riders) plus the burden is on the public to enter the information, not a 101 call handler whose time would be better spent dealing with calls that need a response rather than typing up information someone is communicating via telephone.

In the past I’ve e-mailed PerryVale.snt@met.police.uk with that type of information, but thinking about it now I’m not sure how integrated they are with other police departments, eg would the information in the incident reporting website be relayed to just the traffic police and not the local neighbourhood team?

I see there was a Twitter post asking for sightings to be reported, via 101. Don’t think I would bother ringing with my ‘just in case it’s useful’ information from Friday evening to maybe I will give that website another go.

So I retyped my entry into the traffic incident reporting website. Tip: if you’re just reporting a sighting, delete the bit for ‘Other parties involved’ and just move straight to the text box to enter details of the incident. And maybe type the text into Notepad or something first, in case you accidentally delete it like I did!

And this is what I saw at about 8.15pm on Friday evening:

I was walking south along Perry Vale and two bikes drove past me heading north. The first bike had two people; the pillion passenger wasn’t wearing a helmet, he had a black balaclava on. A minute or two later I became aware that they were now driving south but had driven into the access road in front of Perrystreete flats and were driving along there. They emerged back on to Perry Vale and the first bike rejoined the road but the second bike drove along the pavement for a short distance and then they both turned right into Dacres Road.

I agree, I am fed up with the amount of balaclava mopeds along my road. I don’t feel like its really being tackled in a good way/ at all. I will use this reporting site though from now on, so thank you for highlighting it to me.

Its such a balaclava/moped cut through along: Stanstead Road - Beadnell Road - Garthorne Road - Grierson Road- across Honor Oak Park to other other side of Grierson Road. No car can go that way because of the stop gates so they know they wont be followed, and its off the main road so probably actually faster!

I received this by email from @CroftonParkSNT (who recommend the same website as suggested by @blushingsnail):

We are aware that moped crime and moped-related anti-social behaviour is becoming more of an issue in Crofton Park and across London on the whole. If you witness someone committing a road traffic offence, for example riding a moped without due care or attention, or riding on a footpath (for example, Eddystone Bridge!), or without a helmet, do you best to get a photo/video of the offending vehicle’s registration at the time of the offence and report it here:

Or you can go the Met website at http://www.met.police.uk

This central reporting system is much more effective because it goes directly to the traffic unit. We recently received such a picture and report from a local resident and a prosecution will be sought against the offender. Help us help Crofton Park.

The problem is, these mopeds most often don’t have plates. I was passed dangerously by a moped on Sydenham Road today and watched it run lights and cut across traffic. No plates.

Yes, its becoming rife. My hubby is always on the look out now because hes a biker. He just calls 101. There was one guy he thought looked dodgy at fh highlighted it to passing police. They nicked him as he tried to run.

I’ve had two rather frightening moped magia experiences, the first being about a year ago in Clapham South, we were stopped at red traffic lights and around ten bikes pulled up either side of us banging on the window wanting us to drive through red lights to allow them through. Then more recently about two weeks ago I was walking towards my car parked outside Crofton park station which is a one way street and nearly got mowed down by one of them speeding down the middle of the road the wrong way! They set out to intimidate - surely this is classed as threatening behaviour and should be cause for arrest?! Also just want to mention to all the ladies please be aware when walking home at night I was followed and approached by a weird guy walking from ladywell station to Crofton park station where my car was parked last night around 11pm.

I think we need Sergeant Biddle to comment on this thread. ARE YOU THERE SARGE !? 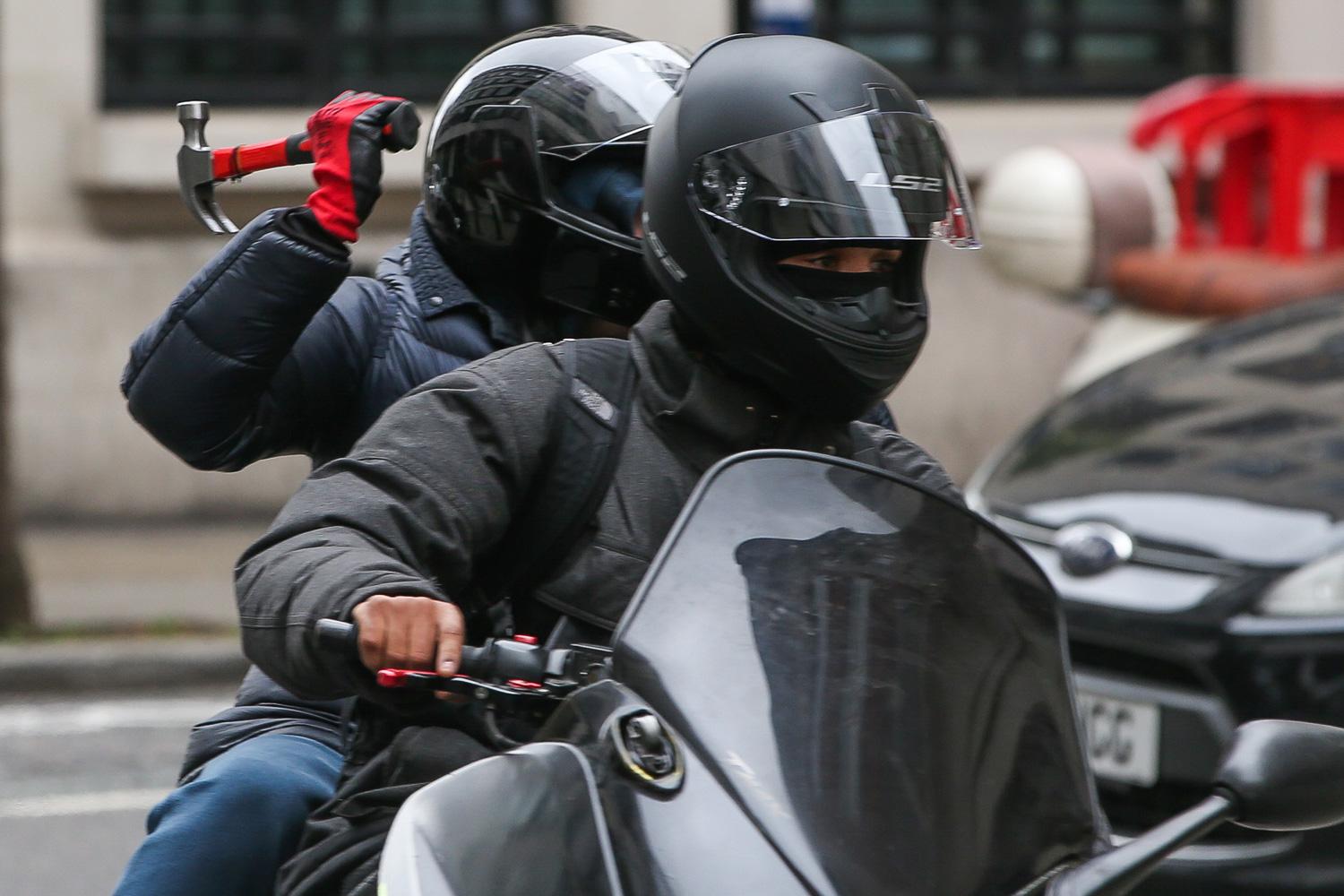 Police smash one of London's most prolific moped crime gangs

One of London’s most prolific moped gangs responsible for an extraordinary crimewave of 103 offences in 18 days has been smashed by police. The teenage offenders – aged 15, 16 and 17 – grabbed phones from pedestrians in Westminster, Camden,...

Not quite local but almost. Video doing the rounds of 2 moped drivers pushing a cyclist off his bike which they then attempted to steal. This was outside the old police station in Penge High Street.
Cyclist is in hospital with a broken foot: riders got away but registration of one moped is clearly shown, and their faces, albeit mostly covered.

Someone had apparently seen them earlier and dialled 999 but don’t know what happened in response.

This was at 6 50pm yester day in broad daylight and in front of quite a few passers by.

Warning: A moped attack just took place on Brockley Rise at the bottom of Lowther Hill. I heard screams from my garden and ran round. An older lady and her daughter were attacked by two men on mopeds whilst they were crossing the road, the older woman was knocked down and pinned to the ground in the middle of the road, her daughter (in her 20s) was attacked with a penknife. The mopeds then sped off up Lowther Hill. They’re not badly hurt, talking but in massive shock obviously. Police on their way now.

I read that as well. I pretty much live right there. I suspect they go up Lowther Hill so if need be they can shoot across Blythe Hill

I’m not sure what the answer is but it does feel like we have reached a tipping point.

It’s the same as the London riots. The police were told not to use force and not to engage rioters. So they took over the city for a couple of days. On the Sunday night the PM rushed through some sort of order that permitted police to use force/batons and guaranteed they would not be prosecuted. Guess what… The riots ended almost immediately.

There were a few other factors like weather. But I reckon that was the main one.

Did anyone see the video of the thief on a bicycle and slammed the car door in to him to knock him down? Police should be permitted to knock down moped thieves with their vehicles. If they suffer serious injury or death then that should not be on the police. If they want to mount the pavement with a moped, that’s a deadly weapon. Then they will know the consequences.

guaranteed they would not be prosecuted

Did this really happen?

No. I can’t find a source. The immune from prosecution part I got wrong. But they were authorised to use force if necessary on the Sunday. But not before that. The incident took place on Ladywell Road in Lewisham, London, on July 6, and was caught on dashcam from a car behind.

The Penge incident is in the Standard:
https://www.google.co.uk/amp/www.standard.co.uk/news/crime/moment-brave-passersby-foil-violent-moped-mugging-in-london-a3590136.html%3Famp

Mmmm, moped with two idiots v just over a ton of Porsche. I know who would win that one.