“Mutiny on the trains” 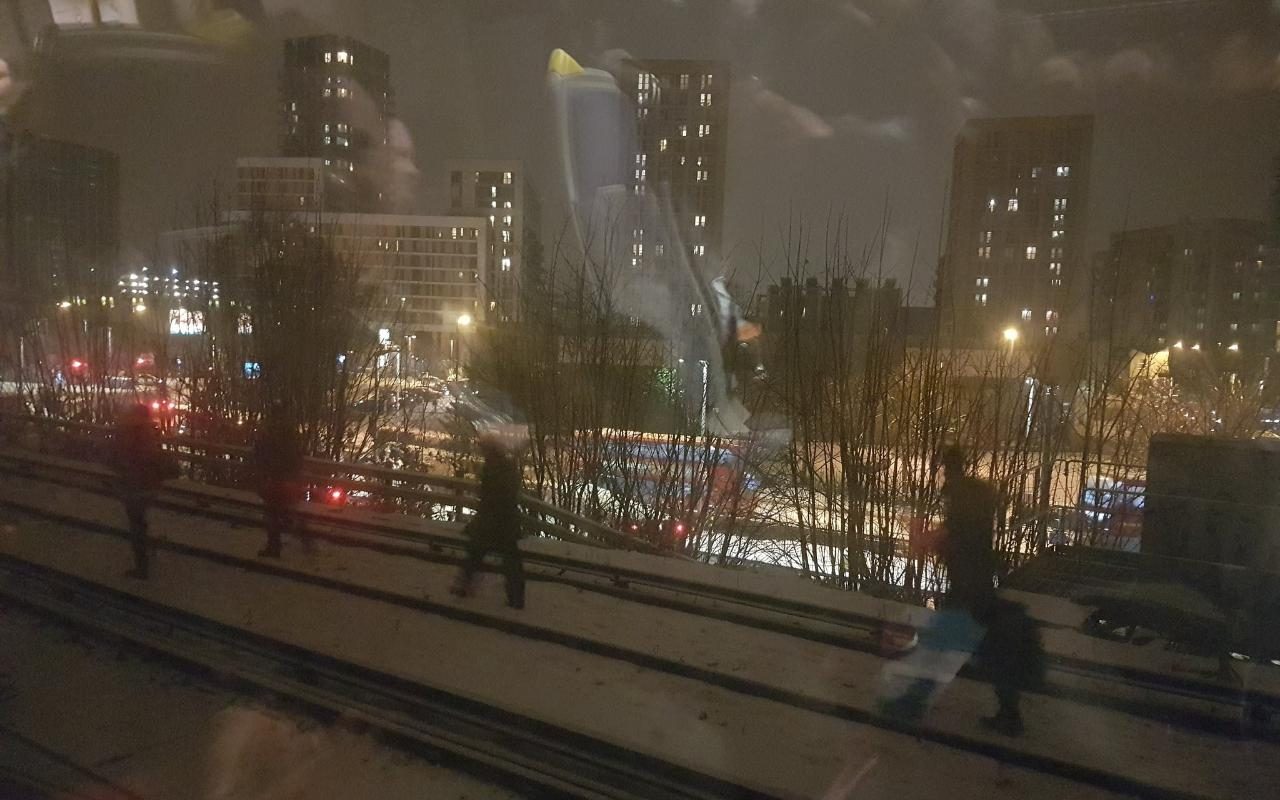 Mutiny on the trains as passengers press emergency buttons and jump out onto...

There was mutiny on the trains on Friday night as passengers fed up with delays decided to take matters into their own hands and jump out onto the tracks.

Trains in south-east London were held up after a passenger pressed the emergency button and got off when their train was held outside a station.

Southeastern Railway said the situation was getting worse “because several people are jumping off trains onto the tracks”, warning that it would only cause further delays. 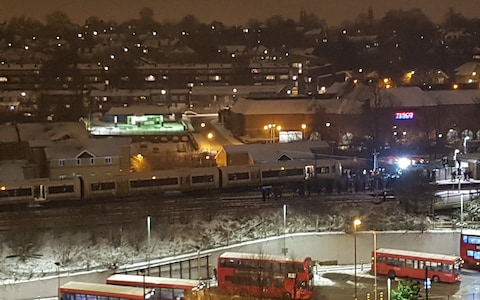 Southeastern said on Twitter "All routes through Lewisham are now at a stand after a passenger held on a train outside the station, operated the emergency door release and went onto the track.

“As a precaution, all lines through the station are currently blocked and no trains able to run. Please be patient.” 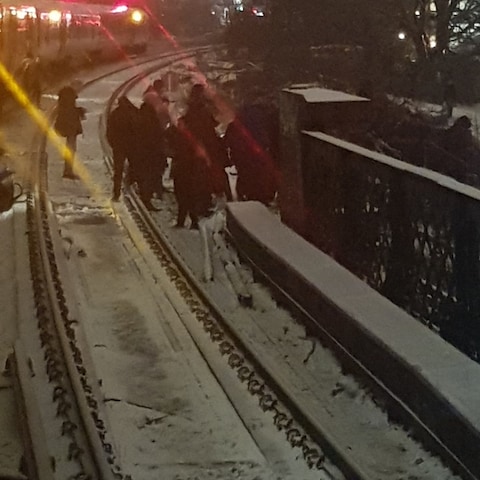 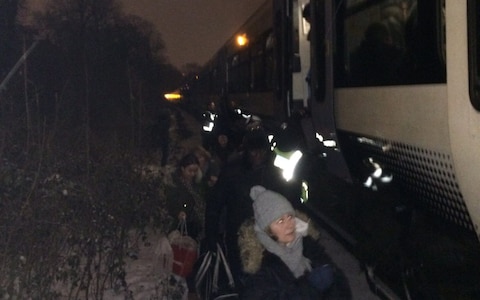 Passengers were letting themselves off Southeastern trains CREDIT: @BILLYQUITH/TWITTER

The railway operator warned passengers not to try the same thing, saying “it’ll make it far worse for EVERYONE and you won’t get home any quicker”.

The police and fire service were drafted in to help deal with the disruption.

#LEWISHAM - Situation now getting worse because several people are jumping off trains onto the tracks. Please remain on the trains - we'll be able to get you moving again far quicker if you do 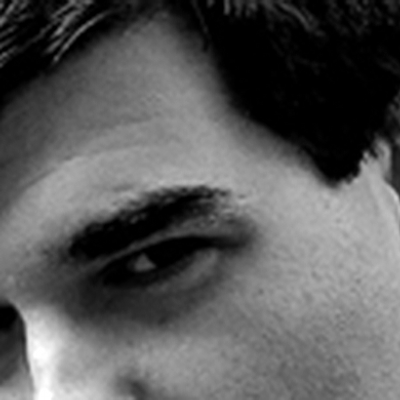 .@Se_Railway someone is breaking down the toilet door...we are on the train stuck outside Lewisham...the one with no power... https://t.co/OPjKZoXtdB

The incident caused power to be switched off on the trains.

“If you’re on a stuck train outside a station and tempted to leave the train. DON’T! We won’t run trains thru the area until we know everyone is off the track - the more people on the track, the longer this’ll take. If you see someone about to do it, TELL THEM NOT TO”, Southeastern tweeted. 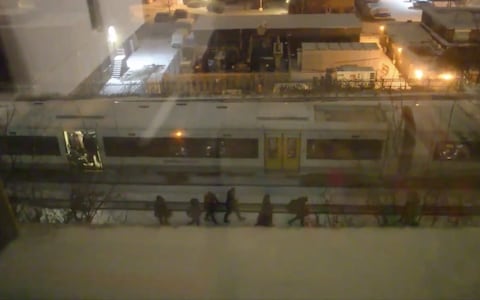 Many people chose to walk along the tracks rather than remain stuck on their trains CREDIT:@V0IDAL/TWITTER

A Southeastern spokesman said: "There are currently severe delays to trains in the Lewisham area following a serious trespass incident.

"Several passengers have forced open the doors on a train and disembarked while it was stopped outside of the station.

"We’ve had to turn the power off for safety reasons, and Southeastern staff are currently working closely with Network Rail and the Police to clear the trespassers from the tracks so that we can get trains moving again.

"We completely understand that passengers on delayed and busy trains may be frustrated, but they simply must stay on the train for their own safety.

“These trespassers risk being electrocuted by the ‘third’ rail or hit by other trains. They’re also causing significant further delay for other passengers that our staff are working hard to get home.”

Presumably those daft enough to both have taken part and tweeted about it could be prosecuted and fined.

Beautifully put mate. Some people just need to be told about themselves.

Some real princesses on Twitter tonight whining about this I must say.

It’s a side note, but I think it’s interesting the way this is being reported with words like “mutiny” or “rebellion”. I think this sort of thing gives an act of criminal trespass and utter selfishness an undeserving glamorous air.

The SE railway twitter account (from what I saw) was really good at responding to things and providing updates. I worry that as consumers, we can all be a bit unsympathetic when we see a crisis. Is waiting on a busy train for an hour really so bad? It’s inconvenient and obviously we’d all want as much info as we can get in such a situation, but it’s not like being locked up in the Bangkok Hilton prison, is it?

Reflecting on it, I’ve felt some cognitive dissonance myself this week - I didn’t expect my boss to demand me in the office, but I’ve expected others to keep working through challenging circumstances.

And obviously there are engineering issues with London trains below a certain temp as a result of decisions made in the 1920’s. But at the end of the day, this happens so rarely that we maybe just need to roll with it.

My friend was on that train and sensibly stayed put. She was rewarded with a message from Luke Skywalker! 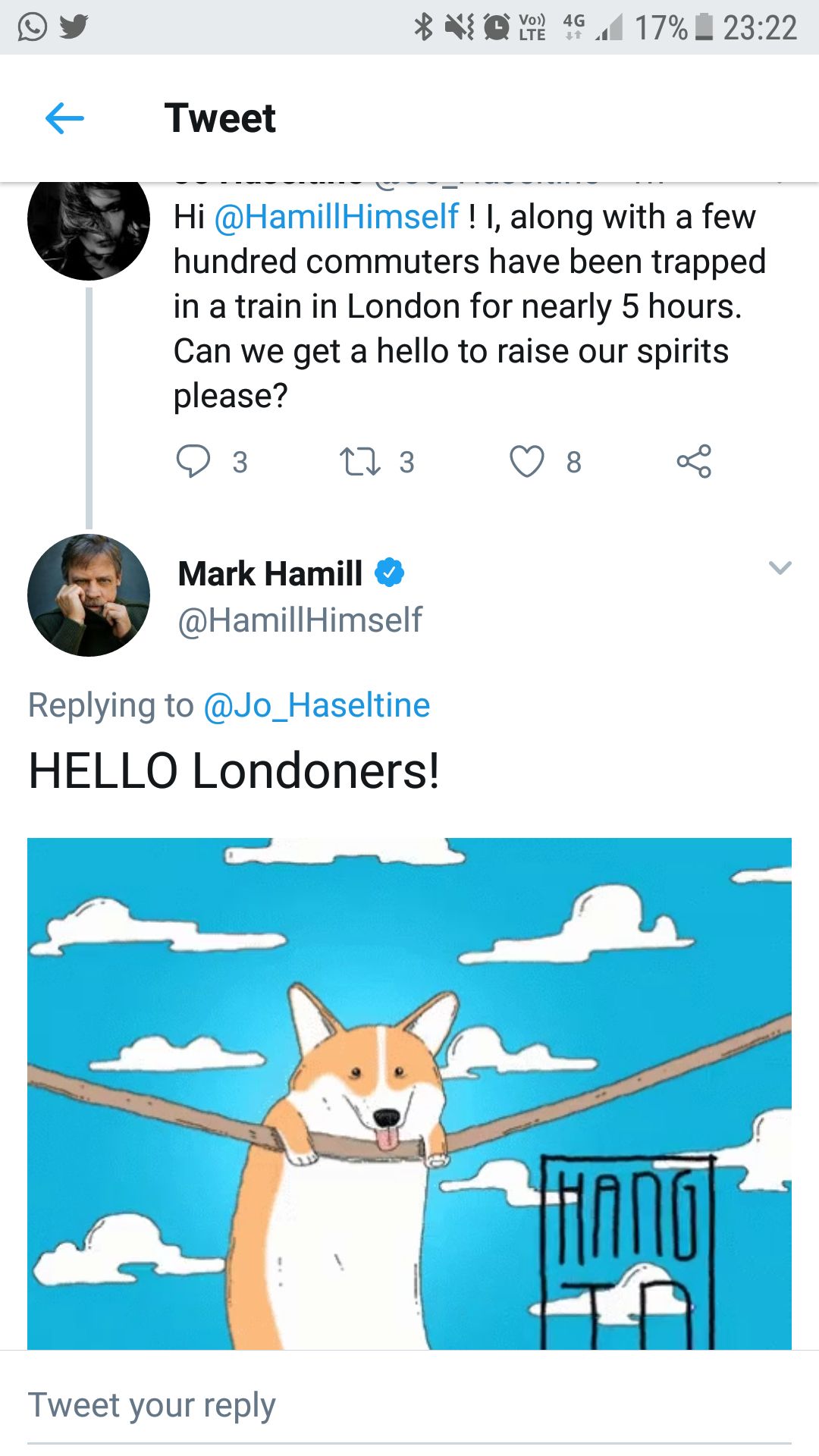 I think it’s easy from the comfort of our own armchairs to say they should have stayed on the train and how selfish it was of them to get off. I have read other accounts of what happened and it sounds horrible. If you had been forced to stand squashed up next to other people for 3 hours with no access to a toilet, no way to sit down, on a cold dark train, no idea how long the ordeal would last, with very little communication from train staff and the station in sight just a few feet away, you might do something irrational. For anyone with claustrophobia it must have been hideous. It was an awful situation that shouldn’t have happened in the first place. So I am not going to judge because it wasn’t me who had to endure that.

And the you get off and stand on a live rail. Still, they got off but what about the other people on other trains who now have to suffer further delay whilst suffering the same conditions?

So this is the time line I have been looking for. 1 hr 10 mins from the initial stop, to the first person getting off.

Due to the first person getting off, the rest of the situation unfolded.
Not sure what the flow of information was like from South Eastern during that first hour, but judging by their twitter feed, I would think not too bad.

I agree it is easy to be an armchair spectator, I know, however had there been any medical emergencies during this time, I am sure LAS HART and LFB would have been happier dealing with a much smaller scale evacuation of a patient.
Unfortunately they were all caught up in a massive effort last night.

A Network Rail spokesperson said: "At 5.35pm this evening, a train came to a stand near Lewisham Station due to ice on the conductor rail.

Our team were on site manually de-icing the rail when at 6.45pm passengers began climbing off the train and onto the tracks.

I don’t really think this is an easy situation to be overly judgemental about unless you were on the train. Of course we all know what the correct behaviour is in that situation and would like to think that’s how we would respond but it was a pretty extreme and awful situation for all those passengers. From photos I have seen it looked like an already overcrowded train - I get mildly claustrophobic standing on crowded trains and on the odd occasions a train has been held up for even say 5-10mins (e.g. waiting outside London Bridge during the refurb) I’ve struggled with a feeling of impending panic attacks / light headedness etc.

Now imagine that situation - overcrowded train, not moving for OVER AN HOUR, no information forthcoming - and throw in no power, freezing temperatures and no access to toilets or drinking water etc. I don’t want to imagine it because it’s literally one of my worst nightmares. I agree that the actions of the people who jumped off is dangerous and selfish, but I couldn’t swear in those circumstances I wouldn’t have reacted the same way once a few people had done it.

I think there’s a wider question of if/when trains should be running. I think Joey H mentioned that the advice was not to travel unless essential - but what does that mean really - is getting to/from work essential? Either the conditions were safe for South Eastern to run the service or they weren’t and from the accounts of the people on board their management of the situation was utterly shambolic.

Subtle change in Southeastern Trains posture in a report on the BBC website.

Southeastern has apologised after Friday night’s train incidents at Lewisham.

“We understand the conditions were extremely difficult for them …”

They also make the point that those passengers who evacuated the trains posed “a significant risk to their safety”.

The independent Rail Accident Investigation Branch will conduct its investigation - hence the change.

Latest updates as travel disruption is expected after days of heavy snowfall.

Perhaps all judgements should be held in abeyance until the RAIB reports on the facts of the matter and on who did what and to whom.

@Joey_H any idea why the train couldn’t crawl along at half a mile per hour until it reached the platform to let the passengers off?

The RAIB will almost certainly ask that same question.

At least one report says that track engineers attended on site to de-ice the third rail some 80 minutes after the first report.

So for that train, creeping forward probably was not an option whilst track engineers were present.

From what I was reading it had no contact to draw power through. Probably got that wrong, but was the impression I got. The line was live, but the current couldn’t pass into the train.

A lot of the comments above were saying that people getting off the train meant the 3rd rail had to be shut down thereby killing power to the train. But if the train had no electrical contact with the 3rd rail, then already there would’ve been no power inside the train.

Was the issue that it killed power to that train or to other trains behind it on the line? In any case, people on the train (and we armchair commentators) wouldn’t be in a position to know what was chicken and what was egg in terms of denying power to the train, weather or passenger action.

If it is true that engineers were manually de-icing the conductor rail then it seems likely to me the power was isolated already.

I agree that waiting for the accident board investigation report is prudent before drawing conclusions.

Civil disobedience is sometimes justified and sometimes productive. I was in Paris one Friday afternoon, waiting for a train. Regular users of the service were complaining that as usual the train had too few carriages. Several of them got down on the track blocking departure of the train. The station master came and remonstrated with the protesters. The upshot was that an additional carriage was shunted round and fixed to the train. No hysteria, no arrests, no accusations of trespass. Everyone got a seat and the train even managed to make up some of the time from its delayed departure.