This leaves us with only 2 trains an hour on Saturday and a bit of a mystery on Sunday (see below which I’m trying to get clarification on from Southern! 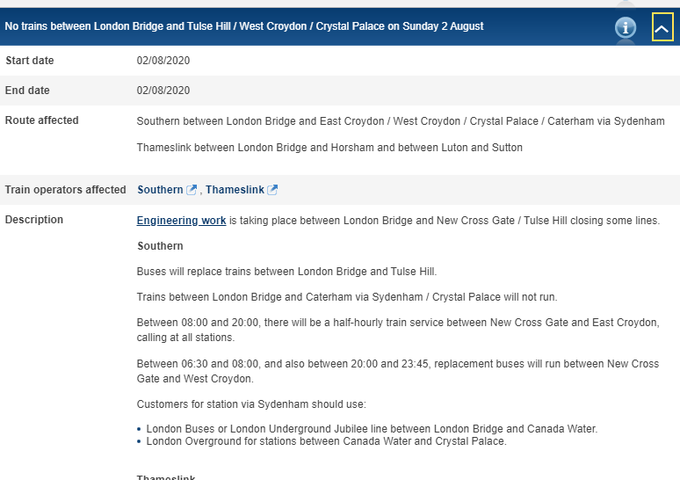 This indicates we should have a half hourly rail service to/from New Cross Gate/East Croydon from 0800 to 2000, and replacement bus services between 0630 and 0800 and between 2000 and 2345. However neither the National Rail Enquiries Journey Planner or Southern’s show any of these services at all! And they don’t show any services running from New Cross Gate to London Bridge either. I suspect they expect people to walk to New Cross for South Eastern services! I’ve therefore asked Southern to confirm exactly what is running and will update when I have a response!

UPDATE: 31 July 1030
Although Southern have advised they are investigating the issue I raised with them yesterday I haven’t heard any further from them yet. However on checking National Rail Enquiries again this morning they are now showing bus or train services to New Cross Gate and East Croydon depending on time with connecting services elsewhere. It’s rather complicated to summarise so I would recommend anyone needing to travel on Sunday checks National Rail Journey Planner!

The weekend shutdowns on London Overground look likely to continue until the bank weekend of 29/30/31 August. .

I just had a quick look at TfL’s engineering work calendar and it looks like there’s going to be no overground service from Forest Hill every weekend for the whole of August.

Yes I saw that TFL have now added the bank holiday weekend of 29/30/31st August as well but the engineering work details on TFL and National Rail Enquiries do not match for the last 3 weekends in August so I was waiting until closer to the time to update my original messaging. However I’ll now amend warning this may extend through all of August. The bad news is it looks like we’re in for 6 weekends of no trains at all starting September 19th when there’s engineering work on our part of the line from New Cross Gate!