Really strange. Walking along Woolstone road and Perry Vale and the roads and footpaths have splattering of what looks like fuel/ oil. It’s quite extensive - it’s not everywhere but a lot of puddles have a haze. Have reported on fixmystreet but wonder why it’s happened, given it’s everywhere.

very strange- if it is widespread over an area where can it can come from? Is it in also areas that are not adjacent to a road - eg in puddles in parks and gardens I wonder?
one possibility - aviation.

It returned to the airport

It’s gone now - think all the rain has nearly evaporated. It was on Kilmorie too. It could be something like this as so widespread buts it’s really not the done thing to dump over residential areas so think we’d have known about it. So strange. 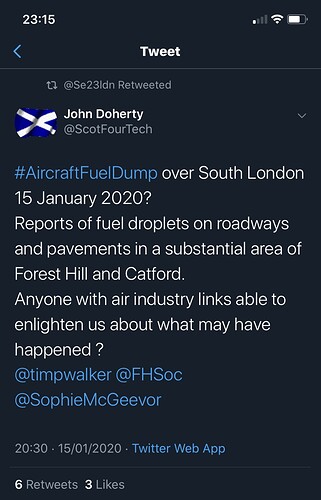 Seems it wasn’t just me that noticed this. So strange.