Pheasants on the high street 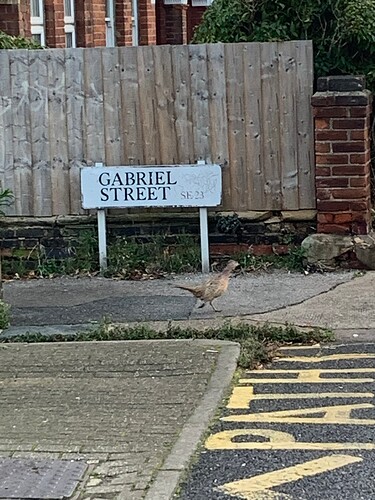 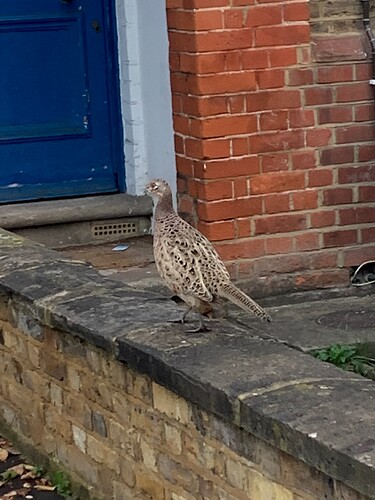 I’ve not see one myself, but there have been reports and some other photos of them around over the last few years!

Yes, they’re being seen more and more. One theory is that the heavily vegetated railway lines act as ‘motorways’, alllowing them to spread deeper into towns and cities. Unfortunately, it seems they don’t last long and rarely if ever breed.

Nearly 50 million young pheasants are released every year by the shooting ‘industry’, and only a fraction of these will be shot. The rest are left to roam and become easy prey for predators.

One depressing aspect of going for lovely autumn walks in the countryside south of London is hearing the nonstop bang bang of shotguns. Why people get there pleasure from blasting the life out of a creature that’s barely a few months old and has been bred in captivity is beyond me…

There was one in my back garden recently.

I literally just ran over one in Nunhead cemetery - it jumped out from a bush and I jumped over it!

This sounds like a plot out of Buffy the Vampire Pheasant Slayer. Glad you are okay.

They were mentioned in Non-human visitors & residents of SE23.

When I first read this I was worried you’d gone over one in a car! Perhaps suggest this as training for one of our future Olympians aiming for world 100M hurdles glory - or maybe a future Rocky film - chickens out, pheasants in.

It’s called wildlife management and/or conservation. Me and my dad shot, plucked and dressed over thirty pigeons this last weekend. They taste delicious. So does pheasant if brined properly. Although personally I prefer to shoot rabbits, pigeons and pheasants in the head with my air rifle over using dad’s 12 bores due to the fact that he has a loose choke pattern and the birds can sometimes end up filled with shot. Biting down on a shotgun pellet isn’t nice.

There’s nothing ‘wildlife’ or ‘conservation’ about releasing millions of young pheasants into the environment each year.

Young pheasants who’s only reason to exist is to be blasted by a shotgun by someone with a lust for blood. I’m not a vegetarian but I do have a problem with anyone who takes actual pleasure in killing a creature just because they want to prove how good a marksman they are. 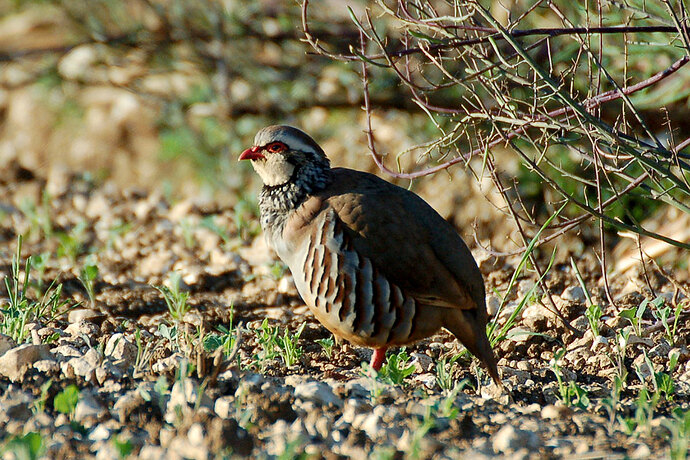 How many gamebirds are released in the UK per year?

What is the latest estimate and how accurate is it?

It says in your link that the numbers you cite are speculation, not fact.

Huh?! The exact figure is a matter of speculation, but all of the discussion is about the figure being in the tens of millions. You questioned my use of ‘millions’ – so which part of that link supports you? None of it.