Hi ModTeam, could you please update the About - SE23 Forum page to include @ForestHull in the Moderators section. Under the previous site ownership the admin role was clearly separated from moderation duty as of 2019, it now seems that Admin includes moderation rights again. Just wanted to make sure that was clear to everyone. Thanks 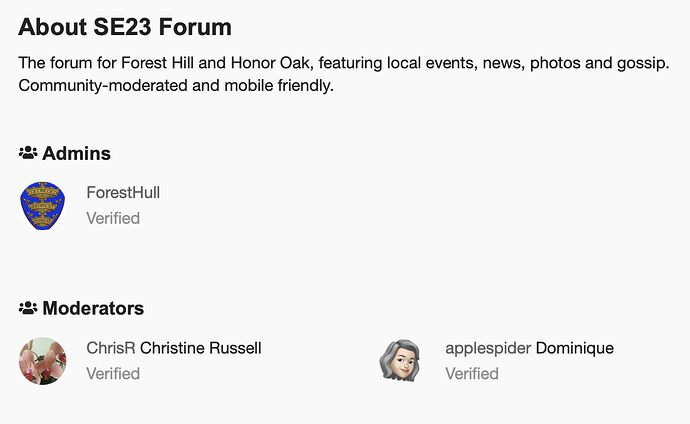 I think you only need to state it if the admin is not a moderator.

I don’t feel that strongly about it, and happy either way, but if it’s hassle to change or mods don’t have time fine to leave as it is I think.

I think it’s pretty clear when someone acts as a moderator as it’s marked - like this post - with a different background and says “(Moderator)” next to the name with a little shield next to the user name.

Perhaps it’s not clear that as admin I maintain the servers, the software, backups, email forwarders and everything else needed to run this site. As such I have moderator powers and more, though I was a moderator before taking over site ownership and admin.

As @oakr says, I think it’s a common assumption that an admin has moderator powers, through the previous admin did decide to relinquish that responsibility as pointed out.

This admin is however still a moderator, and I’ll look at getting that page updated (it is auto-generated, so a quirk of the site code no doubt).

The old and now departed admin took it upon himself to moderate topics he was deeply involved with, which more then often led to lopsided and unbalanced moderation. In that case relinquishing the moderation role was the best thing for the Forum.

I’d hope that a moderator now would defer to another moderator should he or she find themselves in the middle of a more vigorous debate, or in support of one side. Gladly that appears to be the norm now, at least most of the time.