[Poll] Does the South East need a new runway, and where? 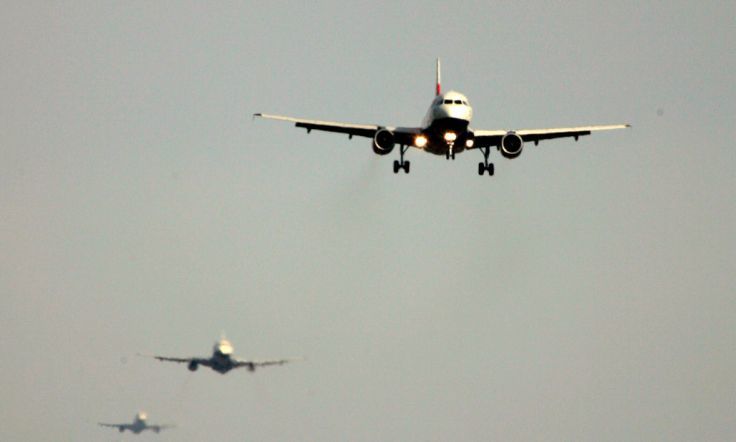 Government to build runways everywhere and let the market decide

THERESA May has announced plans to carpet Britain with runways and let the market decide.

Definitely the most Thatcherite solution…

actually the most Thatcherite solution would be akin to what she did with Canary Wharf and the other Enterprise Zones - take former industrial crime-ridden wastelands and turn them into clean, safe, beautiful and inspiring places that bring international business and investment.

Additional runways are like additional motorway lanes – they don’t just meet demand, they stoke it. We should be asking why we persistently need to be, live or work somewhere else. This will never change until the financial markets have an interest in conserving our environment. I met a chap the other night who is launching a financial bond which ‘securitises’ the country’s watersheds. He told me a single large tree can be worth £100,000 to the insurance industry by virtue of its role in maintaining the soil layer and preventing flooding. This seems to be a big step in the right direction.

Climate change is reaching crisis levels, there is no significant doubt to its human-activity-stoked advance by now. As the previous poster says, new avenues for high-carbon travel don’t just meet demand, they increase demand. What we should be doing now is trying to engage in low-carbon ways to fulfil ourselves, and cut out flying as much as possible as the number one way in which individuals are responsible for huge emissions of damaging CO2. No new runways anywhere! It’s madness!

I do not believe that this is accurate. Cars and home heating would rank above this for instance. Certainly in the context of pollution in London, which is not just CO2, traffic is a bigger problem.

However, we could site runways so that planes do not overfly so much of the population and this would have health benefits. It is also worth noting that if we don’t maintain a hub airport in London, then the air traffic will just be routed elsewhere. No nett change in pollution, for the same traffic, but we lose a big economic benefit. Gets complex.

We should be asking why we persistently need to be, live or work somewhere else

With respect, because otherwise all of human society and economy would grind to a halt. If there were no movement of people, there would be no free exhcange of ideas. You don’t have to go far to realise that everyone living and working in the same place leads to close-minded, impoverished, disease-ridden, stone age societies. The main difference between medieval man and modern man is that modern man is far less likely to be closely related to his eventual spouse and may have been further than the market town.

I agree we should find more sustainable ways to travel, but reducing travel for the sake of it is a hideous idea.

(Also, I might add that the reason extra lanes on motorways always fill up shortly after being built is that they are meeting the latent demand that was the cause of the building - if we built a motorway and it remained empty - like the M6 Toll - most would condemn it as a failure)

Well, I didn’t say we shouldn’t travel, but that we should question why we do, which might reduce travelling of questionable need or value. Commuting, for example, far from being an inalienable human right, I see as a social affliction avoidable in large measure, given some political will and, dare I say, planning.

I believe improving motorways not only meets latent demand, but increases the commutable range from London and other big cities, creates more pollution, squanders yet more person-years behind the wheel of the car which could be spent in the company of our families or on other pursuits, and extends the metropolitan distortion of property values, to the detriment of the provincial population.

Thanks for the thoughts above. It’s true that cars and other sources worsen city pollution worse than aviation, but climate change is a global phenomenon different to, and much more complex than localised air pollution. As CO2 builds up in the atmosphere, which it is doing exponentially at the moment, it feeds the current warming of the planet at a whole, leading to changes in weather, more extreme weather (Hurricane Katrina?), flooding, rising sea levels, melting ice-caps, starving polar bears, and all the rest.

We shouldn’t be ‘limiting’ travel, but maybe promoting a culture in which it isn’t done thoughtlessly, just because the means are there. And personally I don’t think commuting long distance to work actually improves people’s lives, in reality.

Just out of interest, what do we need to new runway for. I was under the impression that business can take advantage of group calling, Skype etc and that travel was costly and ineffective. As for tourism, surely there is enough carrier space already. There is also the issue (as in Venice) that our attractions are becoming very overcrowded. I was in Bourton on the Water and Stow on the Wold last month on a Sunday. To say it was overcrowded is an understatement. Surely there is a point at which our attractions become overrun?

Heathrow has more than 70m passengers pa and all these flights are serviced by 2 runways. This leads to heavily congested airspace and tonnes of fuel is burnt on taxiway and, worse, stacked up on approach because of this.

Compare, say, with Schipol: 60m pa, 6 runways and passive provision for many more. Much less noisy and polluting as the flights approach over the sea and get a landing slot much more easily. We sometimes visit friends who live in the Amsterdam equivalent of Hounslow and you can hardly hear the planes - I find them much more noticeable here actually.

We could be kinder to the environment, locally and globally, by moving our main airport to the Thames Estuary and retain London as a hub. Win-win but requires infrastructure investment which seems to be a dirty phrase in this country.

We could be kinder to the environment, locally and globally, by moving our main airport to the Thames Estuary and retain London as a hub. Win-win but requires infrastructure investment which seems to be a dirty phrase in this country.

I can think of two cities that have moved their airports successfully, Tokyo with Haneda and Hong Kong with Kai Tak. Both, coupled with very good surface rail, mean that the travel to the centre of both cities was quick and the airports were used for much needed housing. Imagine how much housing could fit on Heathrow!!

On the general topic of travel, I work for a very large bank, and they are targeting minimum 20% reduction in number of desks compared with number of staff. In other words, they want every single staff member to work from home at least one day per week (on average). This is a trend that seems to be growing rapidly, as building costs (real-estate, power, cooling, etc) are enormous (particularly in London), and Internet speeds at home are faster and more reliable, the tools for remote working are getting better, and the idea itself has much greater acceptance now.

I’d say that in another 10 years most big companies will have 40% desk reduction in place (i.e. everyone works from home 2 days per week).

This, plus the advent of electric cars and the eventual arrival of fully autonomous vehicles, will lead to the almost complete eradication of car pollution and traffic jams, dramatically improving our quality of life (unfortunately for some, it’s also going to disrupt a fair few industries). I feel lucky to be alive in such amazing times.

good luck with convincing mankind not to eat the lifeboat it’s floating on.

There’s no question about us needing more capacity it if we are to compete, particularly after Brexit it’s a great opportunity, Heathrow has all the workforce and transport links in place. Then, when the oil runs out, we can plant a great forest there.