I received a response from Ellie our MP, who contacted the over ground about weekend services. The response she received is below.

Dear Ellie
Thank you for your letter. I am sorry to read of the issues that are being caused by engineering works. These works are vital to maintain the railway, but I appreciate that this does somewhat prohibit travel across London at weekends. Level of works and disruption can fluctuate and it is not necessarily always the same piece of infrastructure that is undergoing improvement. Works can occasionally also include emergency works which mean they are unplanned and wouldn’t appear in journey planners.

Both Southern Railway and Transport for London have pages on their websites where your constituents will be able to find when planned engineering works will be taking place on that line of route. - https://www.southernrailway.com/travel-information/plan-your-journey/planned-engineering-work - https://tfl.gov.uk/status-updates/planned-track-closures.

The works look they’re intermittent through the next few months up to the end of the calendar year. I hope that information is helpful and as ever, if you have any other enquiries - please do get in touch.

What an exercise in saying nothing constructive about the actual issue - which is why have there been so many of them so frequently across multiple years.

We’re all very well aware of how to search for them; that’s why we know there are so many!

That is a somewhat useless response. I have written to Vicky Foxcroft as well. My partner has been working at weekends and found travel into London quite challenging from HOP. For several Saturdays southern have been just running 2 trains an hour into London Bridge -and they’ve only been putting on 2 carriage trains, which means the trains have been really packed when he’s been travelling.

Glad it is not just me who thinks that.

It is a standard template letter that they store on their computer and just print off and sign whenever anyone asks about the service cancellations.

I hope no trees were killed in the creation of it.

I’ve also just received this email response from the council. I am unsure what this sentence means though:

Subject to the Department for Transport funding, London Overground plan to run 100 per cent of all train services, as opposed to 100 per cent plus capacity, from the December 2020 timetable change.

Network Rail sometimes requires the rail network to be closed so that they are able to undertake essential engineering work. When this is the case London Overground are unable to operate any service. In addition the works relating to the Elizabeth Line at Whitechapel have also had an impact on the ability of London Overground to operate services. When the railway is closed a replacement bus service is offered.

Maintenance works are an ongoing requirement to keep the railway safe and reliable. Closures will continue to the end of this year and for the first quarter of 2021 after which the frequency of closures will reduce. The London Overground service is currently performing at very high levels of reliability, though it is recognised that these closures do cause inconvenience to customers and disruption.

In addition to the required maintenance work and as with other services across the London network, and indeed nationally, London Overground services have unfortunately been impacted by the COVID-19 pandemic. London Overground’s priority is to keep running as many services as possible so social distancing can be maintained.

The issues raised relating to Southern services have been raised with them, and officers are awaiting a response.

that is almost identical to the response I got months back raising this issue-just a standard reply which actually made me feel quite angry- I felt as if none of anything I’d raised was actually addressed and I got fed platitudes as if by patting me on the head (ie;responding to me at all) I’d be satisfied and go away.

Well, one thing we know for sure is that letter sending has no impact on the transport companies. I wonder what the next step is?
I mean, if I fail to pay a bill, I’ll receive a few letters, but then, the creditor will take further action…

The response is super irritating on a number of grounds:

However, what we don’t know is:

The East London Line was closed for a long time (possibly one year) while it was being converted into the Overground. Therefore, there should not be much engineering work required so soon.
Again, if work is being done at Whitechapel, this should not prevent the Overground running to Canada Water.

However, what we don’t know is:

I think it’s a cumulation of things:

Which other stations in particular? I guess (hope) that some of the restrictions be temporary due to the reasons above, but it’s also worth remembering that the line is generally well served compared to some others nearby (East Dulwich, Lower Sydenham, Crofton Park).

Not to go off topic, but referring to the thumbnail on this post, I demand to know why Watford has way cooler aero Overground trains than we do. Who can I complain to? 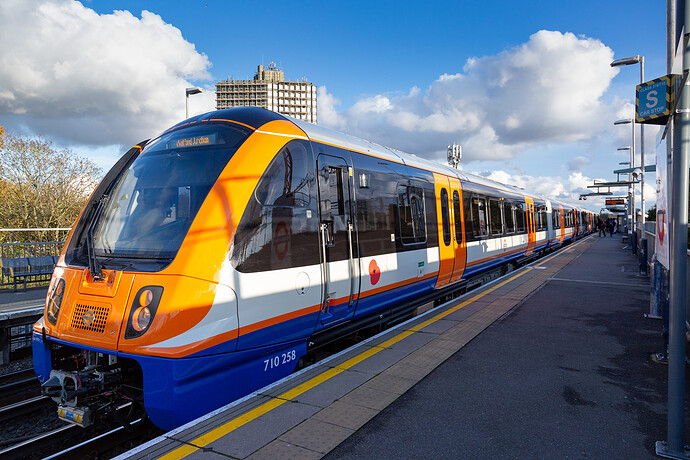 I demand to know why Watford has way cooler aero Overground trains than we do. Who can I complain to?

It would probably have to be Isambard Kingdom Brunel, for not building his tunnel under the Thames wide enough meaning that only trains with cab-end doors for emergency evacuation could use it.

Midweek I agree the service is great.

It’s probably only a minority of people who need/want to use the overground/Southern at weekends, but for those who do, the two trains an hour service is poor. East Dulwich has 4/hour at weekends, as does Sydenham Hill.

It’d be good if in future Southern do not cancel half their service at the same time the overground cancel 100% of their service.

I agree now in the midst of covid probably is a good time to do engineering works, but then can we have confirmation that as of Jan 2021 they’ll be no engineering works for (I don’t know what is reasonable) 2/3 years?

I’m no expert in these things but, if it’s engineering works then how do Southern run their 2/hour service, as it’s the same track not a fancy system like Balham which had two tracks

.They both use the same platform and the same tracks.

It’d be helpful if they could put the service on to Canada Water and back where at least we can get straight on the Jubilee. As Southern run on the tracks, it doesn’t seem that it’s engineering works South of at least New Cross Gate.

Thanks for the insight - you should claim commission from the overground!!

I asked my nephew about this. So thanks to him using Google Calendar for his work diary, he’s been able to go back over the last 5 years.

So from October 2015 to October 2020, there were 524 weekend days. I can only comment on the days that I was booked to work (so nothing for rest days, annual leave etc). Of those 524, I worked 228 weekend days. Of those 228 days worked, only 54 did I have an amended job due to engineering works. (I can’t tell you whether it was full closure, part closure like nothing past NXG or no Claphams - or something silly like no trains to West Croydon after 22:00 etc, just that my job was changed from normal on that day). We had a good 2/3 years with practically no engineering closures on weekends, but since Feb/March this year, it’s been quite full on with amended jobs/full closures.

So it’s hardly 5 years of engineering works, just that when there’s a lot over a short period of time, it’s more likely that people notice the negative effect. I’d be quite interested to ask a FOI request to TfL to get a proper figure over the last 5 years, but according to “whatdotheyknow” website, they’re being very strict currently on what they will work on due to being short-staffed.

I think Isambards father built it!
The tunnel was originally built for horse and carriage traffic and changed to a rail tunnel at a later date.
Luckily wide enough for trains but as you say not that wide.

There’s also a cool little museum in Rotherhithe. It’s very small, but interesting if you’re passing by that way

Exactly that, no cab-end doors. South Western Railway did have a couple of their Class 707s for testing around New Cross Gate depot a couple of years ago for some reason. They were route cleared for the depot, Silwood Sidings and in and out of New Cross Gate station. (No idea why this was done, but they’re officially cleared to be used around there). The 707s are pretty much the same as the Thameslink 700s that go through SE23.

Thameslink Great Northern use Class 717s, which are a modified version of the 700s. They have cab end emergency exit stairs. So if they were ever to change trains, I’d bet it would be a version of these, especially as they have ATO (automatic train operation) ability. Not sure if it’s in use yet in the Thameslink core, but the ability is there.

I received an email from Ellie’s team today with the following which was sent to them from TFL. Sounds like they are committed to putting back on a more regular Overground service soon.

Although I’m sure sure if 4 tph means total (i.e. 2 tph each way) or each direction. Either way, it’ll be great to not have to travel to Penge or Lower Sydenham to get into town!

Dear Juliet,
Thank you for your email, on behalf of Ellie's constituent, regarding London Overground services
through Forest Hill.
During the weekend, Overground services to Forest Hill are scheduled to run eight trains per
hour (tph), with four tph scheduled on Sunday mornings until 12:00 where eight tph services
start.
Due to engineering works being carried out at the weekends, there has been a number of
closures on this line, resulting in the loss of rail services to Forest Hill. These engineering works
are being undertaken at Whitechapel, as part of the Crossrail project. These works were
expected to be completed this month, however this has been delayed because of Covid-19.
Works are now expected to be completed next summer. Usually, when there is no Overground
service, customers are able to use Southern services instead. However, as your constituents
have mentioned, there has been occasions where neither services are able to run because
Network Rail has closed the lines. In these instances, rail replacement buses are available to
help customers make their journey.
I understand the closures have had a significant impact on your constituents. We are planning to
run adapted services of four tph, from Shadwell to Crystal Palace and West Croydon, from
November onwards. This is in addition to any services that Southern may be running.
I hope this information is helpful, please let me know if you have any questions.
Thanks,
Hillary

Dood, I received the same response having made a complaint via Ellie Reeves, and agree it sounds positive (except for the fact that the works may continue until next summer!). It is fairly vague as to when this additional service might commence though (beginning / end of November?), and I assume it covers the weekends, which is what my complaint was about. Fingers crossed!