These charging spots have been installed these for some time, but they look almost ready, 2 spaces at the Perry Vale end of Mayow Road: 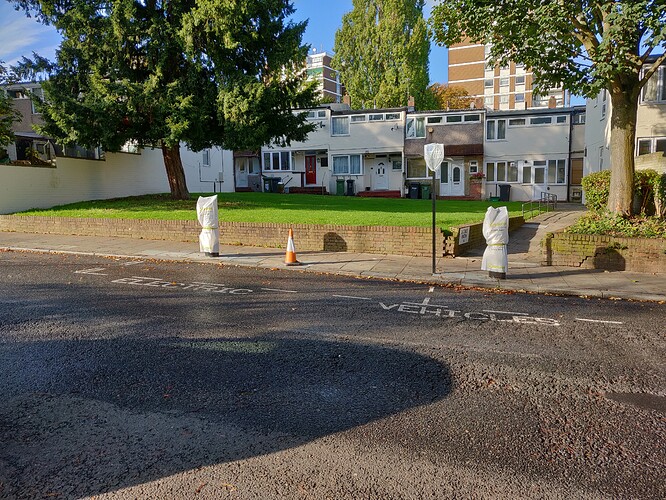 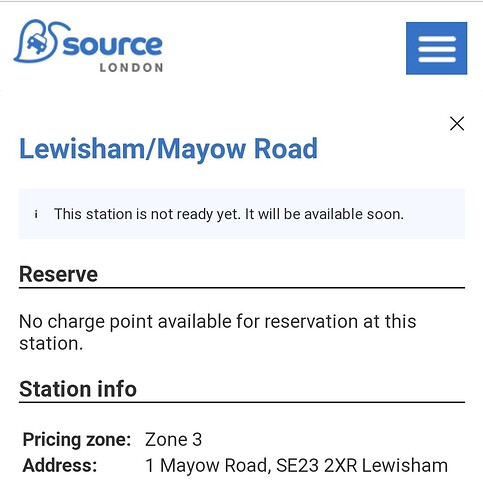 Source is nice as it claims to use 100% green energy too.

I cropped this from the Source London website - the free icons represent existing stations (the number shows how many points there are available) and the yellow icons are the ‘coming soon’ stations.

It is good to have additional options, but these chargers are relatively slow and are priced by the minute rather than by the amount of energy used. Also, those new EV parking spaces shown may be filled by Blue City rental cars (see the Sainburys’ car park charger site: https://goo.gl/maps/XbkorhYf4N71zjqCA). 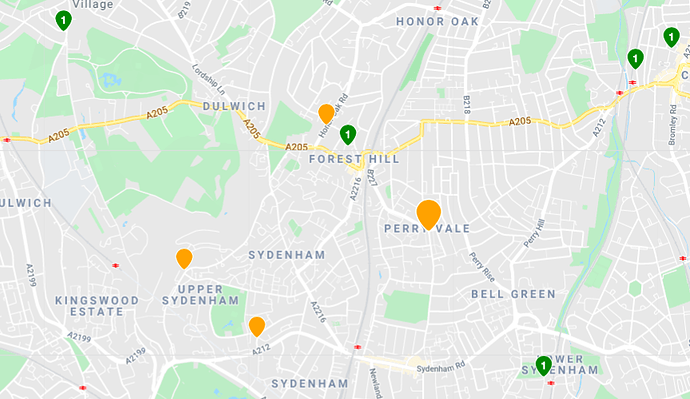 I just had reason to check the current four local EV charging point at Sainsbury’s’ car park. There are still three Blue City rental cars charging there which have been there for two weeks, one week and three days. All longer than any other car in the Council car park.

You were about right on the Blue City cars - there’s one usually parked at one of these charging spots.

After years of complaints of electric car charging stations billing by the minute and running up costs, California’s Office of Administrative Law (OAL)

It will be interesting to see how that plays out - presumably there will need to be some other incentive for owners not to leave their car parked longer than needed to charge.

I did send a shirty email to Source London a while ago and wishing a week they sent me the below message and removed two of the three cars previously parked there.

Regarding the Bluecity cars occupying this station, we appreciate your concerns and are sorry to hear that you have not been able to use these charge points.
Please note that whilst the vast majority of our stations usually have charge points available at any given time for both individual and corporate customers, a small number of “hotspot” locations may have slightly lower availability levels.
In order to improve your customer experience at these “hotspot” locations, we are currently in discussions with local councils to install additional charge points at these stations to be able to cope with demand. In the meantime, we have also requested that Bluecity vehicles are moved when needed so that charge points remain available for other Source London customers.
Regarding the Pearcefield Avenue Car Park station, Bluecity has been informed and vehicles will be moved shortly.

May not be a problem for much longer:

DUE TO OPERATIONAL CONSTRAINTS, PLEASE NOTE THAT THE BLUECITY SERVICE WILL END ON 10 FEBRUARY 2020.
AS SUCH, IT IS NO LONGER POSSIBLE TO SUBSCRIBE TO OUR SERVICE.
FOR EXISTING CUSTOMERS, FURTHER INFORMATION HAS BEEN SENT TO YOUR BLUECITY ACCOUNT AND IS ALSO AVAILABLE ON OUR FAQS. WE REMAIN AVAILABLE FOR ANY ADDITIONAL INFORMATION ON 0203 695 0500.

I think, if forced, the charge point owners in California may apply a very small, token per kW charge and a per minute “parking charge”.

The UK-wife charging network is such a farce that unifying access to the numerous networks is the current political issue and rightly so.

THE BLUECITY SERVICE WILL END ON 10 FEBRUARY 2020.

I never used the service, but I think that it is a shame that it didn’t work out. It allowed a cheap one way trip to Gatwick from Forest Hill. The only issue was that the service had a membership fee to use, so I couldn’t expense a single trip for work without funding the membership fee myself.

The UK-wife charging network is such a farce

Agreed, it’s problematic to keep the wife in anything but a mostly discharged state.

The UK-wide charging network is such a farce that unifying access to the numerous networks is the current political issue and rightly so.

Going off topic here, but… isn’t it just like any new technology? We see lots of companies competing to get a foothold and pouring money into it projects before they eventually give up, fail or merge.

The good thing here is that infrastructure is being built, and that has intrinsic value which is likely to be sold on as an asset rather than lost, even if the owning company does fail.

To me it’s reminiscent of the upbringing of UK cable operators. From Wikipedia, the abridged history starts back in 1984 when we had Croydon Cable, who were bought by United Cable, who in turn later merged with United Artists Cable International. They then merged with Tele-Communications International, who started a joint venture with US West - making Telewest.

Telewest then merged with SBC Communications, picking up franchises from the Midlands and North West, before merging with General Cable and picking up further franchises in Yorkshire, West London and Birmingham, as well as Birmingham Cable, and then Cable London themselves.

Telewest then merged with Flextech before acquiring Eurobell. After a quiet period of five years, the NTL acquisition/merger happened, then the Virgin Media rebrand in 2006.

The history of this is also (literally) cast into some of the infrastructure that each company and franchise installed, and the ‘lid markings’ in telecoms manhole covers still have a variety of names as testament to this. For those geeky enough, see the section “A Word About Manholes and Chambers” on the following deliciously geeky article:

Let’s just hope the EV revolution is significantly faster than the 20-odd years it took cable TV to consolidate across the UK.