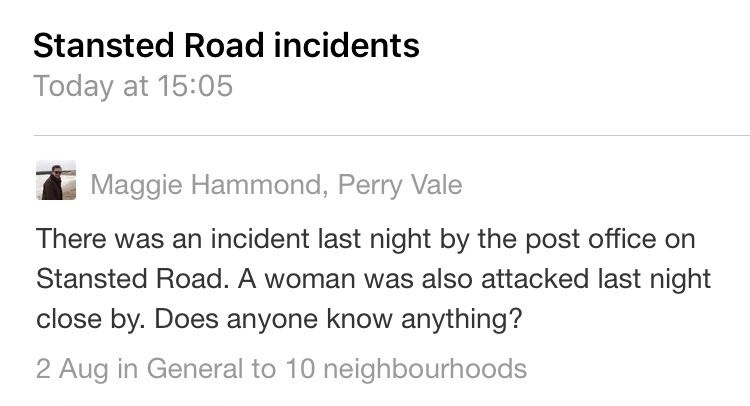 Does anyone have more info on this??

Apparently there was a stabbing in the newsagents next to the post office.

I heard screams last night just before midnight (I live in Stanstead road). Partner and I poked our heads out the window but couldn’t see anything. Jogged past this morning about 7 & all clear. However I read on elsewhere that there was a stabbing near to the post office mid-morning but no other details (not sure how accurate the latter bit is).

A woman was attacked on Tuesday night whilst walking her dog - I’m not sure if he was caught or if linked to post office attack. Also I think (this may not be correct) there was another attack on a woman on Northwood Road on the same evening. Without wanting to scaremonger, it’s very worrying and worth being extra vigilant.

These two incidents are unrelated I believe. From what I know the stabbing on Stanstead rd on Wednesday morning was carried out by a man in his late 50s who was arrested. Apparently on Tuesday night a woman who lives down Marler rd was walking her dog at the corner of Fermor rd/ Stanstead rd when a young man tried to strangle her and pushed her against a tree causing an injury. Prior to that another woman was attacked down Northwood rd. Police and an ambulance were called but no one was arrested. Any other info I get i will post on here.