Stuff being nicked from my front garden

Since moving here from zone 1, I’ve discovered the disconcerting truth that there appears to be more crime here than inner city London. I repeatedly have things nicked from my front garden - most recently a bath I was saving for someone, which was (I thought) buried sufficiently under a bit of rubble.

The bit that alarms me the most is that I was home all day and they clearly waited for the 10 mins I ducked out to go the shops.

Can’t say I ever had anyone helping themself to stuff in my garden when I lived north of the river. Am I just unlucky or is this a common issue?

I have to say I’ve never had a problem with general thievery from the garden, and scrap collectors have only taken stuff clearly left at the boundary for taking. I don’t know if you can generalise your experience to all of South London being more crime prone than north of the river, but I’d be interested to hear if other people have a problem with this.

I’m not trying to generalise my experience to all of South London - I’m commenting on my experience, hence my request for other people’s experiences.

In nearly 2 decades of living in central London, I have had 1 item nicked - ironically, a criminal law textbook. Since being here, I have had well over two dozen instances of people coming onto my property and nicking stuff. The disparity has shocked me, and the narrow window of opportunity exploited by today’s thieves unnerved me.

That really does sound unusual. I’ve lived all over London and never had that experience anywhere. As I said, would be interested to hear what other’s think.

Maybe it’s your neighbour if the instances are so timely and frequent.

Lived here for almost 20 years and had one instance of a greenhouse frame getting taken by scrappies. It wasn’t valuable and looked like rubbish but I was really annoyed - other than that I have left stuff on the boundary for the taking and it always goes. I wonder if the practice of doing that has encouraged people to be a bit more “adventurous”??

Two dozen instances seems extraordinary you must have some fantastic stuff in your front garden. I have left scrap metal in the front on the boundary and have had to stop a scrsp van snd plead for it to be taken. I would suspect it may be someone being mischievous?

Perhaps it’s your neighbours fed up with a front garden in their street full of old crap like rubble and baths etc. Just a possibility… I’ve lived in SE London for getting on for 20 years and have had nothing taken from the garden. Even had Amazon pachages sat on the step for hours and not taken.

Bit weird that you appear to have been targeted somewhat for whatever reason and by sounds of things maybe by someone/s who live within view or near walking distance.

Much like the majority here, I’ve been in Sydenham/FH area for over 3 years and just moved to Sydenham/Penge area had all sorts of packages, big, small, worth little or lots left on doorstep with nothing ever taken.

I agree with the other comments on here, that maybe it is a neighbour. We generally have people knock in our door to ask if they can take whatever we have left out, even when it’s been outside our boundary. The only bizarre thing we have had happen a few years ago, was when someone cut all the heads off our roses one Saturday night in our front garden!
Maybe you need to put a clear note on anything you don’t want removed stating the obvious!!

I find this quite.bizzare too. I have never had anything stolen unless I put a take please sign for all to take xx
"

Might depend where you are. A lot of people leave stuff in their front drive to be collected. Do you live on a main road or side road, and do you have part drive \ part garden?

I generally leave stuff out I don’t want anymore that gets taken, I’ve once had stuff taken when I left the side alley open (I did actually want to get rid of it, but thought it was a bit ‘cheeky’ that someone took it from there.

I’d say your experience on the whole sounds unusual - perhaps some cheap CCTV might reveal the culprit (s), or stop it. The number of occurrences certainly sounds high, though I expect a lot of people in reality don’t have a lot of things that people want to take from gardens.

Good luck, not a great introduction to the area, but hopefully your experiences will be more positive in the future.

As an aside I used to live in Shepherds Bush and have also felt there is less crime here (anecdotally admittedly), and felt much safer

Lived there for 16 years and the scrappy had away with some copper pipes and an old radiator. Also had Amazon parcels in plain view that never went. Cast iron bath or plastic BTW?

This is where the Amazon delivery guy ‘hid’ my parcel last week. Was like this for several hours and still no one pinched it! 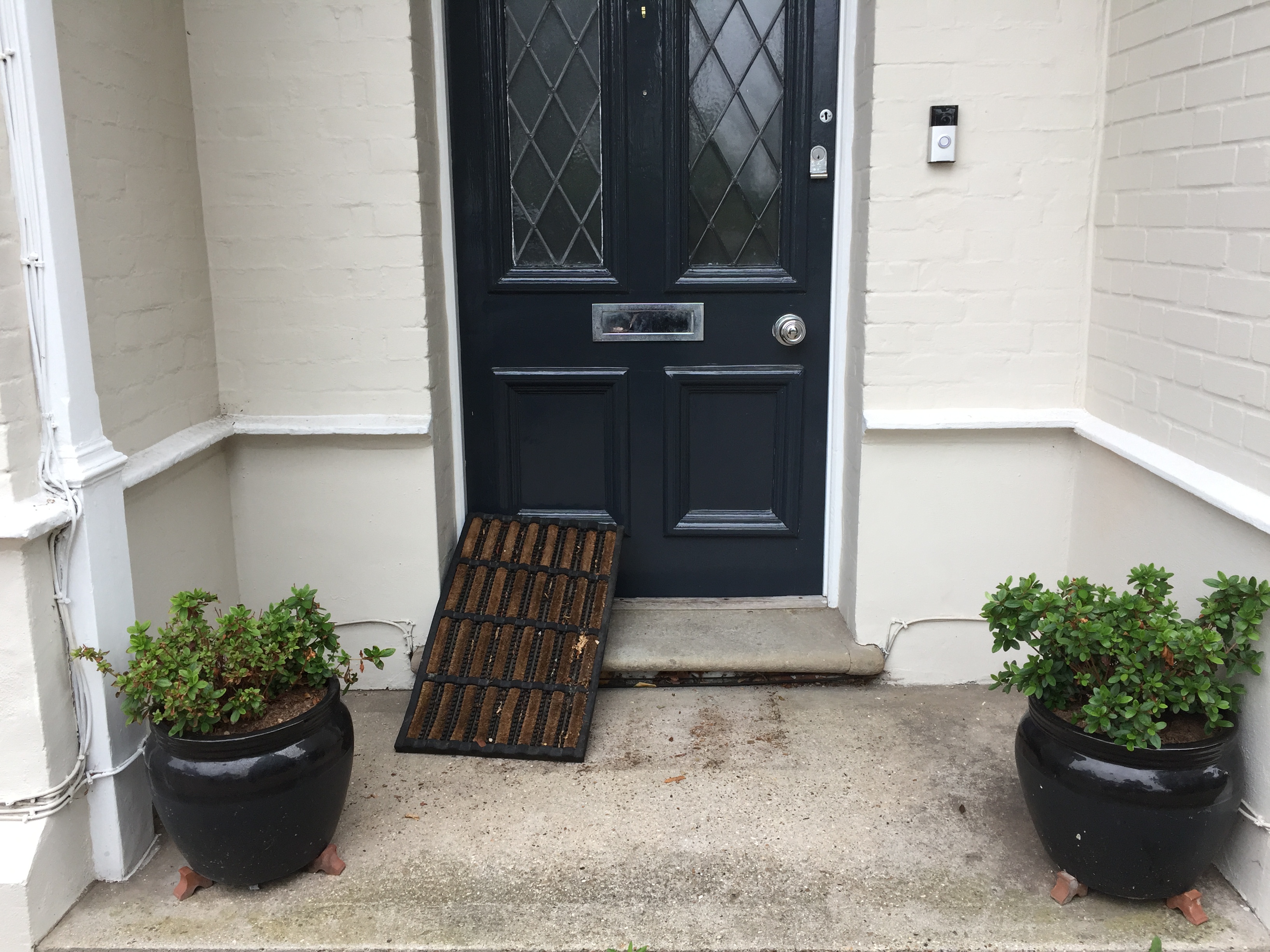 @FaeryCatmother - what sort of stuff do you have in your front garden that’s getting pinched? I can’t think of several dozen items that could be stolen from mine so now I’m intrigued.

This is where the Amazon delivery guy ‘hid’ my parcel last week. Was like this for several hours and still no one pinched it!

Lol, at least they hid it. Mine just got sat on the top of the steps.

My experience is quite positive. Things that I want recycled I put with a note and it usually goes quite quickly. We did receive a couple of knocks on the door to say is it still ok to take the stuff.

Then there are those occasions when you forget to get the keys from the lock and get a knock on the door to remind you. I’ve been on both sides of the door.

Before we moved to Forest Hill I did a ton of research about crime rates, etc… mostly because I couldn’t understand why SE London had a bad rep. Turns out it’s an old rep and crime rates are higher north of the river. That being said we did just have a bike nicked from the front garden. It was locked up, however, my husband failed to lock it properly and the thief removed the wheel which freed up the frame - tough lesson for us to learn. It was the week we had several extra people on the street doing the water meter ‘stuff’ so I suspect someone spotted the bike and came back in the middle of the night with tools.

I wish someone would come along and steal my old junk.

I’ve been in FH 7 years and my upstairs neighbour has done all sorts of bizarre things during this time… like taking a chain saw to my garden fence and intentionally flooding my bathroom. Seriously does sound like it could be someone closer to home if my experience is anything to go on. People are weird.

Never had anyone nicking stuff unless I put a help yourself sign on it! Lived here for about 17 years now & only had rubbish I asked folks to take taken, which was a result